Jack Williamson was awarded the Paderewski Gold Medal in the piano auditions sponsored by the National Guild of Piano Teachers. He received a “Superior Plus” rating performing before guild adjudicator  Katherine Santiago.

Jack is a piano student of Joyce Harwood. 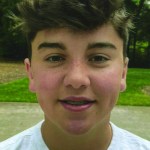 He has played a 10-piece memorized program for 10 years in the National Piano Playing Auditions. Jack’s program consisted of pieces by Tchaikovsky, Bach, Haslinger, Kabalevsky and contemporary composers.

Jack is an eighth grader at North Stanly Middle School, where he is a member of the Beta Club and plays many sports for the Comets. He enjoys NCSU athletics, being outside, listening to music, water sports and swimming. He plays basketball for the Stanly County Bombers.