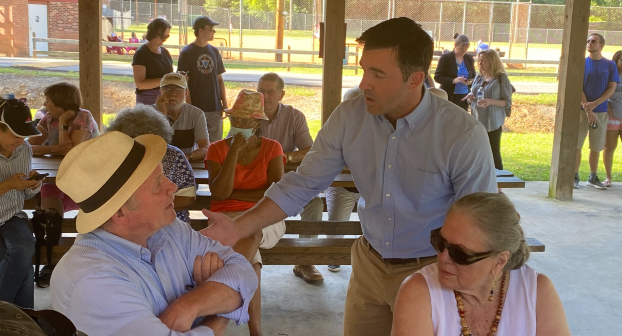 Late last year, Jeff Jackson was still mulling whether to run for U.S. Senate in 2022. As the father of three young kids, the state senator, who represents part of Mecklenburg County, even printed out a schedule detailing how much time U.S. senators typically spend in Washington, D.C.

But after he and his wife Marisa watched as insurrectionists stormed the U.S. Capitol on Jan. 6, a decision was quickly made.

“We’re watching it in silence for a little while and after a little while she said, ‘I think you need to run’ and I said ‘I think that’s right,’ ” he told the Stanly News & Press Thursday evening before speaking at a town hall event in Albemarle.

A few weeks later, Jackson, a Democrat, formally announced he would run to replace U.S. Sen. Richard Burr, the Republican incumbent who is not seeking reelection.

“I think people, their expectations have become so low when it comes to federal elected office that it allows for events like that,” he said, referring to the storming of the Capital. “I just want to show people they deserve so much better than they’ve seen from their U.S. senators.”

He’s also running to make sure a similar event like the Jan. 6 insurrection never happens again.

Jackson, 38, spoke to a crowd of about 60 people at Rock Creek Park as part of his initiative to visit all 100 N.C. counties in 100 days. Jackson talked for about 50 minutes — the majority of which was a question-and-answer session with the public — addressing issues such as voting rights, climate change and combating misinformation. 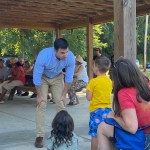 Jeff Jackson talking with a young boy before he speaks at Rock Creek Park Thursday evening. 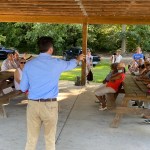 Jeff Jackson speaking to a crowd of about 60 at Rock Creek Park.

Having toured Stanly Community Christian Ministry earlier in the day, Jackson opened his speech by highlighting all the work the organization is doing in the county. “It’s a remarkable operation. It is just a hub of activity,” he said. “It’s just an amazing asset for your community.”

Jackson mentioned that traveling all across North Carolina might not necessarily change voters’ minds in certain counties and that as a Democrat, he could just focus on urban areas, such as Mecklenburg and Wake counties. But traveling to every county allows him to learn about key issues affecting people in different parts of the state.

“If I’m running on a campaign that’s premised on delivering a shock of good faith to the political system, you can’t ignore 90 percent of the state,” he said. “You have to go places, even if you know it’s a very long shot.”

Jackson likened the race to a job application and emphasized that he wanted to earn people’s trust, telling the audience that “all of you get to decide whether or not to hire me.”

He briefly talked about his background and how he became a state senator. After having served in Afghanistan as part of the United States Army Reserve (he continues to serve as a captain in the Army National Guard), Jackson graduated with a law degree from UNC Chapel Hill and became a prosecutor in Gaston County. In 2014, at the age of 31, Jackson was selected to rwitheplace former State Sen. Dan Clodfelter, who resigned to become mayor of Charlotte.

Jackson spoke about many of the issues he’s most passionate about, and that he’s heard from people across the state, including making preschool more affordable (he said the average price a year is $9,000) and expanding Pre-K education programs, addressing the need for more high-speed internet in rural areas and ending gerrymandering.

Jackson told the crowd about what he calls his gerrymander challenge, which he’s talked about for years but no one has ever completed. “It’s simple,” he said, “just finish the sentence: Drawing districts to rig elections is ethical because ____.”

Jackson also talked about the need for expanding Medicaid, which he said is popular with both parties in private but politicians are scared to support it publicly for fear of being associated with Obamacare. He also wants to increase teacher pay and make sure each school has additional resources (more teacher assistants, school psychologists and social workers) to better meet students’ needs.

When asked about how he will deal with misinformation, which seems to run rampant across all social media platforms, Jackson stressed the best way to combat it is not with fact-checks but with politicians actually meeting and talking with people.

“You got to give them a sense of who you are and you’ve got to do that before the misinformation hits so when it does, folks will say, ‘Actually, Jeff’s been to Stanly a few times and that doesn’t sound like him,’ ” he said.

When someone brought up climate change, Jackson mentioned he would roll out a Climate Action Plan “that’s specific to our state.” He said North Carolina is one of the best states at harnessing solar power and could be a key player when it comes to offshore wind and hydroelectric power.

“What we want to do is give you a climate action plan that visualizes what tackling this would look like in a way that’s hard for the misinformation to latch onto,” Jackson said.

He said he wished more members of Congress had diverse backgrounds that were more reflective of the people they represent.

“I do think it would be great if our U.S. Senate had more people with three kids, two car payments and a mortgage,” said Jackson, drawing from his own personal experience.”I think that’s a dose of reality that place deserves.”

Jackson told the crowd that if elected, his top priorities would be to help pass the John Lewis Voting Rights Act, which would restore and strengthen parts of the Voting Rights Act of 1965, end gerrymandering, which he said has been “the bane of our political existence as a state,” and pass the Disclose Act, a campaign finance reform bill to fight dark money.

When it came to the topic of police reform, Jackson said he supported the federal George Floyd Justice in Policing Act, which aims to combat police misconduct, excessive force (it would ban choke holds), and racial bias in policing. It’s been passed by the House but is currently stuck in the Senate.

Jackson said that the definition of first responders needs to be broadened beyond law enforcement to include mental health care workers, psychologists and people trained in crisis de-escalation.

“As citizens, we should have the opportunity to call for help in a situation that doesn’t necessarily need an armed response,” he said.

He said that systemic racism exists in the country and can be seen in the ways Black people are treated in the criminal justice system, the healthcare system and housing. He said it’s important to acknowledge that Black lives matter and that it’s critical to “teach the history that your nation actually had.”

Jackson stressed that he wants to run his campaign in a way where he can work to earn voters’ support.

“I think this can be a campaign that makes you proud to be from North Carolina,”Jackson said.