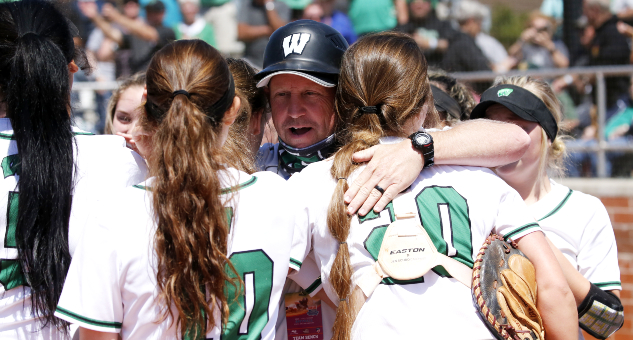 Coach Craig Carter celebrates with his players after the Colts won the 2019 2A state championship. (Photo by Charles Curcio/staff)

Carter led the Colts fast-pitch program over the past four seasons to an impressive 76-4 overall record, while capturing two state championships (2019 and 2021) and finishing with a perfect 36-0 record against Rocky River Conference opponents.

“It has been a wonderful 18 years coaching at the high school level and I have many treasured memories…none more special than my last 4 years at West Stanly High School,” Carter said.

West Stanly High School athletic director Daniel Smith said he was “appreciative of Coach Carter’s efforts with the softball program, as well as his support of the entire athletic program during his time as coach.”

Emily Smith, an assistant on Carter’s coaching staff, will take over as head coach of the softball program. Smith served as a West Stanly assistant coach from 2017 to 2019 and again in 2021, helping the Colts during both recent state championship runs. During the 2019-20 school year, she worked as an assistant coach at Catawba College.

Smith, formerly Emily Brooke Huneycutt, was an All-State and All-District pitcher at West Stanly. A four-year varsity player, the Colts won 85 games during her high school playing career from 2007 to 2010.

Following her time as a student at West Stanly, Smith went to play four years for the Catawba Indians softball program as a pitcher from 2011 to 14. She was named an All-South Atlantic Conference selection as a freshman in 2011 and finished her collegiate career with 38 pitching victories (fifth-most in program history) while posting a 2.43 career ERA in the circle (sixth-best in program history). During her sophomore season in 2012, Smith was a team member of the program’s first NCAA regional appearance.

“I am very excited and honored to be given the opportunity to be the head coach of West Stanly Softball,” Smith said. “This program is very special to me. It has so much tradition and success, and I am excited to keep that going. I have enjoyed coaching with Coach Carter and will cherish those memories forever. I look forward to getting back to work with our team.”