‘You are part of history’: Students, families get vaccinated at Albemarle Middle clinic 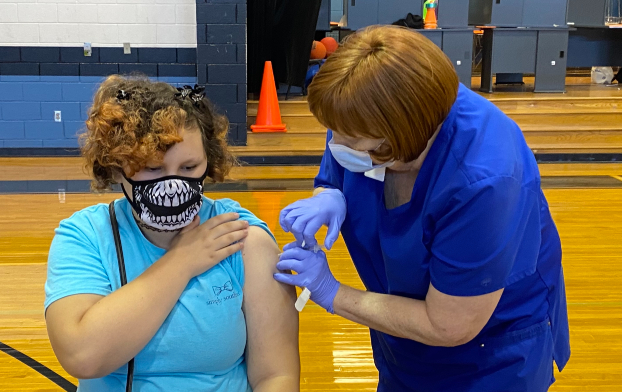 Laya Miller, a 12-year-old student at West Stanly Middle, gets her shot of the Pfizer vaccine.

About an hour and a half into the vaccine clinic at Albemarle Middle School Wednesday morning, more than half of the available 50 first doses were used up.

But officials with the Stanly County Health Department, who helped organize the event, retrieved more.

“That’s an awesome problem to have,” said Jennifer Layton, public health educator with the health department, who oversaw the operations.

The clinic, which ran from 9 a.m. until 1 p.m. inside the school’s gymnasium, was targeted for young people ages 12 and older. Around 30 people had signed up for the event, though Layton said the first hour consisted of mostly walk-ins, including several parents.

By the end of the event, 56 people had been administered vaccinations — 43 young people and 13 adults older than 18, according to data from the health department. Twenty-six were walk-ins.

The second shots will be administered July 14 at the same scheduled time as Wednesday’s event. Prizes will also be raffled during the second clinic; raffle tickets will be given out to each person that gets their shot.

Young people were given a dose of the Pfizer vaccine, the only vaccine that’s FDA-approved for kids younger than 18. In the clinical trial for children ages 12 to 17, the Pfizer vaccine was 100 percent effective at preventing COVID-19.

“We knew this needed to happen,” said Beverly Pennington, Stanly County Schools director of student services. “We had done the employee vaccination in conjunction with the health department and this just seemed like the next logical step, wanted to target our summer school kids.”

In addition to not having to wear a mask when out in public, the big benefit of getting vaccinated, Layton said, is that people don’t have to quarantine if they’re exposed to someone who has the virus unless they develop symptoms.

The clinic was placed at Albemarle Middle since the school is hosting middle and high school students from across the county taking part in the summer learning program.

“To me, it’s really exciting to see families do it together because they’re protecting each other and their extended families,” Layton said.

She encouraged students and their families to savor the moment and even take pictures of their loved ones getting the shot because they are part of something that’s never happened before.

“You are part of history,” she said she told them. “It doesn’t seem like it right now, but when you’re telling your children and grandchildren one day, ‘I went through this and I was part of the vaccination effort,’ you’re part of history.

Pennington said vaccinations are the best way to minimize any future school-related outbreaks and ensure that students remain in class in a normal setting. At the worst of the pandemic, in December and January, Pennington noted that around 700 students were quarantined at one time along with roughly 200 staff.

“If we have a higher vaccination rate than we have a lower quarantine rate,” she said.

In Stanly County, 420 young people ages 12 to 17, as of Monday, had already received at least one dose, according to the health department, representing 9 percent of the total population in the county.

In brief interviews with several students and their families who got vaccinated, the overriding reason for doing so was to protect their health and to hopefully get some sense of normality back in their lives.

“I’m just anxious for the schools to get back,” said Jennifer Smith, who was with her 14-year-old son Colson, a rising freshman at South Stanly High. The vaccine, she said, represented a chance for her son to have a regular school year.

As for Colson, he wanted the shot “so I can start traveling again.”

Travon Blount, a rising freshman at Albemarle High, got vaccinated along with his mother, Ebony Chambers. As someone who wants to play football next year, Blount wanted to get vaccinated to lessen the chances that a possible outbreak could occur that would put the season in jeopardy. Several sports teams last school year had to cancel games or even forfeit playoff matches due to COVID-19 protocols. 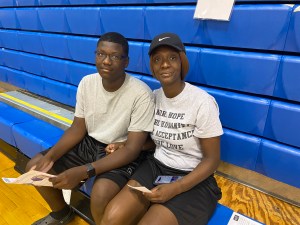 Travon Blount and his mom Ebony got vaccinated at the clinic at Albemarle Middle.

Shelia Brown wanted her 15-year-old granddaughter Nadia Lindsey, a rising sophomore at Albemarle High, to get vaccinated so she could be around others.

“She’s around a lot of people at church and activities and I just want her to be safe.”

Tonya Barbee, who works at Atrium Health, said her 13-year-old son Diesel, who attends North Stanly Middle, got vaccinated to protect his immediate family, including those who are more vulnerable to getting sick.

“We want to not only protect him but everybody that’s around him,”she said.