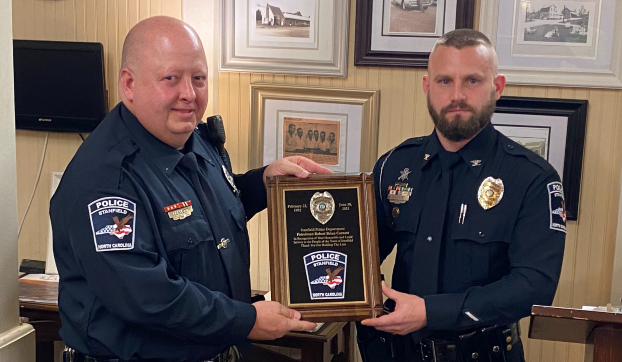 The Stanfield Town Council on Thursday night took time to recognize the nearly 30 years of service Officer Brian Cornett has provided to the town.

Cornett, who began his career with the Stanfield Police in February 1992, is set to retire Wednesday.

“During his career, Officer Cornett has always answered the call, and no matter the risk or how dangerous it may be, he was always professional and helpful,” said Police Chief Corie Faggart, who noted he started and ended every shift during his career “with the goal of making our community safer.”

Faggart mentioned he has found himself in a few precarious situations while working alongside Cornett over the years and “I’m certain if it weren’t for him during those times, I might not have made it home that day.” 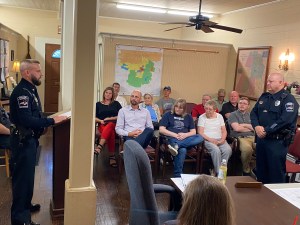 After his speech, Faggart presented Cornett with a plaque commemorating his service to the town.

In a short speech before council, and a full crowd in attendance, Cornett, 53, said while many people have a job they don’t like or feel passionate about, “I can’t say that. I’ve enjoyed working here and I’ve never felt any hesitation getting ready to come to work in the morning.”

“This has been pretty much my life’s work,” said Cornett, who grew up in the town. “I’ve been doing this as long as I can remember.”

He plans to spend more time with his family and is looking forward to fishing. After taking some time off, Cornett hasn’t ruled out coming back to the force on a part-time basis.

“You’ve brought a lot to the town and we hate to see you go,” Mayor Kevin Barbee said. “We wish you the best on whatever you do next.”

A drop-in retirement party for Cornett will be from 12:30-1:30 p.m. Monday at West Stanly Christian Ministries, 211 W. Stanly St., Stanfield.