Barringer to retire after 42 years at Stanly hospital

While taking a first aid class at Rock Creek Park as a teen, Peggy Barringer was introduced to what was known then as “artificial respiration.”

“At that time,” she said, “this was taught almost solely as a means of reviving drowning victims, and I thought, ‘why could this not be used on someone who has had a heart attack?’ ” 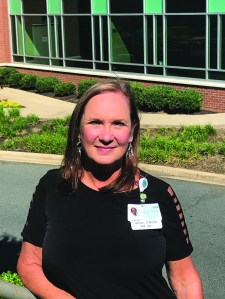 It was that inquisitiveness that drew the young lady from the Plyler community, who will retire on Wednesday with 42 years of service to the people of Stanly County, toward a career in health care.

Barringer, who earned degrees from Gardner-Webb in 1979 (Associate) and 1995 (Bachelor’s), and from Bellevue (Master’s) in 2005, got her start at what was then Stanly County Hospital.

“I started out at the old (hospital) building,” she said, (referring to the old four-story structure which stood on land adjacent to the current facility) “before we moved to the new one in 1981.”

Around the same time as the move to the new facility, Barringer made a change that would define the
remainder of her career.

“My first two and half years I worked in obstetrics,” she recalled, “and then I moved to the OR (surgery).”

As a surgical assistant in a new and modernized hospital building, Barringer landed in a perfect position to see and experience updates in equipment, procedures and record-keeping over the next four decades, and spoke about a number of these changes.

“When I started out, we calculated the flow rate of IVs using a watch and counting the drops. Now, these are set up with ‘smart pumps’ that automatically assure a proper dosage,” she said. “And medications were delivered to patient rooms on a cart and tray with the appropriate pills in little cups, whereas now we have carts that are set up which allow us to scan the patient’s information to get the proper meds.”

“Records were all kept in file folders (in the past),” she said. “Now everything is electronic.”

And in the operating room, changes to improve patient safety and recovery time have evolved over the years, with surgical procedures and sterilization at the leading edge.

“For example, nearly all surgical supplies come pre-packaged to assure that they are sterile,” said Barringer. “And cloth surgical gowns that required sterilization have been replaced with single-use paper ones.”

Minimally-invasive surgical procedures have also become the norm, she noted, and cited an example.

“In 1991, the first surgery here using a laparoscope was performed for a gall bladder procedure, and it’s pretty commonplace now. But prior to that, that type of surgery required an extensive incision and long recovery time.”

Yet, despite technical advances and improved procedures, unforeseen issues such as the COVID-19 pandemic occasionally surface, and Barringer lamented the virus’ devastating effects on both patients and families.

“It’s been a tough time,” she said. “It (COVID) took away the support system for our patients,” referring to the prohibition of visitors necessitated by the virus’ contagiousness.

Life as a surgical professional has required long periods of time away from home, and Barringer credits her husband David, an electrical contractor, for his patience and presence as the couple raised sons Justin and A.J.

“He has been Mr. Mom quite a lot,” she said, “because I’ve essentially been on call 24 hours a day.”

According to Barringer, the couple’s retirement plans are quite simple.

”We’re looking forward to spending time with our grandchildren and traveling.”

Working with numerous other medical professionals and under five different organizations over 42 years, Barringer says that one thing has remained constant.

“It’s all about the patients…that’s who we are here for,” she said. “We have a great team here, and I’m able to leave at a high point. I’ve loved it, and I can’t imagine having done anything else.”