Two years ago, well before COVID-19 emerged on the scene, Stanly County was reeling from another deadly epidemic: substance abuse. Stanly was consistently ranked for a number of months as the number one county in the state when it came to opioid overdoses.

Stanly’s struggles though did provide a silver lining in one respect: it attracted some much-needed attention from the Charlotte-based Center for Prevention Services, which awarded a five-year, $1.26 million Partnership for Success Grant (PSG) two years ago to serve Stanly. The grant, funded by the Substance Abuse and Mental Health Services Administration, began October 2019 and is scheduled to run through Sept. 30, 2024.

The grant provided Stanly with more than $500,000 in 2019 and 2020 for initiatives to curb substance abuse. CPS is slated to spend around $253,000 for 2021. These prevention efforts have included, among other things, educational outreach to students, coordinating medication take back events and bolstering Stanly County’s Project Lazarus Coalition.

“Despite of the pandemic, we feel like we have achieved a lot,” CPS grant manager Neetu Verma said. 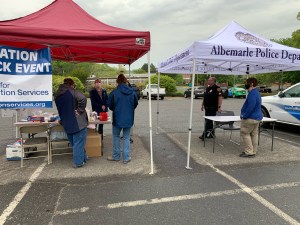 Establishing a foothold in the school system

While the grant is multifaceted and targets many areas, one of the biggest has been educating students about the importance of substance use prevention, including getting them to feel comfortable talking about tough subjects like substance use and mental health. There’s often a reticence in many communities, especially smaller, more rural ones like Stanly, to discuss sensitive topics like whether young people have access to substances such as alcohol and tobacco — which is why the Partnership for Success grant is so critical, organizers said.

“I think with our presence being here, that door has been opened and now they’re having to talk about it and we’re putting programs into the schools,” said CPS youth coordinator Kaitlin Smith, who has been the person working directly with students across the county.

A 2019 East Carolina graduate with a degree in public health, Smith was hired by CPS to establish Teens for Change clubs at each of the area high schools to foster relationships with the students and educate them about substance use prevention, including the dangers of drugs and vaping. The idea was that as a young person herself, Smith, 24, could serve as a close confidante, whom students would feel comfortable talking with.

Aside from various substances like alcohol and tobacco, other topics that were discussed included ways to improve students’ mental health and their self-confidence.

She had already established a steady presence at West Stanly and was looking to broaden her impact to the other schools, when the pandemic hit last spring. Since she could no longer forge in-person connections with students, Smith pivoted and began providing assistance in other areas. She helped with CPS’s medication take back events and began meeting once a week with Albemarle Middle students, as part of the after-school SPARK program.

With Covid cases continuing to decrease and with more people getting vaccinated each week, Beverly Pennington, director of student services with Stanly County Schools, anticipates Smith will be able to resume her work establishing Teens for Change clubs at the high schools next school year.

“It is my hope that we will be able to open up, have support people such as Kaitlin come in and work with our students and have after-school activities,” Pennington said.

Implementation of a Youth Drug Survey

When asked about the biggest accomplishment of the grant to date, Verma mentioned the implementation of the Youth Drug Survey, which was completed last spring by 1,226 sixth, eighth, 10th and 12th graders from 11 schools in the county. Students answered a multitude of questions about how often they used substances including alcohol, prescription drugs, marijuana, e-cigarettes and cigarettes. The survey was anonymous and students had the choice to not participate.

According to the results of the survey, which CPS shared with the public in December 2020, more Stanly County youth were using electronic cigarettes than any other substances, including alcohol.

Overall though, the results seemed to be encouraging.

“What I’m happy to see is that the numbers are low in Stanly County and I think they’re going to continue to drop in other places where we’re having strong prevention efforts,” said Andrew Reynolds, a consultant with Common Good Data, who co-authored the youth survey. “Prevention is effective and it works and it’s one of the best ways that we can address substance use not only now…but as youth get older.”

This was the first drug survey administered in Stanly County, Verma said, which provided a critical window into the kind of substances popular among the county’s young people. The YDS was designed by CPS more than 30 years ago for students in Mecklenburg County and has been in continuous use with Charlotte Mecklenburg Schools ever since.

“This survey gives us a look at youth perspectives on substance use including which substances youth in the county are aware of and possibly using,” said Wendy Growcock, public health specialist with the Stanly County Health Department. “The YDS data informs all agencies in the county working with youth or with substance use prevention how to target their efforts.”

Stanly County Schools used the survey results to assess its needs and help decide where resources needed to be spent, Pennington said. As a result of the YDS data, along with other data points, the school system will be funding a coordinator for social, emotional and mental health services for next school year.

A second group of students (sixth, eighth, 10th and 12th graders) will complete the survey at the end of October, Verma said. She hopes to have more student participation this time.

Another key part of the grant has gone towards training Stanly County Schools staff in the Botvin LifeSkills Training program.

It is an evidence-based prevention program backed by more than 30 scientific studies that has been shown to be effective in reducing alcohol, tobacco, marijuana and other drug use. According to its website, its programs are used in many states across the United States along with more than 30 countries around the world.

“The teachers enjoyed having this resource available to them,” Pennington said, noting they no longer had to search for lessons that met specific parts of the standardized curriculum for health instruction. “And students have found that it is helpful and have enjoyed learning more about the different components that it covers such as decision-making and not falling into peer pressure.”

Some of the other major initiatives over the past two years have included: 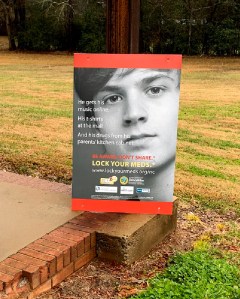 A poster for the “Lock Your Meds” campaign. Photo courtesy of Neetu Verma.