After this investigation, detectives arrested Johnny C. Knotts, 58, of Badin for second degree sexual exploitation of a minor. 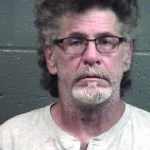 Further investigation led detectives to Willow Street in Badin, where a search warrant was conducted with the assistance of the Badin Police Department. Upon execution of the search warrant, narcotics were found in the residence.

He was also charged with possession with the intent to sell and deliver schedule VI.

If anyone has any further information about this case they are asked to contact the Albemarle Police Department at 704-984-9500, or an anonymous tip can be left on the Tipline at 704-984-9511.