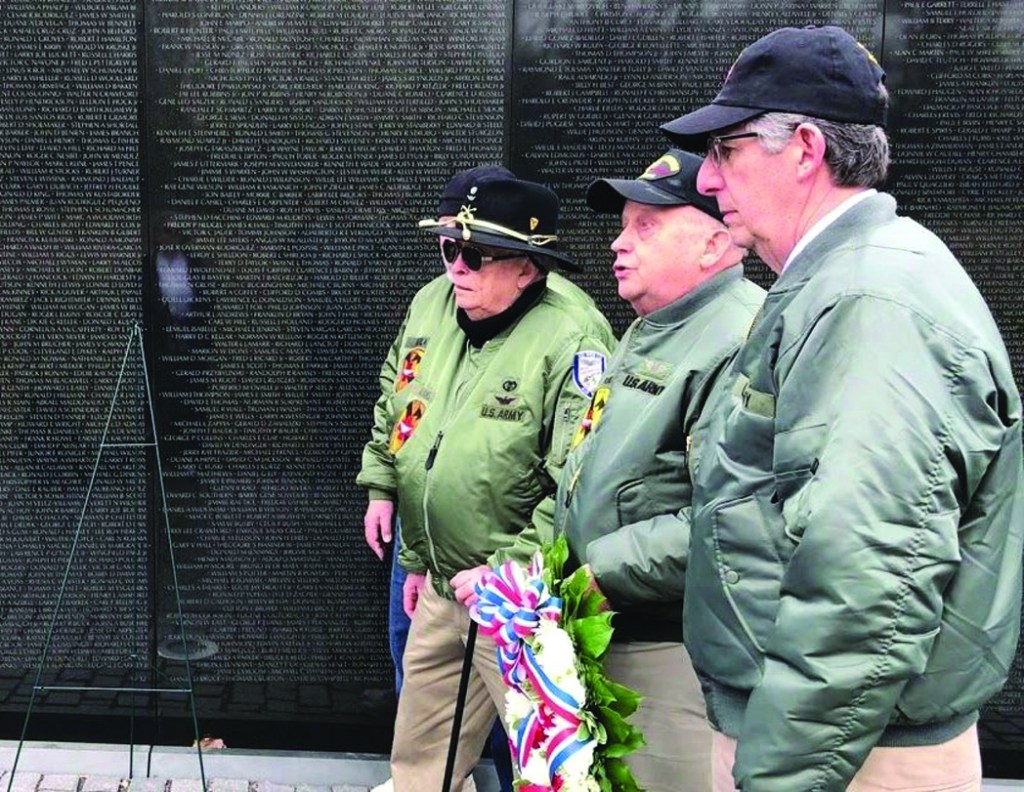 Valentine’s Day brought nothing resembling sweetness to U.S. troops stationed in Tay Ninh province in South Vietnam in 1969. And for surviving members of a U.S. Army 15th Medical Battalion UH-1 (Huey) crew who were dispatched there to evacuate a wounded soldier, the events of the day launched five decades of dark memories, only recently eased through the efforts of a number of fellow veterans.

While returning to base that day from a mission north of Saigon, the five members of the Medevac 12 crew — Cmdr. Walt McNees of Asheboro, Pilot David Adams of Fredericksburg, Virginia, Door Gunner Ralph Tutrani of Valley Forge, Pennsylvania, Crew Chief Gary Dubach of Ashtabula, Ohio and Medic Steve Schumacher of Minneapolis, Minnesota — answered a call to the Phu Khuong district, where a seriously injured South Vietnamese Marine was in immediate need of medical transport.

Ken Furr of Albemarle was stationed at Phu Khuong as a USMC advisor to the South Vietnamese Marines, and saw the chopper approaching. But unbeknownst to him and the Medevac crew, North Vietnamese forces were nearby, unseen through the dense vegetation.

“They really opened up on the helicopter,” said Furr, who was startled not only by the sudden attack, but by its proximity as well.

Damaged by the heavy fire, the Medevac unit turned sharply away, and was notified by radio from following aircraft that they were flaming and leaking fuel, leading to a decision to ditch the aircraft. But with no clearing in sight, the crew was forced to make a hard landing in the thick bamboo, where they immediately drew enemy fire.

Dubach and Schumacher, who exited the aircraft to set up a defensive perimeter, were immediately killed.

“The official report stated they were struck and killed by the helicopter’s rotor blades,” said retired U.S. Army Air Cavalry Sgt. David Barron, who later recovered the actual helicopter. “But,” he added, “the crew does not believe that account to be true.”

McNees, pinned inside the craft with Adams and Tutrani, remained on the radio to broadcast the craft’s location in an effort to summon assistance to the damaged airship, which was five miles away from the nearest friendly force.

“Medevac units had no armament,” said Barron, who noted that the crew had little, other than their sidearms, with which to defend themselves.

Maj. David Henderson, who, like Furr, was serving as a USMC advisor, was directing a Command and Control (C&C) helicopter over the battle area when he was notified that Medevac 12 was down. Although Henderson’s chopper was carrying seven passengers with a dwindling fuel supply, he directed his pilot to fly to the disabled unit.

“In flying helicopters, weight is everything,” Barron said. “Many would not have attempted such a rescue.” 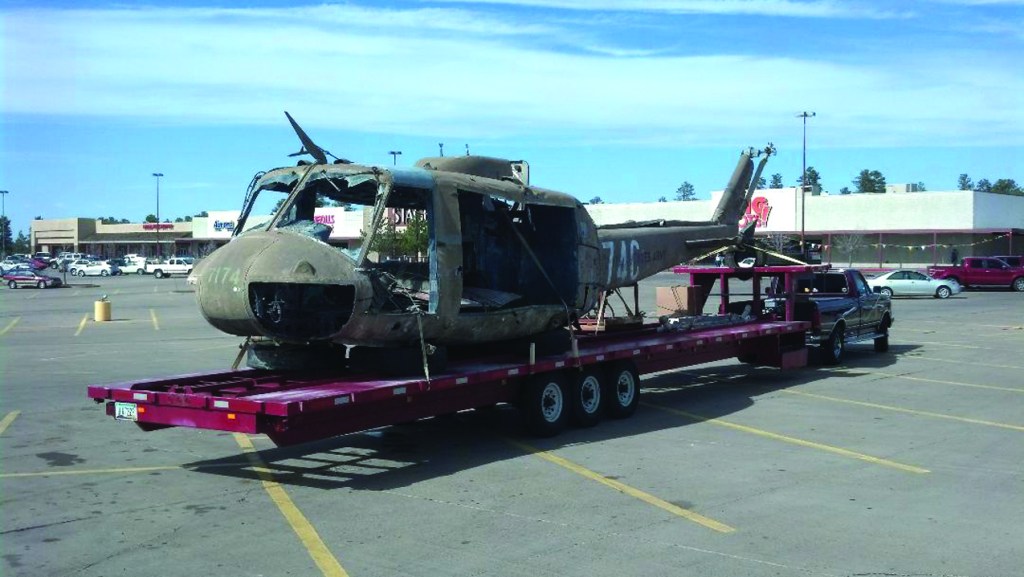 Upon locating the downed Medevac unit, another obstacle — the dense vegetation — presented itself. Unable to land, Henderson directed his pilot to hover just above the bamboo while he went out on the helicopter skid and, with a crewmate holding him by the belt, was able to pull Adams, McNees and Tutrani into his helicopter, all the while receiving small arms fire from nearby enemy troops.

Tutrani, who was significantly taller than his crewmates, first boosted Adams and McNees to safety as Henderson could not reach down far enough to help the others up. Then, while he was reaching up to get aboard, Tutrani was shot through the hand. Despite the wound, however, he was able to lock onto Henderson’s grasp and crawl into the C&C airship, which then transported them to safety. 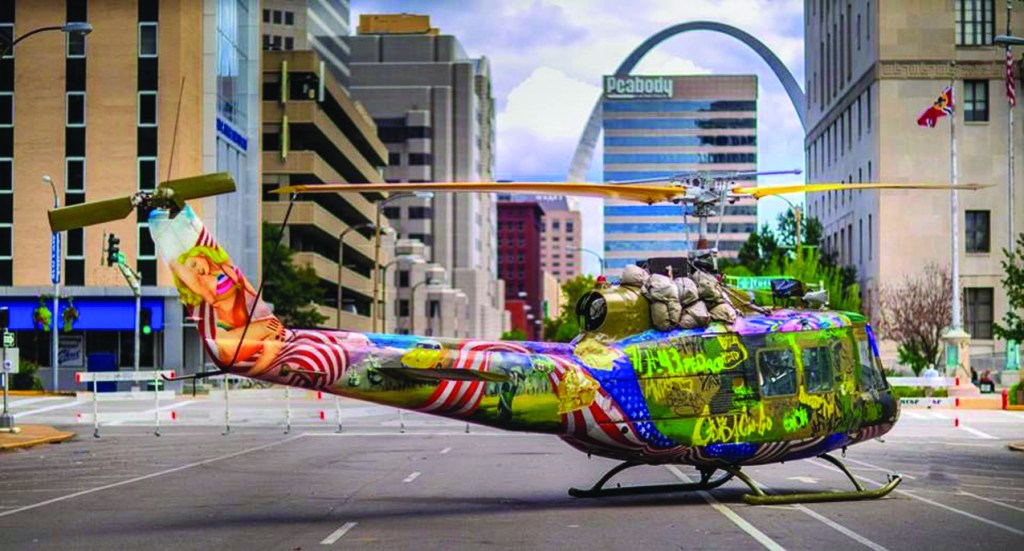 An artist said the depictions on the helicopter are to represent what the soldiers were thinking of back home while in Vietnam.

Barron, who serves as director of Light Horse Legacy, a nonprofit in Glendale, Arizona, which encourages the treatment and healing of Post-Traumatic Stress Disorders suffered by U.S. combat veterans, was not in Vietnam in 1969. But, while serving as a crew chief and mechanic in Korea from 1972 to 1979, he heard numerous stories of such heroism as well as witnessing the physical, emotional and mental trauma the war inflicted on those who fought it. Among the stories he heard during that time was that of Medevac 12.

In 2014, Barron was searching for an old Vietnam-era helicopter to restore as part of his organization’s mission to assist PTSD-stricken veterans.

“It (seeing and touring the restored helicopter) will help encourage the veterans to talk about their experiences,” he said.

In his search, Barron made a discovery in a salvage yard in Show Low, Arizona — or so he thought.
Having recalled the copter’s tail number from the accounts he had heard from the Vietnam vets finishing their tours of duty while stationed in Korea, Barron immediately began researching past military records before determining that the wrecked craft he found in Show Low was indeed the crashed Huey from the 1969 Medevac mission.

Contacting the survivors in addition to the families of those who died on that February day was Barron’s next step. In doing so, he found not only two families dealing with decades-old loss, but three survivors who had battled PTSD just as long.

“The PTSD that McNees, Adams and Tutrani fought for years was made worse, in part, because they thought they had really messed up by flying into an ambush, then ditching the helicopter when they did,” said Barron, who later organized a reunion of McNees, Adams and Tutrani at the Vietnam Veterans Memorial in Washington on the 50th anniversary of their crash and rescue. At that ceremony, the three survivors placed a wreath in memory of Dubach and Schumacher, and also presented a piece of the helicopter door to the surviving sisters of the two.

And on Memorial Day weekend 2021, Barron organized a Zoom meeting to connect the survivors with others who were familiar with the 1969 event. Included in the meeting were Henderson, who was awarded a Bronze Star for his actions at the crash site, and Furr, who had witnessed the initial bombardment of the Huey. It was through this virtual event that some of the crew’s guilt and self-criticism was put to rest.

“What they didn’t realize was that they likely saved the lives of many U.S. and South Vietnamese soldiers when they had drawn fire originally as they came in to evacuate the injured South Korean Marine,” said Barron.

“We didn’t realize just how close they (the enemy soldiers) were to us until they fired on the Medevac helicopter,” he said. “They were ready to ambush our unit, but we didn’t know it until they gave their location away.”

“Learning that, and hearing the whole story seemed to alleviate some of their burden,” said Barron. “It has helped them to see God’s hand in their situation.”