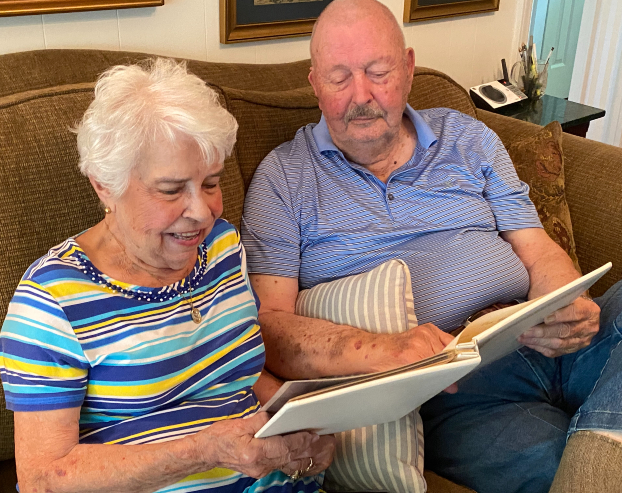 Jewell and Ted Parker look through one of their photo albums.

Ted and Jewell Parker of Oakboro have a love that probably few people in the county can match in terms of longevity. They are approaching their 72nd year of marriage come August, a milestone that is pretty extraordinary to think about. To put that into historical perspective, in the seven decades they’ve been together, there have been 14 presidents.

Aside from merely living in the town, they’ve also been strong pillars of the community. The Parkers have been active members of First Baptist Church of Oakboro, Jewell delivered food to seniors through the Senior Center’s nutrition site and Ted served on the town council in the mid-2000s, even holding the position of mayor pro-tem. The family’s business, Parker Motor Company, has also been a staple in the community for more than 60 years.

With Oakboro being such a small, tight-knit community, most people who have lived in the town long enough have likely crossed paths with the Parkers at some point.

“I don’t think you could find anybody anywhere that knows them that could say a bad word about them,” said Mayor Joyce Little, who’s been good friends with the couple for more than 50 years. She helped organize the Parkers’ 25th, 50th and 70th wedding anniversaries.

“They are just the salt of the earth people,” Little added.

Police Chief T.J. Smith, who has known the Parkers for a long time and attends the same church, said that “being here as long as they have, it just seems like everyone looks up to them,” which makes the couple, in his mind, “Oakboro royalty.”

Ted can still recall the moment he met Jewell.

It was on a Saturday in 1948 and the two were on a blind date organized by some of Ted’s friends. They both lived in different areas of the county — Ted from Oakboro and Jewell from Albemarle.

Some of the details are a little fuzzy but what’s clear is the impact that she left on him from the very beginning. As soon as he laid eyes on her, everything seemed to fall in place for Ted.

“The first time I saw her, I knew I was going to marry her,” he said.

Ted was a teenager and had never dated anyone before he met Jewell, but some things in life just go together.

“She was so beautiful that I told her I had to have her,” he added.

She, likewise, thought he was very handsome.

They dated for about a year before getting married. Occasionally during this time, Ted would pick Jewell up from school in his dark blue 1939 Ford convertible. He said it was a rarity for most kids their age to have their own cars. (His mother, who couldn’t drive, bought the car for Ted when he was 16 after his dad passed way a few years earlier).

“The girls just thought I was something else,” Jewell said, adding that as someone who had his own car, “everybody liked him.”

In the 1950 Oakboro High School yearbook, titled “The Oak,” Ted, who was vice president of his senior class, wrote that his Ford “is my chariot, I shall not walk.”

Getting married and starting a family

In August 1949, a few months after Ted, then 17, secretly proposed to Jewell, who was 18, they eloped and got married at the courthouse in Chesterfield, South Carolina. At the time, the town, which was less than an hour from Stanly, was a popular place for young people in the area to get hitched.

Similar to their proposal, none of their family or friends knew about the marriage until a few days later.

“They didn’t shoot us,” Jewell joked when they relayed the news to their families.

Shortly after getting married, the Parkers moved in with Ted’s mom in Oakboro. After finishing school, he began work at Stanly Knitting Mills, “the best paying job in Stanly County,” he said. Ted worked there for about a year before moving to South Carolina, where he worked at a similar facility. The family stayed there for about seven years, during which time, they had two sons: Norris, born in 1951, and Randy, born in 1954.

Once the knitting mill he was working in closed, Ted and his family came back to Oakboro in 1957 to discover that Stanly Knitting Mills was also closed. He pivoted and decided to follow in his late father’s footsteps. So he opened his own used car shop in the late 1950s.

In order to buy used cars for Parker Motor Company, still at 331 W. 2nd St., Ted did what most people in the used car business did back in the day: he went up North in search of old vehicles. He’d spend two to three days a week traveling to the Philadelphia area, including parts of Delaware and New Jersey, purchasing cars from various body shops.

“That’s the reason we stayed married for 72 years, because he stayed gone all the time,” Jewell joked.

While he was on the road, Jewell took care of the boys, taking them to practices and baseball games.

Coming back home to Oakboro, Ted could haul back around seven cars thanks to the car carrier affixed to his truck. Parker Motor Company regularly bought about 800 cars a year, Ted said.

Ted continued to regularly travel up North until he stopped about five years ago. Even at almost 90, Ted still works each day (his son Randy runs the business), mainly delivering automotive parts to people’s homes across the county. He has no plans to call it quits any time soon.

And the business has garnered a number of customers (both in Stanly and beyond) over the decades who have come to appreciate the service Ted, Randy and the other employees provide.

Looking back on their many decades of marriage, Ted and Jewell credit their unwavering Christian faith and the love of their family and friends in keeping their relationship strong.

They said that despite their arguments, which all couples have, they never thought about divorce.

“I’d kill him maybe,” Jewell joked, “but divorce him? I’m not going to divorce him.”

The Parkers admit they are happiest when around their family, which all live in the region.

They regularly see Randy, who lives only a few miles away, while Norris, who lives in Indian Trail, makes a point to call his parents each night to tell them he loves them.

Throughout the years, Ted has written Jewell several letters expressing his love for her. He shared one, written in 2008, with the SNAP. 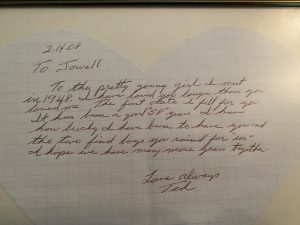 Ted wrote a letter to Jewell in 2008, expressing his love for her and their two sons.

“To the pretty young girl I met in 1948,” he wrote. “I have loved you longer than you loved me. The first date I fell in love with you.”

After writing about how lucky he was to have Jewell and their two sons in his life, he ended the letter with the hope “that we have many more years together.”