The Locust Police, with assistance from the Stanly County Sheriff’s Office, arrested a convicted felon on July 7 after they discovered he discharged firearms that caused damage to neighboring residences.

According to a post on the department’s Facebook page, officers received complaints July 3-4 of gunfire in the Meadowcreek Village and Whispering Hills neighborhoods. Bullets were found in multiple residences, including one that was discovered in the empty bed of a juvenile, according to some of the complaints.

Upon investigation and after gathering statements from several residents, the officers discovered the gunfire came from a residence on Contentment Drive. Once officers learned the person who discharged the firearms was a convicted felon who was not allowed to possess such weapons, they applied for and were issued a search warrant for the residence.

A search of the residence by Locust Police with assistance from investigators from the Sheriff’s Office revealed multiple firearms and other evidence, police said.

Noah Kevin Mathis was taken into custody, transported to Stanly County Jail and booked on the charges of possession of a firearm by a convicted felon and resist, delay and obstructing an officer. 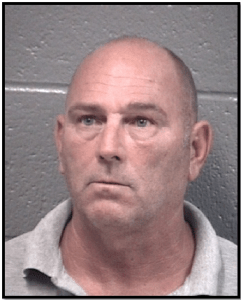 Additional investigation will be conducted, according to police, and any applicable charges related to the damage of nearby residences by firearm ammunition will be pursued.