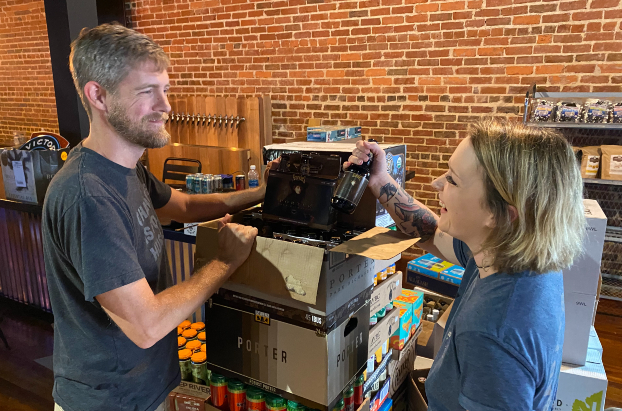 Anyone who has wandered around downtown Albemarle after 5 p.m. realizes there’s not much to see. Most of the area is sparse, with few people around and few businesses open. It’s been a point of frustration for many residents, who want to see a vibrant and exciting nightlife, where they can relax and unwind after a busy day.

Joshua Hicks hopes his new business, Badin Brews, will inject some new life and energy into the area. He’s set to open at 124 S. First St. by July 20, if not sooner. 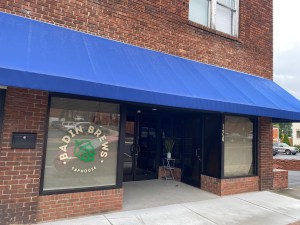 Badin Brews is located on South First Street, right across from Make it Personal.

A native of Denton, Hicks, who grew up visiting Badin Lake with friends, worked an assortment of odd jobs, including in construction and as a massage therapist, before finding his passion working at a bottle-house in Kernersville.

After gaining knowledge and insight about the industry, and wanting the challenge of working for himself, Hicks, 43, decided a few years ago to open his own place.

“I know the business, I know everything that has to happen and I’m just tired of doing all the work and all that money going to someone else,” he said. “I felt if you’ve got the time and the patience, you can do it.”

After eyeing several small cities in the area, he zeroed in on Albemarle, precisely because it lacked the type of place he was wanting to open: somewhere people of all backgrounds could come together to bond over beer and fellowship.

Knowing that Pfeiffer University’s health sciences center had recently opened in downtown, Hicks wanted a location close to the facility, and one that had outdoor space.

“Having an outdoor area makes people feel grounded,” he said.

He worked with Mark Donham, the city’s former economic development director, Joy Almond, Main Street Manager and director of the Albemarle Downtown Development Corporation, and Lee Allen, broker and owner of Re/Max Town and Country, who helped him secure the building a few months ago. He has already received several grants from the ADDC.

“I’m always thrilled to see new faces in our downtown, especially those who bring such a positive energy as Joshua Hicks has,” Almond said in an email. “Not only has Josh put in a tremendous amount of work to breathe new life into a long-vacant space, he also wants to use his business to create a lively atmosphere for the community to enjoy. I look forward to what is sure to be an amazing customer experience at Badin Brews.”

It became evident that people in the community were clamoring for this type of business, Hicks said, once he started an Instagram page about a month ago. Within about a week, the social media account had more than 400 followers. The business also has an active Facebook page.

“Beers are recession-proof,” he said. “People are going to drink in bad times and in good times and it’s something that brings people together. It’s a mood lifter.”

And there’s a strong trust that often forms between regular patrons and the bartenders that get to know them.

“People tell bartenders things that they wouldn’t even tell their closest family members,” Hicks said. “They come in to get it off their chest.”

As for the name of the taphouse? Hicks said he was going through several possible options in his head and Badin Brews was simple and just sounded good.

“I just wanted something that you could remember,” he said.

The 2,400-square-foot brick building, which is painted bright blue and yellow, can seat 35 people, though there will be an outdoor patio, with string lights and corn hole, which will include extra seating. Hicks has a movie projector and wants to host weekly movie nights featuring classics like “Ghostbusters” and “Gremlins.” 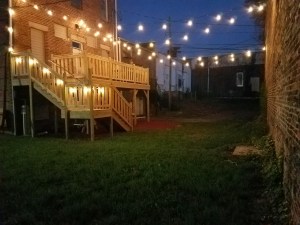 The outdoor area will include picnic tables, corn hole and movie nights each week. Photo courtesy of Joshua Hicks.

There will be 18 beers on tap, featuring ones from Wicked Weed Brewing in Asheville, Catawba Brewing in Charlotte and Deep River Brewing in Clayton, along with six to eight wine options.

“Every style you can think of I’m gonna have,” Hicks said about the beer options. 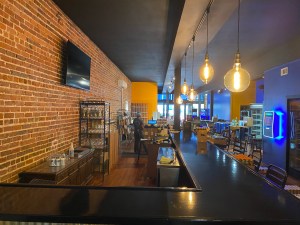 Badin Brews plans to have 18 beers on tap along with a variety of wines.

Hicks has already talked with local food truck operators, who have expressed interest in collaborating. He plans to have several food trucks stationed outside the taphouse five nights a week (he’s even talked about eventually having a food truck festival), along with live music every weekend. Badin Brews will also have a variety of snacks for people to enjoy such as beef jerky, peanuts and popcorn.

The taphouse will not just be geared exclusively for people 21 and older. Families with young kids can enjoy craft soda, a foosball table and pool table, arcade games, and an array of board games. 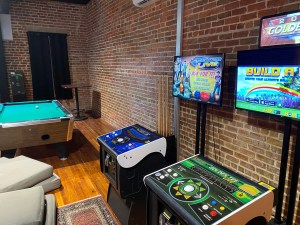 The new taphouse features a pool table, arcade games, board games and a foosball table.

As of now, there are five employees, including Madeline Hana, who runs the social media and is one of the bartenders. She quickly applied for a job after the logo on the window piqued her interest.

Hana, who’s from Albemarle, is looking forward to meeting new people in the community.

“I think it’s going to be a really good place to pick up some new connections and good vibes,” she said, adding she thinks it will be an inclusive “all-are-welcome-type atmosphere.”

Drawing from his many years of working in the industry, Hicks hopes that while the drinks initially draw people into the taphouse, the sense of community will keep them coming back.

“This is a place that they know they can come and bring their friends and family or meet new friends,” he said.

Like the old adage “a rising tide lifts all boats,” Hicks hopes the potential success of Badin Brews can extend to the rest of the downtown and help other businesses.

“I want to be the Pied Piper that leads all the businesses around here to stay open later,” he said. “I’m going to bring the people if they can just rally behind me.”