“This is the gospel in action”: South Albemarle churches work to feed the community 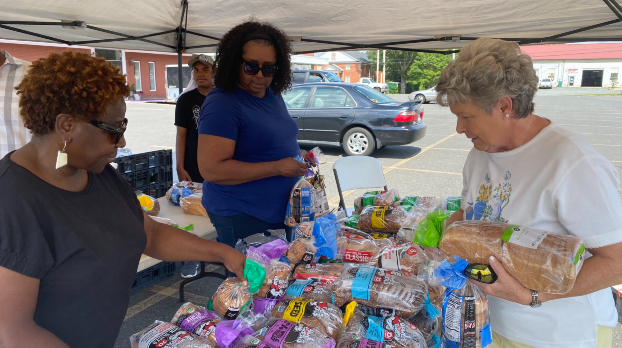 But once COVID-19 hit last spring, and indoor gatherings were prohibited, the alliance had to adapt. In April, SAMA pivoted to providing a different kind of fellowship to not just its congregants, but the larger community as a whole — it started giving out boxes of produce, meats and canned goods to anyone who needed it, which it received thanks to the USDA program Farms to Families. It also began picking up bread each week from Flowers Bakery Outlet in Concord, which was donating some of its supply to nonprofit organizations, as another way to give back to the community.

And the alliance, comprised of about 15 churches of varying denominations which was founded in the late 1980s by pastors James Richardson and Norris Bryant, has continued to feed the community throughout the last year and a half. The bread giveaways occur once a week at Resurrection Community Church on East Main Street, while the food donations tend to happen a few times a month. SAMA has helped all sorts of people, even those who don’t necessarily speak English.

The pandemic has provided an opportunity for churches all across the country to “walk the walk,” so to speak, in “doing the things that we’ve been taught in the Scriptures,” said Gwendolyn Holland, pastor of Sanctuary Christian Outreach Ministry and SAMA chairwoman. “This is the gospel in action.”

With the USDA program having recently stopped its operations, SAMA members have been purchasing food items with the help of donations from community members. The alliance has a food bank in the basement of Resurrection Community Church. SAMA has also hosted a few large-scale outreach events, where food was given out.

“There has been a great need I would say these past 14 to 15 months,” said Michael Stovall, pastor of Resurrection.

Each Friday, food bank manager Fernando Ponds and a few others make the trek to Flowers Bakery to procure the weekly shipment, which is typically at least at least 400 pounds of bread, hotdog and hamburger buns and bagels. On July 16, Ponds picked up $473 worth of food. 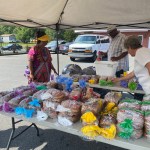 SAMA gives away at least 400 pounds of bread each week. 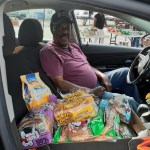 The supply is then taken to a tent in the parking lot of Resurrection Community Church (except during the second Friday of each month, when its taken to The Gathering in downtown Albemarle), where, from around 4 p.m. to 5 p.m., it’s delivered to as many people who need it. Holland’s 14-year-old grandson, Benjamin Carver, gets people’s attention by waving loaves in the air and shouting “free bread” as cars drive by.

“I just believe it’s our mission to do it,” Carver said of feeding people. 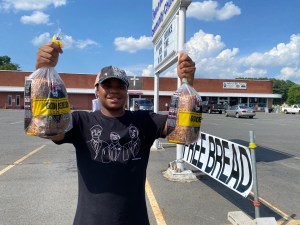 And there are no limits to how much people can take — some have just taken a few loaves for themselves while others have taken more for friends and family.

“We give it until it’s gone,” Holland said, noting that she and other pastors and volunteers encourage folks to take extras for their neighbors.

The alliance donates the remaining items to the Community Table and the Senior Center and a Badin resident picks up a truckload to deliver to seniors in the city.

“I get a blessing from it,” said Albemarle resident Jean Riopelle, who picks up bread once a month to deliver to sick people in the community, “because I get to help so many other people with it.”

Even before the pandemic, several SAMA members said, there was growing food insecurity in certain parts of the county. The efforts by SAMA is a simple way to help alleviate people’s concerns.

By providing reliable access to food, it allows people to focus their finances on other key resources like gas and medicine, Holland said.

These food giveaways have served to show the community that even in the midst of suffering and pain, God is alive and well and is working, through groups like SAMA, to provide for people. It’s also highlighted the importance of churches.

“The church is more than going to a building and singing songs and hearing a sermon.” Holland said, “The work of the church is really administering to the needs of people and so we were just so blessed that God opened up an opportunity for the church to continue to be the church.”

“COVID has done a lot of bad things, but God used it to help us to do something good,” she said, noting the alliance plans to continue feeding the public even after the pandemic abates.

If people would like to contribute to SAMA’s efforts to feed the public, they can donate via Cash App (go to $samafoodbank) or they can send donations to P.O. Box 1451, Albemarle, NC 28002.