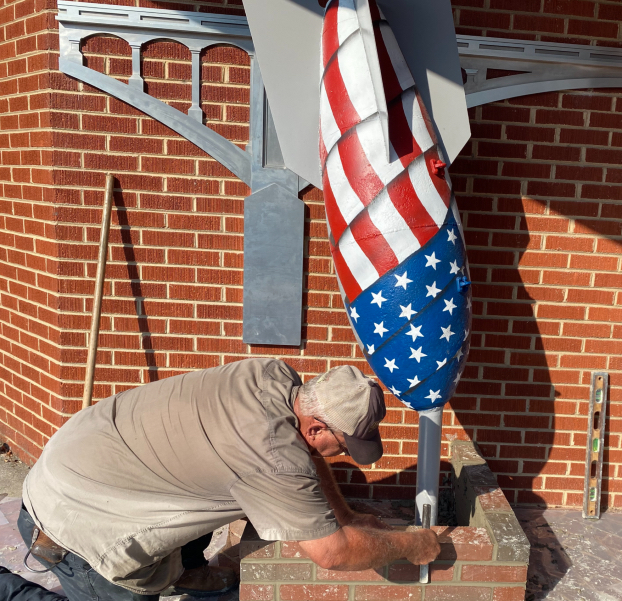 Donnie Cox with Stokes Construction putting the finishing touches on the bomb structure outside of the Stanly County History Center.

If people have been in downtown Albemarle recently, there’s a good chance they’ve seen a rather large, colorful structure located right outside the Stanly County History Center.

The object is a sand-filled bomb, a remnant of the 1927 demolition of the old Swift Island Ferry Bridge, which was destroyed to make way for the creation of Lake Tillery. In what became known as the “Battle of Swift Island Bridge,” the U.S. Army tried many ways to destroy the bridge, including overloading it with weight, bombing it and firing upon it with artillery squads.

The bomb was discovered in November 1991, according to Kent Harkey, president of the Stanly County Historical Society, when Carolina Power and Light lowered the water level to perform maintenance on the Tillery Dam. After inspection from the 18th Ordinary Detachment team from Fort Bragg, the bomb was deemed safe and was returned to Stanly County.

The bomb, which weighs about 200 pounds, was eventually placed in the front lawn of the historic Snuggs House on North Third Street, where it resided for many decades.

Roughly three years ago, the Historical Society was given a partial grant from the Albemarle Downtown Development Corporation for public art. The Historical Society began design plans with local artist Roger Martin centered around the Swift Island bomb and so it was relocated from the Snuggs House yard to Martin’s studio.

The design involves an aluminum, laser-cut facsimile of the Swift Island Bridge along with the actual bomb, the American flag painted on it.

“Roger felt the Swift Island Bridge was a perfect compliment to the bomb since Stanly County was formed from Montgomery County,” Harkey said.

“We came up with a concept of how to take this bomb and put other pieces with it to create an interesting installation,” especially one that would catch people’s attention, he said.

Martin, who works at McKenzie Creative, came up with the initial concept and worked on the project on-and-off for close to a year and a half, along with several of his fellow employees including Keith Whitley (who designed and painted the flag), Logan Childress (who worked on color formulations) and Ty Robitaille (who worked on the digital design and managed the fabrication of the bridge).

“It was a lot of fun,” Martin said about the project.

The dedication for the bomb will be July 29 at 6:45 p.m. in front of the Stanly County History Center followed by an education program at 7 p.m. in the Fellowship Center of Central United Methodist Church. Historian Lewis Bramlett will present the program about America’s Great Bridge Test of 1927 and the history surrounding the bridge’s demolition.

The goal is to “entice people and have them interested in the historical part of the bomb, the bridge and the story between the two…but also to create a photo op that will attract people to the downtown,” Martin said.

The event is free and open to the public, but the Historical Society encourages people to register in advance. Those interested can call the Stanly County History Center at 704-986-3777 to register. They must include their name, telephone number and the number in their party. People can also go online to http://historicstanly.org/ and select the Event Registration tab.