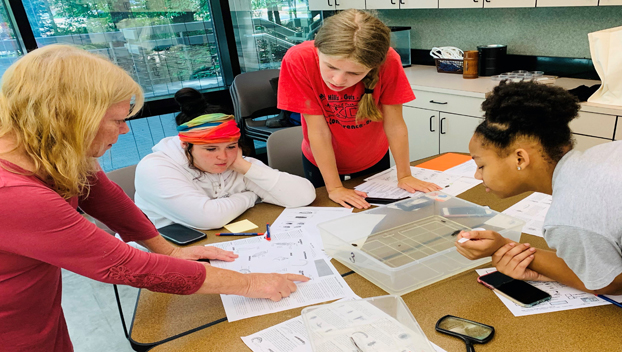 The students waded in vernal pools to scoop up water scorpions and whirligig beetles. They confronted socio-ecological issues in an effort to better understand the ramifications of climate change. They pondered whether technology could save biodiversity.

The Center for the Environment at Catawba College in Salisbury offered one-day Summer Exploration workshops in June and July in lieu of its annual National Environmental Summit for High School Students.

“The pandemic prompted us to offer these workshops, which allowed the high school students to explore topics in small groups, often through hands-on experiences,” Center Director Dr. John Wear said. “We hope to offer the summit next year and may continue the workshops as well.”

In both sessions, Quesada-Embid’s aim was to offer participants critical knowledge on issues of significance.

“I wanted to generate a shared sense of empowerment, and remind them that intentionality in leadership, a steady pulse of understanding on community needs and ecologies, and creative communicative approaches are part of a healthy way forward for a just transition to a more sustainable world,” she says.

Participant Grace Eppiheimer, a rising sophomore at Gray Stone Day School in Misenheimer, wants to pursue a career that allows her to help combat climate change, so she was particularly interested in Quesada-Embid’s workshop. She learned about the interconnected nature of race, class and gender in the context of climate justice.

Quesada-Embid notes that that interconnectedness — the concept of intersectionality — suggests that “the socio-ecological issues that confront us and the cultural identities within us are dually an overlapping lens and tool which provide a clearer understanding of the climate reality and what is needed to remedy it.”

Chloe Redfern, a rising junior from Lexington who wants to pursue a career in environmental engineering, was interested in the intersectional nature of social categorizations. She was fascinated by the examples of local people who are making a difference in their communities.

“You can make a difference without being famous,” she says.

Redfern was especially glad to be with other young people who have a passion for the environment.

“The best part was meeting people who shared my interests,” she says.

In the BioBlitz workshop, participants raced against the clock to identify and record as many wetland organisms as they could in a particular area of the Fred Stanback Jr. Ecological Preserve on the Catawba campus. The aim was to determine if there was a rise or fall in the population of a particular organism.

They studied four groups: mammals, like coyote and river otters; amphibians and reptiles, like spotted and marbled salamanders; fresh water invertebrates, like predaceous diving beetles and dragonfly nymphs; and terrestrial invertebrates, like centipedes and millipedes.

In another of Pope’s workshops, students studied the preserve’s vernal pools, depressions where water is present part of the year. Students examined organisms in three sizes of vernal pools as well as in the moving water of Grant’s Creek.

“Some organisms are highly sensitive to pollution so that can tell us a lot about the health of the ecosystem,” Pope says. “If the water is clean, it will have hellgrammites and dragonfly nymphs. If you find leeches in the water, the quality is poor.”

Riley Crotts, a rising senior at Davie County High School in Mocksville, was especially interested in this workshop.

“These swampy pools hold so much life that you would never be able to tell by just looking at them,” she says.

She wore waders so she could get into the water and find macro-invertebrates.

“Without these vernal pools, the macro-invertebrates would be eaten by larger predator species and would throw off whole ecosystems,” she says. “I was intrigued by how these small pools could make such a big impact.”

Eppiheimer used a net to scoop leaves at the bottom of the pools, uncovering crayfish, stick bugs and dragonfly larvae. She was pleased to learn that scientists are not confined to a lab.

“We collected data to see which pool was cleanest,” she says. “You can learn this by the organisms that inhabit the pool. For example, a Dobson fly larva, which looks like a centipede with claws, cannot tolerate pollution.”

Pope’s urban forestry workshop stressed the need to choose trees wisely when planting or replacing them in an urban setting.

“Some types of trees — like the ginkgo, red maple or tulip poplar — will maximize CO2 sequestration and improve air quality more,” she says.

The workshop “Can Technology Save Biodiversity?” explored the potential for technology to help save biodiversity and prevent an impending extinction crisis, according to the instructor, Dr. Andrew Jacobson, assistant professor of GIS and conservation.

Students discussed “the primary causes of biodiversity loss before diving into emerging technologies, such as drones and satellites, that address drivers of habitat and biodiversity loss,” Jacobson says.

“Bushcraft and Wildlife Techniques” taught by Dr. Luke Dollar, chairman of the Department of Environment and Sustainability and a former Pfeiffer University professor, focused on skills needed in the wild.

Lillian Bodenheimer, a rising senior at North Buncombe High School near Mars Hill, took three of the workshops, including the one on bushcraft. She enjoys nature and the outdoors, so she was interested in learning survival skills like starting a fire with flint and steel and purifying water.

Crotts wanted the challenge of learning how to survive in the woods.

“Now if I were in a situation where I needed to be able to cook my own food or set up my own camp or purify water, I would know how to do it,” she says.

Bodenheimer enjoys hands-on experiences, and that was a hallmark of the workshops she took.

She also was pleased to see that some of the participants were willing to step outside their comfort zone and find that they liked the experiences they were originally hesitant to undertake.

Crotts was delighted that her workshops were outdoors.

“I love being able to spend my time outside doing what I love and working with other people to learn more about our environment,” she says. “Our generation is filled with people who don’t know the importance of taking care of our environment; the summits and these workshops help to teach us how we can do better for the earth.”

The Center for the Environment at Catawba College was founded in 1996 to provide education and outreach centered on prevalent environmental challenges and to foster community-oriented sustainable solutions that can serve as a model for programs throughout the country.