Albemarle planner to attend graduate school at Harvard this fall 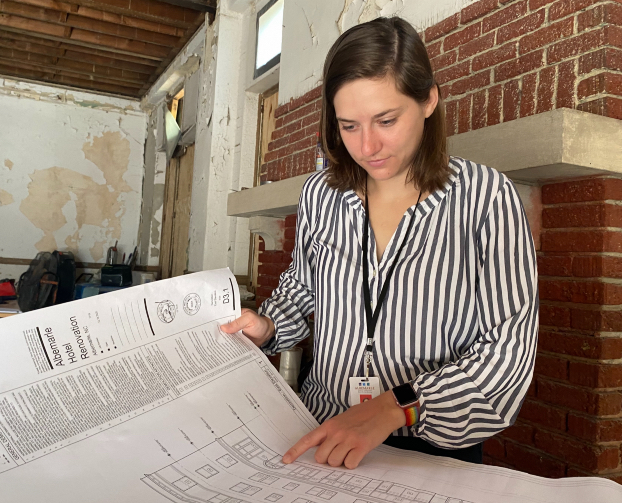 After spending almost three years with the city of Albemarle, Ellie Sheild, who works in the planning department, will soon be leaving to pursue a pretty incredible opportunity.

She will be relocating to Massachusetts to begin work towards her masters degree in urban planning at Harvard University’s Graduate School of Design. Her last day working for the city will be Friday.

The 27-year-old recently discussed with the SNAP not just her time working and living in the city but what the community has meant to her during her tenure.

“I owe a huge debt of gratitude to not just the city as an organization but everybody here who has provided me with not only my own professional growth and experiences but the opportunity to serve other people and to serve this community,” she said. 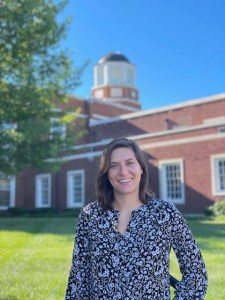 Ellie Sheild, who’s attending graduate school at Harvard University this fall, began her tenure working for the city in summer of 2018. Photo courtesy of Ellie Sheild.

How she came to work in Albemarle

Unlike many who work for the city, Sheild is not a Stanly County native, nor did she know much about the area growing up in Charlotte.

Graduating from UNC Chapel Hill in 2017 with degrees in political science and Spanish, Sheild was inspired to pursue a career in urban planning after taking an elective planning course her senior year.

“Political science is very theory-based and this was a very practical application of all…that I learned about in my political science classes,” she said, noting it was also a way to make a difference in communities.

As she was applying to jobs fresh out of school in the summer of 2018, she happened to drive out to Albemarle to have lunch with one of her college friends who grew up in the city. She knew little about the area, but was impressed by its small-town charm.

“I was thinking to myself what a cool and quaint downtown this was,” she said.

Her curiosity piqued, she got on her phone and checked to see if there were any positions available in the city. She found an opening in Albemarle’s planning department, but the window to apply closed that night.

She quickly printed off her resume and walked into city hall, where she introduced herself to Planning Director Kevin Robinson, telling him she was applying for the job.

“I think he was so taken aback that I had come to meet in-person,” she said.

“It certainly made an impression on me,” Robinson said about their initial encounter. “She clearly very much wanted the job and was putting herself out there to get it and I thought that was a very good sign.”

Sheild began working for the city in August 2018. She was initially hired as a planning specialist but eventually was promoted to senior planner.

Looking back on how she got the job, she emphasized how serendipitous the lunch date with her friend turned out to be.

“It was very fortuitous that this worked out,” she said.

Job as a senior planner

Working in a small city like Albemarle has provided Sheild the opportunity to gain experience in a number of areas related to the planning field. These include meeting with prospective downtown business owners, working with FEMA officials to help rewrite city’s codes for floodplain management and helping overhaul the city’s residential ordinances.

She is responsible for all zoning inspections and also works closely with the county. Much of her day is divided between typical office work (answering phones, sending emails, etc.) and going out into the community to sign off on inspections, attend meetings and speak with people about development possibilities.

She’s also been able to network with many local movers-and-shakers and regularly works with groups such as the Historic Resources Commission and the city’s Planning and Zoning Board. Sheild has also played a prominent role in recent city council meetings, where she presents the logistics of zoning requests to council. 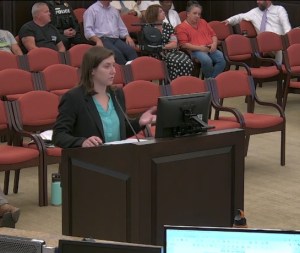 “It’s really fun work and you never really get bored,” she said, noting she likes getting pulled in many different directions. “You just feel like there’s just not enough hours in the day.”

Even though she didn’t have a lot of practical experience in the planning field before joining the department, Robinson has been pleased with her growth.

“I’ve been nothing but impressed with how well she’s handled her role as the senior planner and all the different responsibilities that come with that,” Robinson said.

He noted that with only six months of experience, Sheild passed her floodplain accreditation exam on the first try — something that doesn’t usually happen.

During her free time, Sheild enjoys exploring the many natural wonders the county has to offer, especially the Uwharries.

“That is the gem of this place,” she said.

Some of the notable projects she’s helped with during her time with the city include the opening of Pfeiffer’s new health sciences center in downtown and the ongoing redevelopment of the Albemarle Hotel, which will be turned into rental apartments.

One of her last big projects was the implementation of Chapter 16D, where Sheild worked to align local development ordinances with updated state laws.

“This was the most comprehensive change at the state level for development regulation in the last 60 years, so we had a lot of updating to do,” she said.

A key aspect of her job she has worked to address is making sure that as the the city grows, it does so in an equitable fashion, where all people and communities feel fairly represented. She even centered her graduate school applications around equity-focused planning.

“To me it (equity-focused planning) means that not just the people with the resources are stakeholders,” but all people in the community, she said, noting planning departments have historically been guilty of systemic injustices such as redlining, which continue to have negative wide-ranging effects on minority communities.

She noted for example that marginalized communities are disproportionately impacted by natural hazards because they don’t have access to key resources, such as flood insurance, that many other groups have.

“My job as a planner, and what I hope to get from graduate school, are tools on not just how to redress a lot of those issues but also to shift how we are approaching planning to involve everyone and think towards the future,” Sheild said.

Ever since she took her first planning course at UNC, Sheild knew she wanted to go back to school to further her education.

Beginning late last year, Sheild applied to six schools that had graduate planning programs, including her alma mater and Harvard.

She was hopeful but still realistic about her chances to get admitted into one of the most prestigious universities in the world. Anyone can apply to Harvard, but a tiny portion of those actually get accepted.

But one day in early March, as she was leaving work, Sheild received a call from the director of the Harvard Graduate School of Design saying she had received the Presidential Scholarship. It recognizes people who have not just demonstrated academic excellence, but have a dedication to public service, Sheild said.

When she found out that she was not only going to Harvard, but she also would be receiving a scholarship, “I almost collapsed,” she said.

Joking with her boss Robinson, she told him “on your way home, just look for my collapsed body on the sidewalk from shock.”

The dean of the school later called her and she received a personal email from the president of the university.

Sheild chose Harvard not due to its prestige but because she felt like the university really appreciated her time spent in Albemarle.

“I felt like when I was making my decision, Harvard valued my time in Albemarle and my experiences here more so than any other place,” she said. “It made me feel like I wanted to be at a place that wanted me for what I had done here.”

Robinson, who wrote a reference letter for Sheild, is excited about her future, saying she “excels at everything she puts her mind to.”

“I hate to lose a really good employee,” Robinson added, “but at the same time, I think it looks well on the city and the department that we’ve got people going on to…bigger and better things.”

Her classes, which start Sept. 1, will focus heavily on data and spatial analytics. Sheild said she’s looking forward to “issues that I’m not even aware of, that the world is facing right now, that planning can mold and influence.”

“Education is a privilege,” she noted, “and I now have the responsibility to take what’s been given to me and then use it to better the world and if I don’t do that, then I’m doing myself, others and the university a disservice,” she said.

While she’s excited about her future in the Northeast, Sheild is grateful for the time she’s spent in Albemarle and everything she’s learned.

“Albemarle has been so welcoming and I’ve made really great friends here and the people that I work with are amazing,” she said. “It’s such a supportive and collaborative place.”

“This next step in life,” she added, “is due to what this city has done for me and I’m just honored to have left my small thumbprint.”