Bramlett discusses history behind the Battle of Swift Island Bridge 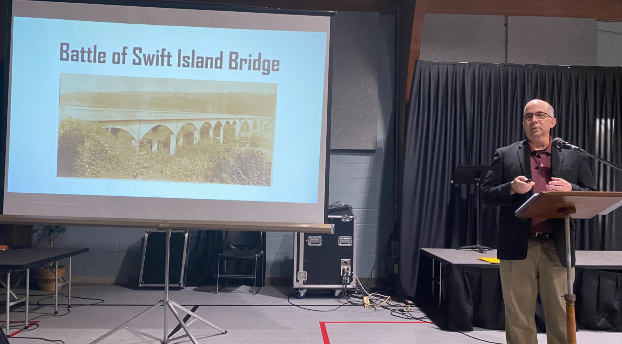 There have been many epic battles in U.S. history, forever etched in American legend: The Battles of Lexington and Concord, The Battle of Gettysburg and the Battle of the Bulge are just a few that come to mind.

But what about the Battle of Swift Island Bridge? It was a most unusual clash — not man against man, but rather man against a giant structure.

That was the subject for the Stanly County Historical Society’s latest event, held Thursday night at Central United Methodist Church. Roughly 100 people were in attendance as county historian Lewis Bramlett regaled the crowd with the colorful history surrounding the destruction of the original Swift Island Bridge in the late 1920s.

With the advent of the automobile in the early 20th century, the first Swift Island bridge, which cost about $200,000, opened to the public in December 1921, Bramlett said, as a means of replacing the ferry service bearing the same name. It was made up of three arches, each about 147 feet across with seven 40-foot deck girder approach spans on both ends. In total, it was 1,068 feet long.

“The bridge was the pride of the highway commission and the envy of every bridge community from one end of the state to the other,” Fred T. Morgan, a reporter with the Stanly News & Press, once wrote, calling it “a feat in engineering and the epitome of suburb workmanship.”

But just a few years later, Carolina Power and Light, which was headquartered in Albemarle, began construction of a hydroelectric plant in Norwood. Once built, it would flood the area around the bridge so the structure had to be replaced with a new one.

Morgan wrote that it “seemed a great waste to destroy such as fine and costly structure,” adding that officials decided to “sacrifice” the bridge “as a steppingstone to progress.”

The bridge’s demolition would be anything but easy and would feature a comedy of errors. Instead of simply demolishing the bridge, the state highway department and the U.S. Bureau of Public Roads seized the opportunity to test its strength.

Enormous wooden tanks were built and filled with water. Each weighed 164 tons, many times the load the bridge was intended to bear. After rolling two across at once and producing only minor cracks in the concrete, engineers turned the bridge over to the U.S. War Department.

It was time for Plan B.

Army airplanes peppered the bridge with 80 bombs loaded with sand.

“The planes were simulated for a war-time scenario because that 6,000 to 8,000 feet would have been what they would have flown in battle,” Bramlett said.

Bombing a bridge with that much firepower might seem like a relatively easy task, but it was anything but. After the bombardment, which lasted a few days, only one bomb accurately hit the bridge and so it was left intact, with only minor damage. Bramlett read where one pilot noted how hard it was — he said he had only a tenth of a second in order to successfully drop the bomb on the bridge.

Another pilot, interviewed by the Greensboro Daily News, commented that “trying to hit that bridge down there below us was just like trying to drop a pea from the top of the Jefferson Standard Building (374 foot building in Greensboro) on a ribbon across the street below.”

An artillery unit then shelled the bridge but, again, though damage was taken, the bridge was still left standing.

Seemingly out of creative options, the military then placed explosives at the base of the bridge and finally, after numerous attempts, the resilient bridge was destroyed. A film crew captured footage of “America’s Great Bridge Test,” including the numerous attempts to demolish the bridge, several clips of which Bramlett played for the audience.

A witness described the destruction of the bridge, Bramlett said, as the “most elaborate peacetime test of war-making machinery ever undertaken by the U.S. Army and the most spectacular show noncombatants had ever witnessed.”

Bramlett mentioned that the military gained valuable insights from the failed exercises, notably the need to find more accurate ways to drop bombs on targets. The bridge bombing helped lead to the development of the Norden bombsight, which played a key role during World War II.

Two of the failed sand bombs were later discovered — the first in May 1955 and the second in 1991. After inspection from the 18th Ordinary Detachment team from Fort Bragg, the second bomb, which weighs about 200 pounds, was deemed safe and returned to Stanly County. The bomb was eventually placed in the front lawn of the historic Snuggs House on North Third Street, where it resided for many decades.

The bomb, now emblazoned with the American flag, is now featured in front of the Stanly County History Center as a public arts display — a tribute to the legendary battle. A short dedication ceremony for the art was held right before Bramlett’s presentation. 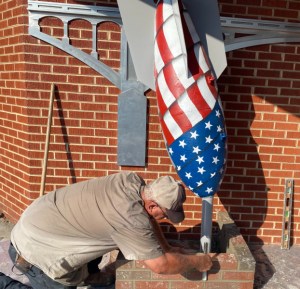 Donnie Cox with Stokes Construction puts the finishing touches on the bomb structure outside of the Stanly County History Center.