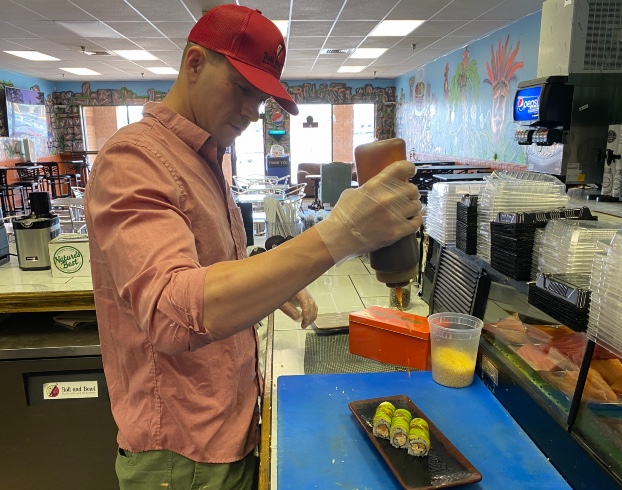 Jacob Karriker makes a sushi roll at Roll and Bowl.

After being open for the past year and a half, a sushi restaurant in Albemarle is planning to expand its operations into the western part of the county.

Besides sushi, the restaurant, which focuses on clean, healthy options, is known for its acai bowls, poke bowls, smoothies and cold-pressed juices. One of its most popular menu items, the Roll and Bowl roll, features spicy crab, cream cheese and avocado topped with a choice of tuna, salmon, yellow tail or crab. Nothing is grilled or fried and everything on the menu is made from scratch.

In addition to their main menu, staff will often improvise and make sushi rolls based off customer suggestions.

“If they go out of town and get a roll somewhere and know what’s in it, we can make it,” said owner Jacob Karriker.

The new creations are then posted onto a chalkboard menu.

The restaurant’s decor is colorful and inviting with a bar in the back and various kinds of seating, including couches, neatly spaced throughout. The walls feature light blue, playful, tropical-themed murals, including a coconut tree, a panda drinking a smoothie, a tiki mask and the restaurant’s mascot, an orange-colored, sushi-making Octopus. 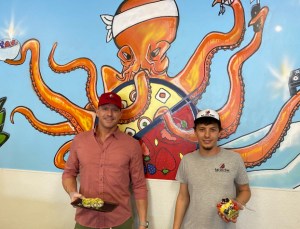 Karriker and the other co-owner Michael Swaringen, who are both from Stanly, met about five years ago working at Little Tokyo. After many years in the restaurant industry, they wanted to open a place for themselves.

Karriker and Swaringen wanted to create a fast-casual yet healthy restaurant environment similar to the vendors they enjoy visiting at the 7th Street Public Market in Charlotte. They especially liked the acai bowls from Rico’s Acai — a food item not easy to find in Stanly.

“It was cool to see the lighter side and lighter footprint of a restaurant,” Karriker said about the vendors at the Public Market.

Though opening during the onset of the pandemic last year wasn’t ideal, Karriker and Swaringen said they have been able to gradually build up their customer base. And being able to stay afloat during the pandemic gave them confidence for the future.

“Being from here, I felt a lot of support from the community, which was super cool,” Karriker said. “It makes you feel good.” 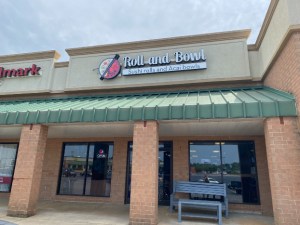 Roll and Bowl first opened in March 2020. It’s next to Planet Fitness in Albemarle.

As the restaurant gained more of a following, the owners said many customers approached them about the prospects of expanding.

“A lot of people were like, ‘Oh, this is really cool. You guys should come to Asheville, you should come to Raleigh, or Southern Pines or Aberdeen’ and I was like, ‘I don’t know, maybe we should,’ ” Karriker said.

They settled on opening a second location in Locust once they discovered the vacant space beside Food Lion. It was a great opportunity for the owners to take advantage of the city’s expected growth in the years to come.

Swaringen said the menu and the general layout of the Locust restaurant will be similar to the one in Albemarle, except the new location will have more of a space theme.

The Albemarle location is open 8 a.m. to 8:00 p.m. Monday through Saturday. Those hours will likely be the same for the new Locust location as well, the owners said.