Pulmonologist suggests for unvaccinated, contracting COVID ‘only a matter of time’

With cases, hospitalizations and deaths on the rise recently in Stanly, the county is experiencing a new surge that’s beginning to resemble the height of the pandemic last winter.

Health officials say the latest acceleration of coronavirus cases is spurred by the highly contagious delta variant — and exacerbated by low vaccination rates.

Stanly has experienced more than a 1,000 percent increase in new cases in the last month, with each successive week worse than the one before. There were an average of 41 new daily cases last week, up from an average of 14 two weeks before.

Pediatric cases of COVID have also been on the rise. The health department has reported 81 such cases since the beginning of July.

Dr. Christopher Poor, a pulmonologist at Atrium Health Stanly, suggests that for the unvaccinated, it’s only “a matter of time” before they get infected.

He said he has interacted with numerous patients who did everything they could to be as safe as possible and still contracted the virus. All it takes is one quick moment for people to let their guard down — a family member visits, a brief interaction with the pizza delivery guy — for the virus to invade and take hold.

“Hopefully it doesn’t hit you hard and you just treat it like the cold and you move on, but you just can’t completely hide” from it, Poor said. 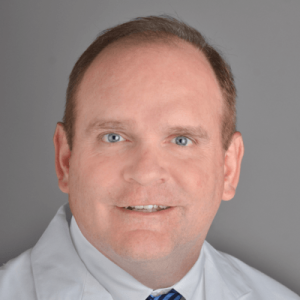 Dr. Christopher Poor has worked at Atrium Health Stanly as a pulmonologist since 2017.

Poor, who’s worked at Atrium Health Stanly since 2017, is seeing more and more new patients each day and expects the numbers to continue to increase in the coming weeks. The vast majority of the people he treats are unvaccinated. He estimates there are probably at least a dozen COVID patients currently at the hospital.

“The past few weeks have been as busy as I’ve been in six months, at least since February, when it was really going strong,” Poor said.

The coronavirus vaccines, like all other types, are not perfect at preventing people from getting sick; there have been reports of breakthrough cases, though they are still relatively rare, with people tending to experience only mild symptoms.

“The COVID vaccines…are there to protect your life, to keep you from dying and ending up in the hospital,” Poor said.

Though he routinely hears reasons why people don’t want to get vaccinated, Poor continues to try and convince his patients to get the shot. And he leads with the science. He tells them that each of the three vaccines — Pfizer, Moderna and Johnson & Johnson — have largely protected patients from serious illness, hospitalization and death. The latest numbers from the New England Journal of Medicine, he said, reveal that the vaccines are about 96 percent effective against the delta variant.

Poor hopes the news that the FDA is aiming to give full approval of the Pfizer vaccine sometime in early September will help convince more people to get the shot.

But in the meantime, the country as a whole is struggling to push back against this current surge. For the first time since February, the United States is averaging more than 100,000 new coronavirus cases a day.

Every few weeks, Poor participates in conference calls with the Centers for Disease Control and Prevention and the Infectious Disease Society of America. The experts have estimated that the current surge could eventually get as bad as it was at the beginning of the year, when cases reached their peak and hospitals across the country were routinely overwhelmed.

“My thinking is it’s not going to get better in a while, it’s going to get worse in the next month,” Poor said.

The current conditions are playing out in a similar way to what occurred in the winter, Poor said. First cases quickly rise, followed by hospitalizations. Patients gradually get sicker and are placed in the ICU, before ultimately, deaths start to appear. After going weeks without any COVID-related deaths, local health officials have reported three within the past week.

“The numbers are not leveling off yet, so that means we’re still going to see it going up until we can start to find that plateau,” he said. “We’re still in for a ride.”

He said morale among his co-workers appears to still be strong, though many are worried about the future and what it will look like.

“I think the unknown is still scary,” he said.

What makes this current surge so much tougher for medical workers compared to the previous iterations is that so many of the hospitalizations and deaths could have been prevented if people took advantage of the vaccines, he said.

“I would not be having these conversations with patient’s family members if they had gotten a vaccine,” Poor said.

And the longer people refuse to get vaccinated, the more time the virus has to mutate into an even more lethal and contagious strain, he said.

“If it changes in such a way that the vaccines don’t work against it, then we’re even in more trouble,” he said.

He encourages those skeptical about the vaccine to discuss their concerns with their doctors as opposed to friends or family, who likely would only reinforce their existing beliefs.

During his 20 years as a pulmonologist, Poor has placed many people suffering from pneumonia on ventilators. But generally, after some antibiotics, they tend to get better and go home. The coronavirus, though, is unlike anything Poor has ever dealt with. Once patients get sick from it, there’s no simple remedy and things can get bad quickly.

But there is a simple solution to prevent people from getting seriously sick in the first place.

“The cure is to get the vaccine,” Poor said.