Stanfield youth reaches for the stars at Space Camp 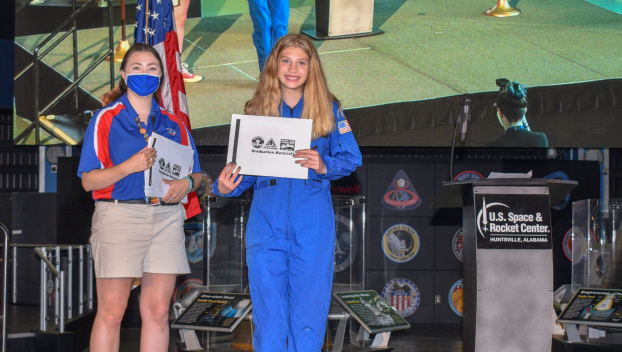 Stanfield resident Lilly McClellan was at Oak Island last summer with her family when she witnessed something she’ll never forget.

Like millions of people across the country, she watched in awe as the first private company, SpaceX, launched astronauts into orbit.

Knowing McClellan’s love for all things science, her parents, following the launch, brought to her attention the idea of Space Camp and it immediately piqued her interest.

“I wanted to go really bad,” she said.

The camp is at the U.S. Space & Rocket Center in Huntsville, Alabama, and uses astronaut training techniques to engage young people in real-world applications of STEM subjects. Almost one million trainees have graduated from a Space Camp program since its inception in 1982, according to a press release.

That night, her family booked a slot for a week in August, which coincided with McClellan’s birthday. Unfortunately, due to the spread of COVID-19, the camp would be more limited than usual and so her family took advantage of a discount and rescheduled for June.

Though she had to wait, McClellan, who’s 11 and goes to Gray Stone Day School, could barely contain her excitement. She read several space-related books and even created a chart on her wall, using an expo marker to count down the days until camp began.

After many months of anxiously waiting, her family made the roughly 8-hour trek to the camp in early June. Once there, McClellan became part of the the crew Dorado — named after a loose concentration of galaxies — which consisted of several other 11-year-olds from across the country.

Throughout the week, McClellan and her team took part in several astronaut training techniques using equipment adapted from NASA’s astronaut program, including the Five Degrees of Separation Simulator, the G-Force Accelerator and the Multi-Axis Trainer, and even experienced a simulated spaceflight mission.

“Everything started weighing way more,” she said about the G-Force Accelerator, comparing it to a ride that spins you around at the local fair, “so you couldn’t even lift your arms up when you started going fast enough.”

While taking part in the Multi-Axis Trainer, campers were asked questions while spinning out of control to test how disoriented they would get. 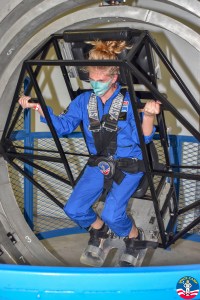 For the simulated mission, McClellan played the role of a mission specialist and, among other things, she was selected to take part in the 1/6th Gravity Chair simulator, which gave her the sensation of what it feels like to walk on the moon. She also worked with her teammates to attach a solar panel to a base on the moon and helped facilitate a successful splashdown back on Earth. 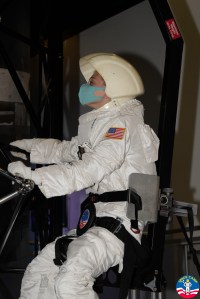 Lilly McClellan in her space suit helps to install a solar panel on the moon. Photo courtesy of Rachel McClellan.

She was given an authentic space flight suit at the beginning of the camp. Since she had no easy place to store it, she simply wore the suit each day.

“I was the only kid that was able to wear it the whole time because it’s so hot,” she said, noting she plans to wear it at home once it gets colder.

During her week at the camp, she bonded with several girls in her group. They all exchanged numbers “and we text each other like all the time now,” she said.

Upon graduation, McClellan got to spend a day at the U.S. Space & Rocket Center with her family.

“That was really neat because she was able to be our own little tour guide,” said her mom Rachel McClellan.

“It was all I could have thought of and more,” she said, noting she’s open to the idea of going back to Space Camp to take part in the Space Academy program, for kids ages 12 to 14. She even took home several “Space Camp” T-shirts, which she’s been wearing virtually every day since camp ended.

McClellan said she is not aware of other kids from Stanly who have gone to Space Camp.

She said she would eventually like to work for NASA as either a rocket scientist, astrophysicist or an astronaut. After experiencing a realistic simulation, McClellan said she would love to walk on the moon one day.

“I felt like when I would go to Space Camp, it would help me make a decision on what I wanted to do, but it kind of just made me more interested in all of them,” she said.

For McClellan, the sky is clearly not the limit.