Sparks made a calculated choice between accounting and Air Force

Shortly after graduating from Pfeiffer College in 1968, Col. Tom Sparks (Ret.) began a long and multifaceted career in the U.S. Air Force.

Over a 29-year period of service, he piloted  KC-135s, aircraft in which “Young Tiger” crews provided air refueling support for planes entering or leaving areas of combat in the Vietnam War. He transported sick and injured military personnel to bases in the Philippines and Japan, flying all over the Pacific in C-9 aeromedical evacuation aircraft. He also worked for many years at the Pentagon, charged with tasks such as drawing up budgets and introducing young officers to what goes on at Air Force headquarters.

Sparks’ military career has its roots in a remarkable tale of serendipity that he fondly recalls: One day, during his final spring semester at Pfeiffer College, he was studying in his dorm for a B.A. degree he’d earn in accounting. A classmate dropped by and asked him for an unusual favor.

An Air Force recruiter they’d hung out with over Cokes and coffee at the Stokes Student Center wanted to give Pfeiffer students an Air Force Officer Qualification Test on campus. However, due to Air Force rules, the recruiter couldn’t administer the test unless a certain number of students signed up to take it. They were one test-taker short. Would Sparks participate?

“I wasn’t interested in joining the Air Force,” Sparks said. “The classmate said, ‘Don’t worry about it. You can come take the test. There’s no commitment.’ ”

Sparks took the test, graduated and began working at a large accounting firm in his native Charlotte. He seemed on his way, earning what was good money for fledgling accountants. He intended to take the CPA exam in September 1968.

As for that Air Force qualification test he took at Pfeiffer, it seemed destined to fade into the usual blur of college memories. These were positive for Sparks. They included singing in the Concert Choir and taking nearly all the photos for The Chimes yearbook. Sparks also learned something about grit: He loaded trucks for a Charlotte-based company on weekend nights; his earnings from that job helped defray the costs of attending Pfeiffer.

Several weeks after Sparks began his accounting work, he received a letter from the Air Force telling him he had qualified for an officer qualification training program in San Antonio, Texas that could make him a pilot.

Sparks was taken aback: “I’d never even been in an airplane. The closest I’d been to one was at Charlotte (N.C.) Douglas International Airport, where there was a place at the end of one of the runways where you could sit and watch planes take off.” 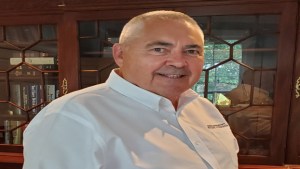 Nevertheless, his initial resistance to joining the Air Force would begin to weaken. He soon came across a newspaper coupon offering prospective students of a local aviation school a flight for $5 in one of their planes; the aim was to interest them in taking flying lessons.

Sparks took that flight and thought, “Well, you know, this is not too bad. It was a great rush, but terrifying at the same time.”

But not too terrifying: “When you’re inside that airplane, you also have this feeling that you’re inside of a cocoon and that nothing will ever happen to you.”

By the time he graduated from Pfeiffer, in May 1968, Sparks’ draft number was low, and he expected to be drafted soon.

“So, a part of my calculations were, ‘You know, Tom, you can fly faster than you can run,’ ” he joked.

He told the Air Force he was in, took some flight lessons and on Sept. 28, 1968 — the day he would have sat for his CPA exam — he boarded a flight for San Antonio. It was the first time he had flown in a large commercial airplane.

In December 1968, he was commissioned a second lieutenant. And one year later, he became an Air Force pilot.

During the years that followed, Sparks would periodically ask himself whether he should leave the service, but several factors always persuaded him to stay the course. The Air Force was “very good” to him, always offering him a carrot in the form of different plum assignments or a promotion.

The pay wasn’t bad either. If, like many Air Force pilots, he had opted to fly for commercial airlines, his beginning pay would be just a fraction of what he was earning in the military.

Sparks now lives in the Washington, D.C. area. He volunteers at entities ranging from President George Washington’s Mount Vernon home to the polls of Fairfax, Virginia, where he has worked as a chief elections officer. He has done administrative work as a volunteer at a COVID vaccination center near his home. He has become a master gardener who teaches people how to grow sustainable gardens.

And, yes, he delights in telling stories about his Air Force days.

Joining that branch of the military “was the best decision I ever made,” he said. “I enjoyed every minute of it. It also means a lot to me when people say, ‘Thank you for your service.’ A career in the military is not for everybody, but service in the military is a good starting place for just about anybody.”