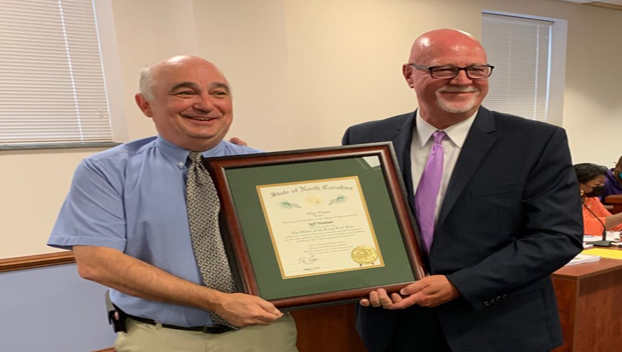 Pryor Gibson, assistant secretary for employment security for the North Carolina Department of Commerce, presents the Order of the Long Leaf Pine to Jeff Waisner. (Contributed)

After 25 years as parks and recreation director, Stanly native Jeff Waisner retired in July and was presented with the Order of the Long Leaf Pine in recognition of his service to the people of Anson County.

Highly active in community endeavors, Waisner volunteered with the Special Olympics as a coordinator from 1997-2014. He has also served on the Boy Scouts Advisory Board, Juvenile Justice Advisory Board and as a Civitan club member. He serves as a trustee, lay leader and Sunday school teacher at his church (Fountain Hill Methodist).

In addition, he has served on the Uwharrie District Lay Speaker Training Board, the Wingate University Hall of Fame selection committee and the Wingate University Bulldog Club Executive Board, as well as having served on the NCSECU Advisory Board for eight years in Anson County, three of which he served as board chairman. A graduate of the UNC School of Government, Waisner also served as an instructor there.

His choice to pursue a career in parks and recreation, however, came after he started out as a business major.

“One of my business instructors told us that careers in parks and recreation would increase in the future,” he said. “I was already working in the summer for Albemarle Parks and Recreation, so that led me to think, ‘why not just continue in that field?’ ”

As a director, Waisner was a proponent of having his staff learning their trade by doing, something he had experienced as part of Chuck Morehead’s summer staff at Albemarle.

“How are you going to teach adults and children to play if you don’t do it yourself?” he asked.

Seeing youngsters who grew up participating in parks and recreation programs succeed in life has been a special joy to Waisner.

“My primary care physician now actually worked for us at Anson for six summers while she was in high school and undergrad,” said Waisner. “And we’ve had numerous young people both here and at Albemarle who’ve learned a lot of life lessons as program participants and employees. Plus, the opportunities that parks and recreation programs provide for all youngsters, regardless of ability, are invaluable.”

Highlights and best memories of his career are many, with his selection as the first coach of the Stanly County Post 76 American Legion team upon its revival in the 1980s being one of the best.

“I was just a kid at the time, and it was a great honor to be selected,” he said.
Waisner was quick to add that he has worked for outstanding people at all his places of employment.

“I’ve had quality supervisors every step of the way,” he said, “and I owe so much to them.”

He also praised Wendell Small, his longtime assistant, who he hired straight out of college.

“Wendell has been a loyal and dedicated co-worker, and will continue to be a great Parks and Recreation professional,” said Waisner.

Retirement plans include a move to Myrtle Beach for Waisner and wife Chris.

“I’ve always loved the beach, and Chris and I made the decision not long ago to relocate to a retirement community there,” he said.

But he has never regretted his decision to make parks and recreation his life’s work.