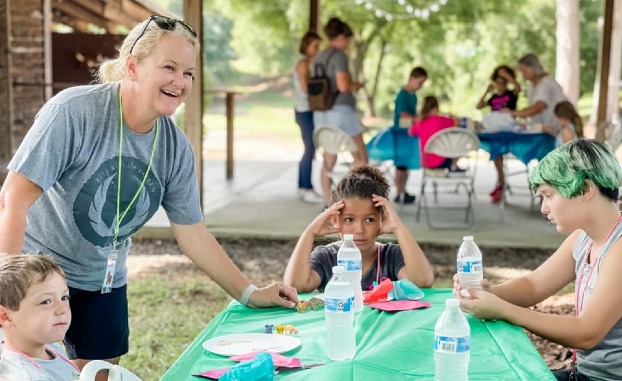 The brainchild of executive director Allison Hudson and director of faith based programming Caitlin McAlhany, the camp was constructed as a place where K-6 students impacted in some way by addiction could come together for fun and fellowship.

The organization typically works with families and adults, but wanted to create an event to reach out to a younger populace.

“It was our hope to just be able to do something for kids that are impacted in some way by addiction, whether it’s directly or indirectly,” McAlhany said, “and just kind of create a space for them to be normal. To have time for them to play and learn.”

Each day represented a certain theme that originated from classic children’s books that were read. The books, which included “Giraffes Can’t Dance,” “The Rainbow Fish,” “The Grouchy Ladybug” and “The Day the Crayons Quit,” helped foster discussions among the kids at the various stations.

After reading “The Day the Crayons Quit,” for example, kids discussed and journaled about reasons why they get upset.

“We had so many good conversations,” McAlhany said.

“It’s been more of a space where they can learn life skills and how to cope with what they’re dealing with,” Hudson said.

Since this was the first time Will’s Place organized a summer camp, organizers didn’t come into it with any set of expectations, but both Hudson and McAlhany were pleased with the participation and the dozen or so volunteers who helped.

The best part about the camp was interacting with and getting to know the kids.

“It’s been amazing to get to be a part of their little lives,” McAlhany said.

“Working with youth is just so hopeful and it kind of gives us an opportunity to teach these kids so we hopefully don’t have to help them as adults,” Hudson said.

Will’s Place is working to create a Forever Young youth group to hold events throughout the year. The group also plans to make the summer camp an annual event. Next year’s camp is slated to run June 20-24 at The Lodge on Hatley Farm.

The camp’s title was a tribute to the organization’s inspiration, Hudson’s brother Will, who died of an accidental drug overdose in 2012.

“That was just a phrase that they used to describe Will all the time,” McAlhany said. Hudson noted her brother also loved the 2009 Jay-Z song “Young Forever.”

The kids also seemed to enjoy the camp.

Nine-year-old Kyle Harris, who is going into the fourth grade at Oakboro Choice STEM School, said her favorite part was making new friends and fishing in the pond.

Ace Hiatt, an 11-year-old going into sixth grade at South Stanly Middle School, said she was initially nervous being around new people. But as she got to know her fellow campers, she grew more comfortable and ultimately enjoyed the experience.