Following an ongoing investigation, the Stanfield Police Department, with assistance from the Stanly County Sheriff’s Office and the Locust Police, executed a search warrant at 8:36 a.m. at 100 Willow St. Lot 604 and discovered 30.6 grams of methamphetamine, 18.4 grams of marijuana, 6.2 grams of cocaine and 1.1 grams of fentanyl.

“It’s certainly a large amount for our agency,” said Stanfield Police Chief Corie Faggart, adding that it’s rare to find so many drugs in one place.

James Wade Bass and Lovanna Wayman Eison, both 34 and Stanfield natives, were arrested and transported to the Stanly County Jail. 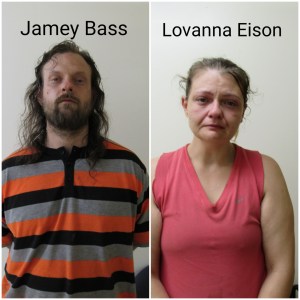 The Stanfield police had been watching the two and gathering information on them for at least the past six months, Faggart said.

Bass, who has prior drug charges and is a convicted sex offender, was charged with trafficking methamphetamine, possession with intent to sell or deliver methamphetamine, marijuana, cocaine and fentanyl, possession of firearm by convicted felon, maintaining a dwelling for the sale of controlled substances and possession drug paraphernalia.