Albemarle Police Department has released the name of a man killed last Wednesday. 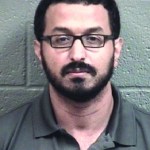 Detectives with the Police Department, with the assistance of the North Carolina State Bureau of Investigation, arrived on the scene to begin the investigation. It was determined Mused had been murdered. Detectives were able to gather further information and issued warrants for the arrest of Ebrahim F. Alshaibi, 31, of Albemarle. The suspect was located a short time later and arrested without incident.

Alshaibi was transported to the Stanly County Jail and received no bond for his release. His first scheduled court date is Aug, 23 at 9 a.m.