“Everybody heard it on the first day of school,” the 1998 Pfeiffer University graduate said from Charlotte, where she runs Sunshine Media Network. “I wasn’t very comfortable with it. Some people took to calling me ‘Sunshine.’ ”

Once Moxley started applying for jobs, and then as an entrepreneur, though, the moniker became more of an asset than a liability. 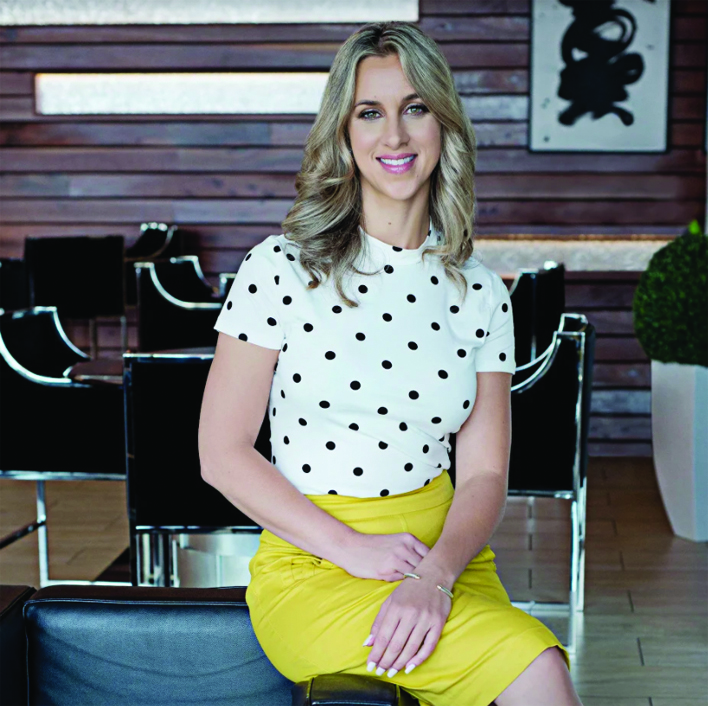 Jennifer Moxley is a former reporter for The Stanly News & Press.

It helped her stand out in the piles of applications that her first prospective employers received. After earning a B.A. degree in Communication Studies at Pfeiffer University, she landed work in print journalism, reporting for The Stanly News and Press and, then, The Salisbury Post. She eventually transitioned to broadcast news, working as a producer (WBTV Charlotte) and as a reporter (News 14 Carolina). Along the way, she took a break between news media jobs to serve as the executive director for United Way of Stanly County for nearly three years.

By 2012, Moxley was going the freelance route, having seen the media favor hiring cheaper and younger talent. She began working in independent live TV and video production for corporate, commercial or social media use. She was also becoming quite entrepreneurial. The symbolism and connotations of “sunshine” would help her promote two ventures she started in 2012: Sunshine Documentary Films and Sunshine Media Network.

Sunshine Documentary Films, which reflects Moxley’s greatest creative passion, is still in its development phase. Once she lines up adequate financing, it will shed light on important stories that generally aren’t covered in the mainstream media or are hidden from their view. Conceptually, of course, this is akin to “sunshine laws” or the antithesis of “Democracy Dies in Darkness,” which is how The Washington Post describes life without a vigorous press.

At Sunshine Media Network, described as a one-stop resource, Moxley is a story maker, using a variety of media to tell the narratives of clients, manage their brands and teach them how media fuels bottom-line growth. She also provides training on crisis communications, leads video campaigns and offers advice on how to enhance a client’s on-camera presence.

One of Moxley’s major aims at Sunshine Media is to transform perceptions of the news media; she stresses to clients that instead of fearing it as potential victims, they can use it to advance their objectives.

“Because I have firsthand experience inside the media, I am able to communicate that to people on the outside, and that is a huge benefit,” Moxley said.

Moxley’s business has been busy of late. She has assembled teams to work on numerous projects, for such clients as the U.S. Department of State, the late Maya Angelou, Duke Energy, UnitedHealthcare Pro Cycling, American Express, Morrison Healthcare, Compass Food Group and Marriott. Vicinity Capital engaged her to produce a video pushing for greater investment in the revitalization of downtown Albemarle. Pfeiffer University’s Center for Health Sciences, which is featured in the video, has contributed to that effort.

Beyond the creative work, Sunshine Media Network works to elevate women and minorities. It uses the brightly colored visuals associated with sunshine to underscore certain emotions and values that Moxley holds dear and wants to affirm, both in image and in deed.

“It’s very bright,” she said of the look of her company’s offices. “It’s very colorful. It’s very optimistic. It’s very positive. It’s warm. It’s full of energy. And I hope that those are all things I bring, not just to my clients’ projects, but also to the people I work with and the people who work alongside me, because this industry can be one that is not inclusive of a lot of people. It can be one that is hard on women.”

Moxley knows something about how hard life can be for women. By the time she graduated from Pfeiffer at age 20, becoming the first member of her family to earn a college degree, she had given birth to two children and had worked to make ends meet during her studies. She has been a single mom for several years during her post-graduation life.

Moxley allows that being fully present for her children when it mattered most has been a challenge. For her, entrepreneurship has been the best way to find a proper work-life balance.

“When I became a business owner, I had so much more freedom to be a mom,” Moxley said. “And that was worth every single risk I took. I was able to call the shots. I was able to turn down jobs if it interfered with basketball or music or, you know, Halloween or Christmas. I wish I had become an entrepreneur sooner.”

She insists that her employees take a similar approach to work and life.

“If you’re stressed out, if you’re having an emotionally hard day, don’t come to work,” she tells them. “Take care of you. If you have a family obligation, that comes first.”

This way of managing employees ensures that they “want the business to be successful” and that they’ll be there “for the critical moments that matter so we can be successful.”

Having found success in life and business, Moxley is now in pay-it-forward mode, as a social entrepreneur. She uses a portion of her earnings to offset pro bono or lower-price network services that help female or minority entrepreneurs and experts gain a bigger presence in the greater media conversation. She helps them develop their stories, pitch them to the media and enhance their interview skills.

Ken Keuffel, who authored this article, has served as Pfeiffer’s assistant director of communications since December 2019. He welcomes story ideas from Pfeiffer’s faculty, staff, students, alumni and friends. The form for submitting story ideas is at www.pfeiffer.edu/newsform.​