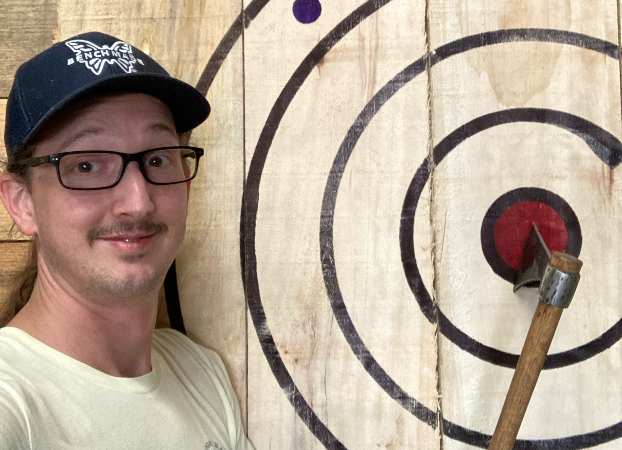 For more than a decade, Garrett Starnes has enjoyed a fairly unique passion: he likes “throwing sharp pointy objects,” as he puts it. This includes everything from kitchen knives to saw blades to roofing hatchets. But around eight years ago, he and his brother Mitchell discovered a new throwing tool: tomahawks.

“We just determined that that was the ultimate throwing weapon,” said Starnes, 37, who lives in downtown Albemarle and has a target in his backyard.

Over the years, Starnes introduced tomahawk throwing to several of his friends, who all enjoyed it. This got him thinking about the realistic possibility of translating his passion into an actual business.

Axe throwing is the latest competitive trend popping up in various venues all across the country. Charlotte already has several of them.

“I can’t explain the gratification that comes from that satisfying ‘thud’ when it just sticks,” he said. “There’s something about it that just makes you smile.” 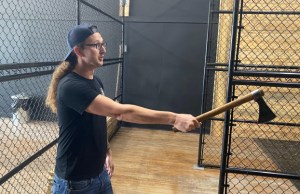 Starnes wants to bring that same gratification to the people of Stanly. He’s set to open his business in downtown Albemarle in the coming weeks.

The Tomahawk Throwing Range & Blade Shop, which will be at 130 S. Second St., will feature 10 throwing lanes, with chain link fencing in between each for added protection. There will also be protective fencing behind each of the lanes.

“I want my customers to be safe and I want them to feel safe,” Starnes said.

And the city is excited to welcome his new business.

“The Tomahawk Throwing Range makes for an exciting addition to downtown Albemarle by providing a unique activity that complements our bountiful recreational experiences in Stanly County and the Uwharries,” said Joy Almond, Main Street Manager and director of the Albemarle Downtown Development Corporation. 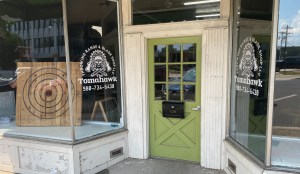 The throwing range is on South Second Street across from the courthouse.

What will differentiate Starnes’ throwing range from others in the region is that to the best of his knowledge, his will be the only one featuring tomahawks as opposed to regular hatchets. While hatchets are mainly designed for splitting kindling, tomahawks have always been a weapon.

“They’re designed for throwing,” he said, noting they are also lighter and easier to handle than hatchets. People will be able to choose their own tomahawks, which are made in Ohio. Starnes will also sell them.

A thrower typically stands about 12 feet back before making a toss. Starnes encourages people to throw in a straight motion with their strong foot back. While people can throw with two hands, he finds it more accurate to throw one-handed.

The wooden targets are similar to those found on a typical dartboard except they has five concentric circles, including the red bullseye.

In a typical axe-throwing match, which consists of 10 throws, the bullseye is worth six points, followed by the other circles being worth four, three, two and one points, respectively. There are also two tiny blue circles in the upper right and left corners that, if hit on the fifth and tenth throws, are worth eight points. 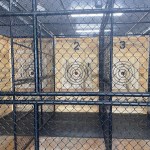 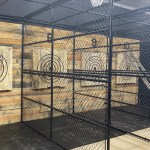 Starnes hopes to eventually establish a tomahawk-throwing league, where teams can play competitively against each other.

Due to the fact that people will be throwing a dangerous weapon, safety is paramount. People will have to fill out liability waivers and listen to a brief safety talk before being given one-on-one instructions regarding how to properly throw the tomahawks.

Many of the rules seem obvious — never walk in front of someone throwing, don’t try to catch a falling axe, always be aware of your surroundings — but when dealing with a situation where an accident could result in serious injury, “they need to be verbalized,” he said.

Even though the range has not opened yet, it has already received plenty of attention from curious people walking by.

“Every day that I’m down here working, people pop in and want to come in and see the place,” he said. “The community seems legitimately excited about this.”

Starnes, who has lived in the city for about four years, wanted to open in downtown because he wanted to help revitalize what for the longest time has been thought of as a ghost town after 5 p.m.

“We looked around and I saw this as kind of a good niche to start something for entertainment that people would be into,” he said.

He had previously spent more than a decade in the medical field, repairing MRI machines at local hospitals. He stopped about two years ago to spend more time with his family.

By running his throwing range, he can make a living while still finding time for his wife and three kids.

Starnes envisions his throwing range becoming a social hub for people to get together and have a good time. He will also be selling cans of beer, but he encourages people to be smart about how much they consume in relation to throwing the tomahawks. He’s even thought about eventually incorporating knife throwing.

As of now, people will pay $25 to rent a lane for an hour though Starnes is looking into allowing 30-minute rentals. Groups can also throw together, though only one person is allowed inside the lane at one time.