With strong faith and belief, Oakboro fire chief is recovering from COVID, diagnosis of rare disorder

Rodney Eury, left of center, is surrounded in the hospital by his wife Lorie, daughter Macie and son Dalton. Eury has been battling COVID-19 and Gillian-Barre Syndrome. (Contributed)

Oakboro Fire Chief Rodney Eury has always been someone who likes to be on the move.

Aside from his responsibilities as chief, which keep him busy enough as it is, Eury enjoys traveling to fishing and volleyball tournaments to support his two high school age children, Dalton and Macie. He also regularly travels to Charlotte, where he’s been employed with the Charlotte Fire Department for more than 20 years.

“I’ve always been about as active as you can be,” said Eury, 51, who’s been with Oakboro Fire for about 30 years, including the last 11 as chief.

This is why the last two months, during which he’s dealt with numerous health issues including testing positive for COVID-19 and being diagnosed with a rare neurological disorder, have been so difficult and strange for Eury. Though he is now at home recovering, the ordeal has also been difficult for his family.

“It was scary for us all,” said Lorie, his wife. “We are thankful to God and the medical staff that watched over him and took care of him.”

“It’s never easy to watch your loved one go through something like this,” she added.

Rodney Eury said that even while he struggled, he never lost hope. He was at peace with the fact that he would eventually recover.

“I was never scared,” he said. “I was pretty confident that I’m going to beat this. This is not going to keep me down.”

It all started around July 5, when Eury began coughing and feeling lethargic and congested. Whatever he ate or drank constantly tasted salty, which confused him. Lorie had some trouble breathing and lost her sense of smell for a few days.

“It was like a really bad flu,” he said, noting the constant exhaustion was nothing he had ever experienced before.

They eventually went to a clinic in Albemarle where Eury and his wife, who were both unvaccinated, tested positive for COVID-19.

The coughing and congestion gradually got better, which Eury took as a sign that he was improving.

“I took it as a way I felt and with the symptoms going away, that I was on my way to recovering,” he said.

About two and a half weeks later, Eury began experiencing a tingling pain that began in his shoulders and progressed to other parts of his body, including his neck, arms and legs. He noticed that his arms and legs were notably smaller, a sign that he had been losing muscle. He was also having trouble with simple exercises, such as walking up stairs.

Eury called the doctor’s office in Oakboro and described his symptoms. Concerned that he might be suffering from a stroke, a nurse told him he needed to go to the ER. He thought she was overreacting.

He went to Novant Health Mint Hill Medical Center on July 23, where he spent about nine hours in the ER. Several tests were conducted and blood work was completed, but, even as Eury mentioned the left side of his face was getting numb, the doctor couldn’t find anything wrong other than a possible sinus infection. He went home.

Eury progressively got worse the next day, as he started to have severe back pain. He took some medication, but the pain wouldn’t go away. It eventually became so intolerable that he decided to go to the hospital.

Wincing in pain as he struggled to walk, he made it to his truck early in the morning and drove to Novant Health Presbyterian Medical Center in Charlotte. After struggling with simple tests assessing his reflexes, a neurologist diagnosed Eury with Guillain-Barre syndrome, a rare disorder in which the body’s immune system attacks its nerves.

Eury was told that his disorder was directly linked to him contracting COVID-19. The antibodies he gained recovering from COVID were still in “fight mode,” he was told, and so they began attacking his nerves.

“COVID triggered this stuff to happen, the Guillain-Barre,” Eury said.

While the exact cause of Guillain-Barre syndrome is unknown, Eury said, he learned most patients typically report symptoms of some kind of infection in the weeks preceding being diagnosed.

Each year in the United States, around 3,000 to 6,000 people develop GBS, according to the Cleveland Clinic, typically triggered by a viral or bacterial infection, including the flu or COVID-19.

For the next several days, Eury, who could no longer walk and struggled to talk, was placed on a special treatment called intravenous immunoglobulin therapy. IVIG is a treatment made from donated blood that contains healthy antibodies. These were given to help stop the harmful antibodies from damaging Eury’s nerves.

Much of his numbness began to disappear, though he had some residual tingling in his toes and his finger tips and legs were still weak.

During the past few weeks, Lorie has documented his journey on the site CaringBridge to help keep people informed.

“He is a goer and doer,” she wrote on Aug. 10. “Working hard is all he knows. He is determined and has the will and grit to do what he has to do to get back on that big red truck and to keeping Oakboro straight.”

After spending 17 days at Novant, Eury was transferred to Carolina Rehabilitation in Concord on Aug. 10 for physical and occupational therapy.

He had multiple physical therapy and occupational therapy sessions, up to three hours a day for the next two weeks to slowly help him regain his strength and ability to walk. At times the sessions were difficult, but Eury pushed himself as much as he could.

“I told them when I went in, I said, ‘I can’t promise you but one thing: that I’ll give you everything I got and I’ll go until I can’t,’ ” he said, noting that there were a few days where Eury was pushed to his limits.

Much of the therapy sessions focused on improving the strength in Eury’s legs. He was required to perform balance tests of walking up and down a ramp. Eury was timed on his ability to stand up and walk around a cone using his walker with wheels before sitting back down.

Each day, Eury said, he could feel himself getting stronger. He was eventually able to walk independently, without the need of a walker, which was one of the personal goals he set for himself.

During one exercise, Eury had to walk as far as he could in six minutes. On his first attempt, he walked 950 feet with the aide of his walker. A few days before he left rehab, Eury repeated the exercise, this time walking 1,050 feet. 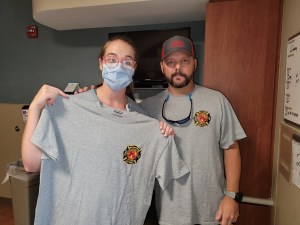 After about two weeks in rehab, Eury came home to Oakboro on Monday.

“God has been so good to us through this,” Lorie wrote about her husband coming home. “He has his hand upon Rodney, gave us peace and sent many blessings our way.”

While he’s still not fully recovered — still having some tingling in his right leg and toes whenever he stands, he has gone on several short walks around the fire department.

Eury at the moment doesn’t plan on getting vaccinated, though he will talk about the subject when he goes back to see his neurologist.

“I’ll have to ask him more questions about that,” he said.

Supported by the community

Throughout the past several weeks, Eury has been bolstered by his strong Christian faith and the support of his family and friends. He has posted several updates on his Facebook page along with Lorie’s posts on CaringBridge.

“When I started to see all the comments that people were making (on social media) that was really overwhelming,” Eury said. “I told my wife, ‘Heck, I didn’t even know I knew that many people.'”

The second annual Brotherhood Strong Ride benefit will be Sept. 25 at the Oakboro Fire Department, with proceeds going to Eury along with Stanly County Burned Children’s Fund and the NC Chapter 24 of the Red Knights Motorcycle Club. Registration is at 9 a.m., with the one hour ride beginning at 11 a.m.

Eury plans to return to the department in mid-September, where he will be on light duty. He hopes to be back working full-time by the end of October.

One of the moments that will remain with Eury forever occurred Monday as he was heading home from rehab. As he was driving past Red Cross on N.C. Highway 24-27, he noticed the Oakboro Fire Department fleet, including two fire engines and tanker truck, were waiting on the side of the road to escort him back to the fire station.

“It felt pretty good that they thought enough about me that they wanted to do that,” Eury said. 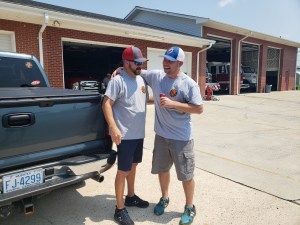 Rodney Eury is shown with Oakboro fire captain Patrick Stone. Members of the fire department surprised Eury and escorted him back to the station Monday after he left rehab. Photo courtesy of Rodney Eury.