Forte: Racing ‘makes you feel more alive than anything else’ 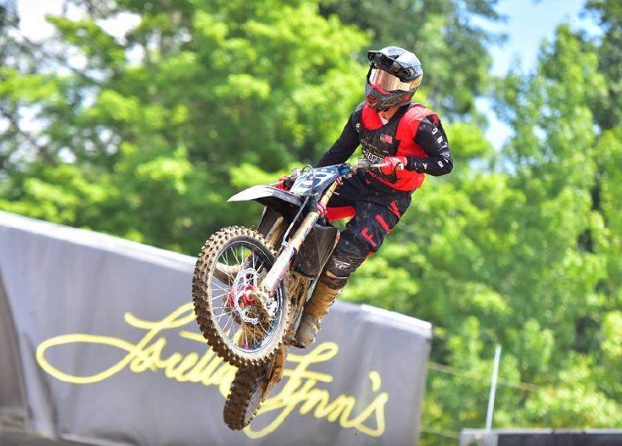 Richfield native Aleck Forte was spending the night at his friend’s house about 20 years ago when he was first introduced to dirt bikes.

After he discovered his friend’s 80cc bike and went for his initial ride, Forte discovered what turned out to be a life-long passion. He later saved money working for his father’s roofing business during the summer and was able to purchase his own used dirt bike.

“I fell in love with it, the feeling of it,” he said, noting the rush of riding the bike “makes you feel more alive than anything else.”

That feeling has never went away. If anything, it has only intensified over the years, as Forte, a 2008 North Stanly graduate, continues to ride as much as he can.

He started competing in motocross races and began making a name for himself. Around 2013, Forte earned his professional license and competed against other racers that were sponsored by big-name companies like Monster Energy and Red Bull.

His professional career didn’t last long, though, as Forte got burnt out traveling and paying for expenses. Unlike other high-profile racers, Forte didn’t have the requisite funding to continue competing on the professional circuit.

“All odds are against you when you’re doing it from your own budget,” said Forte.

He also has other obligations to attend to as he took over the family business, Forte Roofing and Remodeling, in 2017.

He took a break from racing for several years to start a family with his wife Brittany (they’ve got two kids, 4-year-old Noah and 1-year-old Olivia). But towards the end of 2019, his family and friends encouraged him start competing again.

But the main person who inspired Forte to get back on the bike was Noah.

Forte said seeing his son’s face “light up” when he gets ready to race, “there’s no feeling that can compare to that.” 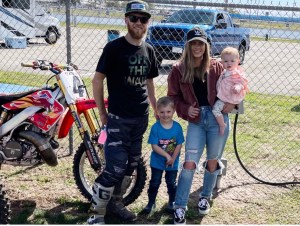 Competing in ‘the Olympics’ of motocross racing

While a few people know about his racing career in Stanly, Forte is much more of a known commodity in the motocross community. Having competed and won numerous events across the country over his career, Forte said he has created a name for himself.

“When I show up, people are definitely intimidated and they know who I am because I’ve been at it for 20 years,” he said.

Where he used to compete on the professional circuit, now that he owns the family’s roofing company, which takes up much of his time, racing is more of a hobby. Forte, 31, refers to himself as a “veteran expert rider.”

In March of this year, Forte competed in the Ricky Carmichael Amateur Supercross, where he placed ninth overall in the Veteran (30 and up) class. He raced against more than 30 the drivers from across the country.

Just a few weeks ago, Forte competed for the sixth time in the Monster Energy AMA Amateur National Motocross Championship, held each year since 1982 at the home of country singer Loretta Lynn in Hurricane Mills, Tennessee. It used to be called Loretta Lynn’s Amateur Championship.

The race, which Forte calls “the Olympics of motocross,” is the world’s largest amateur motocross race. It is the final stop for many amateurs before they join the professional ranks.

But before he could make it back to Championship, he had to qualify for it at area and regional races. In anticipation for his hopeful journey to Tennessee, he began racing his Honda 450 on practice tracks at least three days a week, usually on the weekends, starting in March.

The Northeast area qualifier was held in April in Danville, Virginia. It was a two-race format, where the winner would have the lowest average finish from both races. Competing against about 25 other bikers, Forte won both motos to advance to the Northeast regional in Hedgesville, West Virginia, which involved three races. Though he did not win the regional (there were 57 racers), he was still able to safely qualify for the Championship.

“It’s crazy how much racing I had to do to get there (Lynn’s ranch),” he said.

For the Championship, which involved numerous classes featuring various age groups and bikes, Forte competed in three races against 42 other veterans in the 30 and older group. Many of the competitors, like Forte, were retired professional racers. Each moto race featured 10 two-minute laps.

Forte actually finished in fifth place during the first race — his best moto score ever at the Championships. He credited his strong position to getting off to a quick start.

His next two races were not quite as strong — he finished 15th and 22nd — but thanks to his quality first moto score, Forte placed 12th overall, his highest finish ever. His previous best, he recalled, was 25th.

Forte raced against two others from North Carolina, including his good friend William Hall from Union Mills, who placed 10th.

The top-12 finish was ultimately a pleasant surprise to Forte, who had crashed twice in the last race.

“I pretty much thought it was out of the question to be anywhere close to the top 10,” he said.

On the heels of his best performance, Forte is aiming for an even better result next year. With enough practice in the coming year, he is optimistic he can break into the top three.

His next big event is Thor Mini-O’s, which will be in Florida this November.

Forte plans to keep racing as long as he can. And he has good reason to continue: His son Noah also enjoys riding and has told his father he plans to race when he’s older.