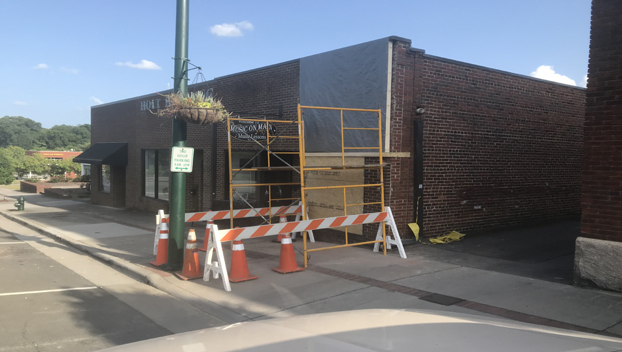 A truck damaged the outside of the building housing Music on Main in downtown Albemarle. (Photo by TOBY THORPE)

An accident at approximately 12:45 p.m. Wednesday resulted in extensive property damage to a building at 126 E. Main St., Albemarle.

The building, owned by Jodie Hembree and Sheu Li-Chi of Fairfield, California, is occupied by Music on Main, a local music instructional facility.

Albemarle Police Department reports indicate a truck, owned by A.L. Lowder, Inc. of Albemarle, and operated by Kevin Nowicki, 46, of Albemarle, was switching out a debris container as construction work was going on in the area. According to the report, the truck made contact with the building, resulting in the brick veneer/facade being pulled loose from the structure.

The police report listed an estimate of approximately $10,000 damage to the building. No damage was reported to the truck or the debris container.

According to Paige Emerson of A.L. Lowder, Inc., no injuries occurred in the accident.

Emerson also noted that the parties involved are working to expedite the repair, and that an insurance claim is being processed so that the property damages may be remediated as promptly as possible.