Following his passion, Smith celebrates a year of feeding the community 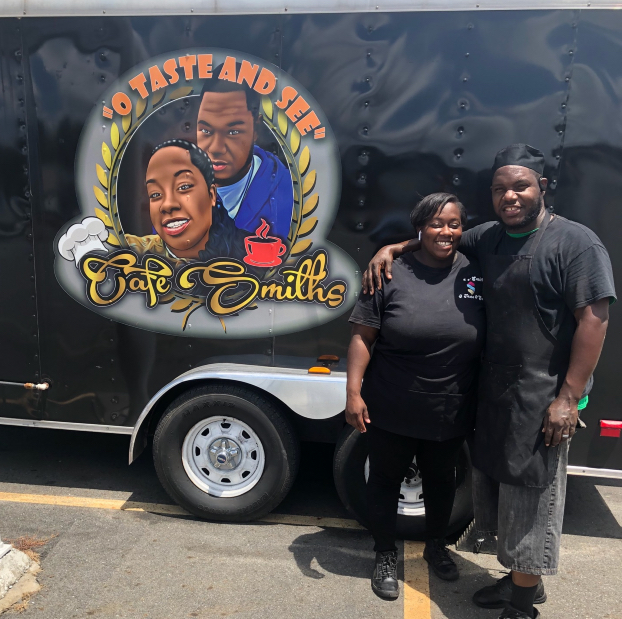 After spending his career working for others, Joshua Smith took a chance on himself and opened his own food truck business last summer.

It was a gamble, not just because he had never run his own business before but because he was opening during a period of such uncertainty in the COVID-19 pandemic.

But, roughly a year later, his decision appears to have paid off. Smith, 38, has steadily gathered a devoted following and while he’s headquartered in Stanly, his business, Cafe Smiths, has traveled for events across the region, including in Troy, Biscoe and Candor. Smith estimates he’s served upwards of 5,000 people.

The food truck is best known for chicken wings, with flavors including mango habanero, lemon pepper and honey barbecue, Philly cheesesteaks and Philly cheesesteak fries. Other popular items include pineapple bowls (grilled shrimp or chicken with a teriyaki glaze, white rice and sautéed vegetables inside of a pineapple), ribs, fish sandwich (tilapia, whiting or croaker) and steak and shrimp. 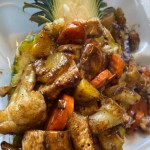 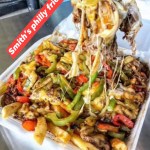 “I always had a passion to run my own restaurant…and then I also have a passion for people,” Smith said, “so what better way to be able to communicate to people than to have my own business.”

The business was also a way to provide for his family, which includes his wife Arneisha, who helps him with his business, and his eight children.

Smith, who is originally from Montgomery County but now resides in Stanly, said he’s been cooking for the past two decades.

Ever since he was 16 and worked in a restaurant in Robbins, where he cleaned bathrooms, Smith has slowly climbed his way up the ladder in the food industry. He eventually became a cook and worked at all sorts of places, from the traditional fast food establishments like McDonald’s and Papa Johns to larger, more-upscale restaurant chains like Lone Star Steakhouse & Saloon, Applebees and Chili’s.

“I’ve done just about everything,” he said, noting he’s worked in at least 10 restaurants during his career, several of which he served as manager. “I was always inspired to work my way up.”

As he continued to add to his culinary resume, his main goal of opening his own restaurant never changed. He was just waiting for the right time.

In January 2020, Smith was working for Clayton Homes, when he was involved in a small car accident. Though he was not seriously injured, the incident provided Smith with some much-need perspective about his future.

“It was basically like a door opened, like okay, well you got in an accident and here’s an opportunity to step out on your own and go for it,” Smith said.

He had previously cooked for people at his home and at various events and fundraisers in the community, so he knew there was an appetite for his type of food. As a member of the board, Smith is active working with the South Albemarle Ministerial Alliance (SAMA) to feed the community through efforts such as bread giveaways and distributing USDA food boxes.

A few months after his accident, Smith was picking up food boxes for the group when he met a man who went to his church, Resurrection Community. The two had several subsequent meetings and conversations and eventually the man, who asked not to be disclosed for this story, became Smith’s angel investor. He helped Smith purchase a food truck in Charlotte, totaling around $16,000, enabling him to finally pursue his dream of running his own business.

“He was definitely God sent,” Smith says about the man.

As a person of faith, Smith also believes all of his past experiences were meant to happen to get him to where he is now.

“I truly believe God was setting the foundation and training me to where I’m going now,” he said.

Smith enjoys feeding as many people as he can including the homeless and nursing home residents. He has participated in events throughout Stanly and surrounding counties, including Food Truck Fridays at City Lake Park, Juneteenth celebration in Badin and the farmers market in Troy. Cafe Smiths has also been a presence on the weekends outside the new Badin Brews in downtown Albemarle. 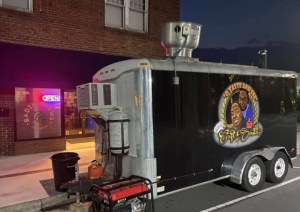 Smith eventually hopes to acquire a second food truck to expand his business since there’s such a demand for his food.

Though it’s been rewarding, operating the business has been harder than Smith expected. Compared to the typical brick-and-mortar restaurant, which usually has at least a dozen staff, if not more, Smith and his wife are the only employees.

“It’s more work than people really think it is,” he said.

But he would not have it any other way.

“It’s such a blessing just to be a help to the community,” he said. “That’s my heart, that’s my passion, to give back.”