HEALTH: How a near-death experience with COVID-19 changed a woman’s outlook on the vaccine

Between conspiracy theories, misinformation across social media and the thought that COVID served as a political platform, Tara Jones was conflicted.

Flashback to the summer of 2020 when her beliefs were aligned with her friends, neighbors and family members: She didn’t believe the virus was real.

“That’s how foolish we were,” says Tara, a Cherryville resident and practice manager at Atrium Health Gastroenterology and Hepatology – Cleveland. “I listened to the news and read statistics. I got first first-hand information. But we’re in such small town and a lot of people were in disbelief for whatever reason. A lot of people thought it was politics.” 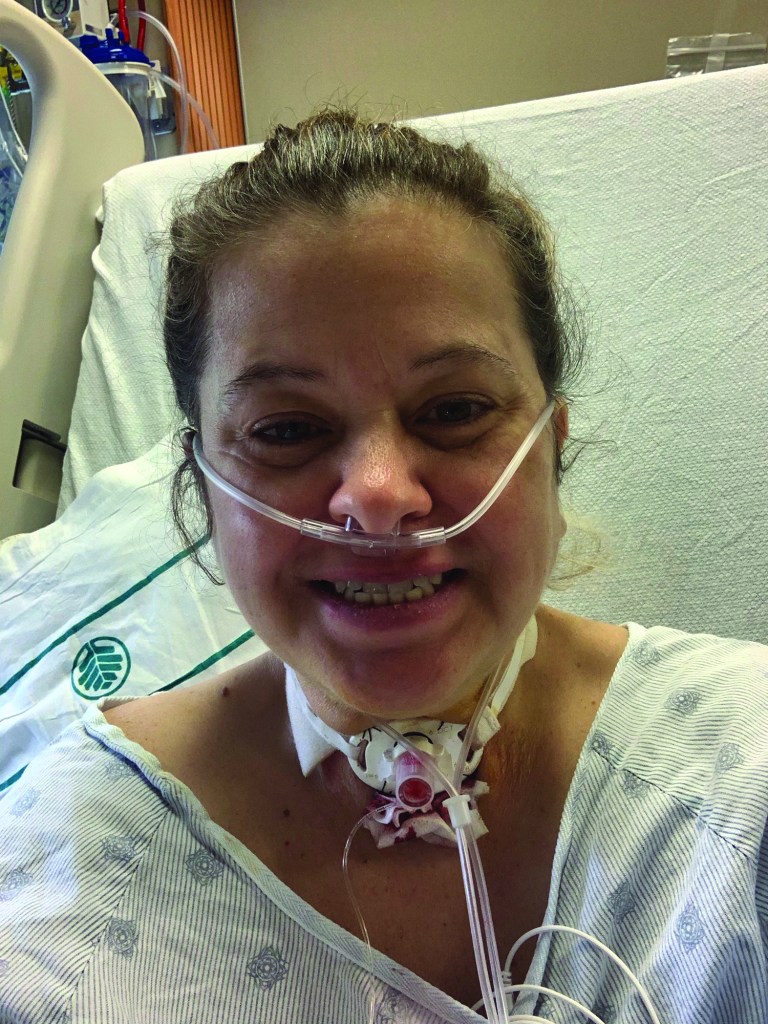 Tara Jones didn’t believe she’d ever catch COVID-19 and had no plans to ever get the vaccine. But after recovering from a severe case of the virus that nearly took her life, she’s fully vaccinated and is encouraging others to do so as well.

Vaccines were still nearly a year away, but the timeline was irrelevant to Tara. She didn’t think she’d ever catch COVID-19 and she didn’t intend to get the vaccine — whenever it became available.

“We did not see a whole lot of COVID-19 around here,” she says about her small town. “Mostly mild cases. But you have a lot of people who think this is government-led and it’s not real. I still hear people saying that.”

Now, after enduring a long and difficult battle against COVID-19, Tara is fully vaccinated. She also takes every opportunity to speak up and try to help individuals overcome the beliefs she once held.

Not the vacation Tara envisioned

Tara was getting ready for a week-long vacation on July 12, 2020, when she began to experience shortness of breath. Her temperature was 104 degrees when she arrived at urgent care, a day after having no fever at all. She tested positive for COVID-19 and was taken to the emergency department at Atrium Health Cleveland.

“I didn’t know what it would entail,” she says, “but from working at my office I knew it could either be mild or it could be very serious.”

Unfortunately, it was the latter for Tara, who was overweight, asthmatic and a diabetic. Her body was shutting down and she was placed in the ICU less than two days after testing positive. Prior to being put on a ventilator, she made some calls.

Tara understood the significance of the ventilator but knew it was her only fighting chance.

A ventilator is used in the most serious COVID-19 cases in which patients are not getting enough oxygen. Patients are sedated before a tube is inserted into their trachea, which is then connected to a machine that pumps oxygen into their lungs. And while there are patients who unfortunately do not survive on the ventilator, it’s often the best possible option for patients with the most severe cases of COVID.

Tara spent 24 days on the ventilator, suffering through nightmares, confusion, and a sense of alternate reality.

“There aren’t enough words to describe how horrifying that is,” she says. “I call them my COVID-19 dreams. I thought my husband had been killed. I thought the world was shut down. When you’re coming in and out of it, hallucinations come into play, and paranoia. I’ve talked to several survivors who experienced the same thing.”

In addition to having a feeding tube, Tara had to undergo an emergency tracheotomy due to swelling of her airway from the ventilator. Confused and unable to speak, she tried pulling out her tubes.

After coming off the ventilator, going through 10 days of rehabilitation and having the tracheotomy removed, Tara was cleared to go home.

Her community threw a parade. Holding signs and ribbons, people lined up along the road near her home. They wore T-shirts that read “Mustard Seed Faith,” a reference to a biblical scripture with an underlying message that seeds (in this case, Tara) are persistent and never give up. Tara exited the car and entered her house with the aid of a walker.

But her battle wasn’t over yet.

Complications, another procedure and recovery

Tara was home for one week and the celebration ended; she was having a lot of difficulty breathing. She went in for an examination and it was determined that scar tissue had built up and attached itself to both vocal cords.

“It was basically like breathing through a straw,” she says. “I had to have another emergency tracheotomy. I went back home with a whole bunch of equipment — oxygen, humidifier, and all these things plugged to me. I had vocal cord paralysis and was looking at the possibility of living with a trach the rest of my life. I opted for surgery.”

Now, after two vocal cord surgeries — with a third and final procedure scheduled for August — Tara is almost all the way back. She’s back at work, eating, drinking and breathing on her own. Her tracheotomy tube was removed in February.

“My lungs are great,” she says. “I don’t have a lot of the scarring like a lot of other survivors have. Everything has healed up very nicely and I’m very blessed.”

Fully vaccinated as of Feb. 2, Tara has become an advocate in the fight against COVID-19. She‘s even been a guest speaker for a survival group. When she overhears people questioning the virus’s authenticity, or arguing against the vaccination, she introduces herself and shares her story.

“I tell them that’s the most dangerous way of thinking,” she says. “COVID-19 almost took my life. I didn’t have the mentality to comprehend. I couldn’t work the radio in my car. I couldn’t remember how to work the microwave. There so many things I had to relearn. It completely affects you in so many different ways that you aren’t aware of.”

When Tara can speak to people one-on-one, she says “they’re usually in tears with me” afterward.

She just wants people to have all the facts and all the information and understand that COVID-19 can take their life. She wants them to think about how their absence would affect their family and the community.

And she wants them to get the vaccine.

“They need to know the harm that COVID-19 causes,” she says. “They’re playing Russian roulette.”