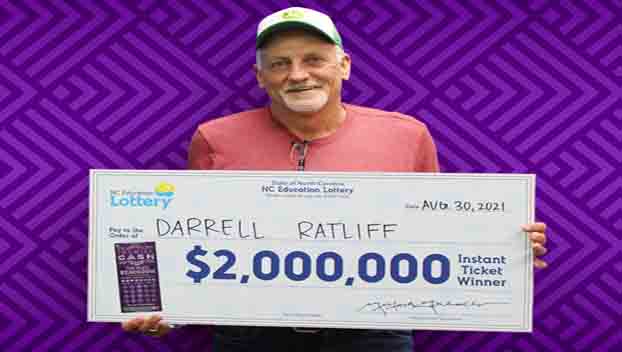 Darrell Ratliff won a top prize of $2 million in the N.C. Education Lottery.

RALEIGH –Darrell Ratliff of Wadesboro knows what it feels like to become the first winner of a Premier Cash $2 million top prize.

“It was an amazing feeling,” he recalled of winning. “I couldn’t believe it. I’m just really excited.”

On Friday, Ratliff purchased his winning $20 ticket from the Top Mart on Camden Road in Wadesboro.

He claimed his prize Monday at lottery headquarters in Raleigh.

“It really means a lot to me,” said Ratliff.

Ticket sales from scratch-offs like Premier Cash make it possible for the lottery to raise more than $900 million per year for education.

Anson County received $15 million in money raised by the lottery to help build the new Anson Middle School. For details on other ways Anson County benefits, visit www.nclottery.com and click on the “Impact” section.