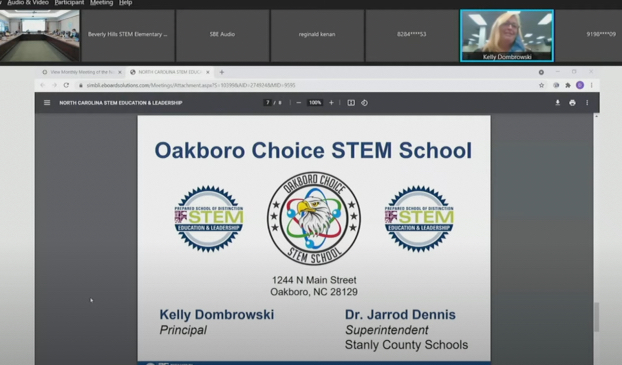 Principal Kelly Dombrowski spoke to members of the NC State Board of Education after Oakboro Choice STEM School was officially recognized as a NC STEM School of Distinction.

Oakboro Choice STEM School was recognized by the NC State Board of Education Thursday morning as an official NC STEM School of Distinction.

It was one of three schools selected across the state for the honor this year, along with Beverly Hills STEM Elementary in Concord and Snow Hill Primary in Snow Hill. It also marked the first time a Stanly school has received the honor.

“I’m honored to be here to represent a team of dedicated teachers, families, community partners and scholars who have worked tirelessly since opening in 2017,” Oakboro Principal Kelly Dombrowski told the members of the State Board of Education during its monthly meeting, which was held online.

Developed to identify and recognize exemplary STEM schools and programs, only roughly 10 percent of STEM schools in the state have achieved the honor.

After applying in February, the school learned just before spring break that it would become a STEM School of Distinction for the 2021-2022 school year. While it takes most STEM schools on average around four to five years to earn the distinction, Oakboro earned it in only about three and a half years.

STEM Coach Jennifer Crawford briefly spoke about some of the things students have recently accomplished, including helping hurricane victims through an English novel and solving problems that have emerged from the pandemic.

“Our community as a whole has embraced STEM,” she said, noting she always enjoys getting inquiring texts and emails from teachers and staff asking “Can I?” and “What if we?”

“I love going to a school where there’s a lot of focus on science, technology, engineering and math,” said Waits.

During his time at Oakboro, he’s enjoyed coding, building things out of Legos and working with various robots.

Schools that receive the honor undergo an application process which includes meeting five principles that are part of the STEM School Progress Rubric: Student Opportunities, Classroom Environment, School Structures, School Culture and Community Connections. The application is sent to a review board of educators from across the state.

Aside from being the first school in Stanly County to achieve the distinction, Oakboro joins a list of only a handful of other schools in the area, all in Cabarrus County, who are Schools of Distinction, according to the N.C. Department of Instruction’s list of recognized schools.