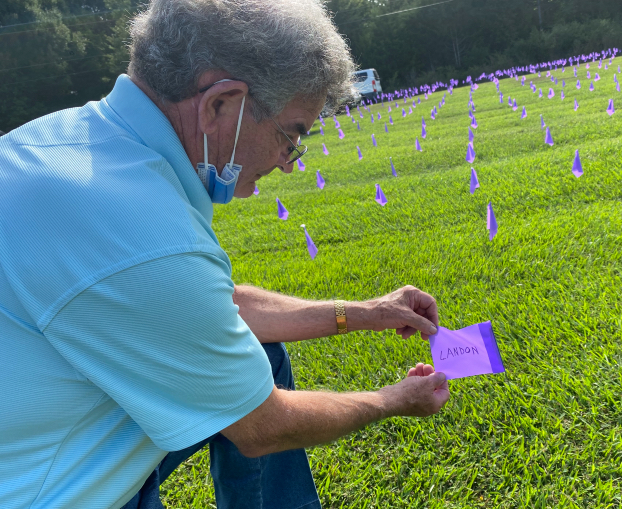 Jim Allred, co-founder of Bridge to Recovery, kneels beside a purple flag, revealing the first name of someone in North Carolina that recently died from an overdose.

Jim Allred has always likened Bridge to Recovery, a faith-based addiction resource center, to a lighthouse — it has helped save many people stuck at sea, struggling with addiction.

“When you walk around here among the clients, almost everyone of them would say this place saved my life,” said Allred, who co-founded the organization about a decade ago. “So in that sense, it definitely is a life saving station.”

Many individuals, both in treatment and those who have been in the past, along with employees and other community members gathered Aug. 31, which was International Overdose Awareness Day, at BTR’s treatment facility in Monroe. They remembered those who have lost their lives to addiction, particularly drug overdoses.

Opioid overdoses were up almost 40 percent in 2020, according to BTR. This year, an estimated 3,500 people in North Carolina will lose their lives to overdose. At the event, rows of small purple flags — representing the thousands of people who have died of an overdose over the past year — dotted the field. 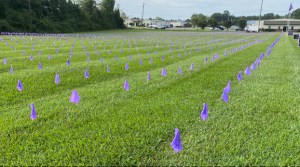 A sea of small purple flags dotted the grounds of BTR’s treatment facility in Monroe, representing people in N.C. that died from overdoses.

The struggles with people battling addiction over the past year only underscores the importance of why organizations like BTR, which provide life-changing hope and support to people, are so critical and necessary, Allred said. At any given time, BTR has around 30 people in treatment; that’s at least 30 less people who otherwise might be letting their addiction get the best of them.

Allred estimates that since the organization was founded in 2009, it has helped between 3,800 to 4,000 men and women — about half of which have come from outside the state.

Unlike other treatment facilities, where people might have to pay an exorbitant amount of money to stay for a short period of time, BTR and its two transitional facilities are free to anyone who needs them. The actual 30-day program costs $2,500.

The organization is able to continue to operate each year thanks to donations from individuals and organizations in the area, including many churches.

Many of the current patients, who could not disclose their names since they are still in treatment, emphasized what a blessing BTR has been to them.

One woman from Albemarle, who was about to finish her 30-day treatment program, said she had rotated through various treatment centers before hearing about BTR through word of mouth.

While BTR offers counseling and clinical classes like other treatment programs, one thing that has set it apart from others is the focus on introducing — or reintroducing — people to God.

Brian Dash, a recovering addict who went through treatment with BTR and helped supervise the transitional house in Oakboro, said the organization accepts people and “meets them where they’re at,” without any judgements because “broken people are broken people.”

Allred and the other members of BTR come to care for and love each person who enters treatment, which makes all the difference, Dash said, since so many of them too often feel “unlovable.”

“When you love on people, that changes their perspective,” Dash said, noting that people adapt different outlooks on life whenever they complete their treatment. “It’s a beautiful thing for sure.”

Dr. Lew Davis, the executive director, said that BTR’s mission is about more than just helping people recover; it’s about making sure that the opportunities are available for people.

The main philosophy behind BTR, Davis said, is that alcoholism and addiction “have nothing to do with alcohol and drugs. It’s about the mental, emotional, spiritual pain that we have inside us that were are trying to run from or numb out.”

With so many people having been isolated and separated from shared community spaces such Alcoholics Anonymous or Narcotics Anonymous over the past year and half because of the pandemic, anxiety and depression have skyrocketed, Davis said, which has resulted in many people struggling and going back to what they know best, which is their addiction.

To help accommodate more people, BTR is expanding its operations, working to build two new dorms at the treatment center, which will add another 24 beds, Davis said.

In a community letter shared to supporters, Davis wrote that BTR provides more than $25,000 in monthly treatment scholarships, adding that the organization spends more than $47,000 on services each month.

While BTR has acted as that steady lighthouse, providing hope, healing and recovery to thousands of people over the years, it’s also had a powerful impact on Allred, himself a retired Methodist minister.

All the good work he has done through the organization has helped Allred to “sense the presence of God in a broken world.”

For more information about BTR, visit thebridgetorecovery.org or contact the group at 704-909-8025.