‘It was just a phenomenal day’: Asciutto partners with Atrium Health to help vaccinate 56 people 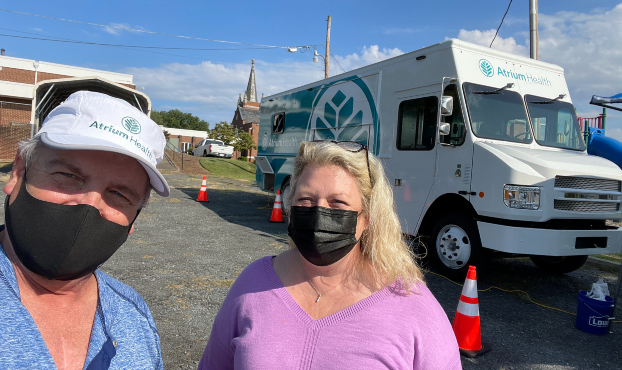 Hosting his second vaccination mobile clinic in partnership with Atrium Health on Thursday, Peter Asciutto wasn’t sure exactly how many people would show up.

He hosted a similar event earlier in the summer, which resulted in 33 people getting the shot. Asciutto, who is a community vaccine ambassador with Atrium, hoped for at least that many people this time around.

Much to his delight, the five-hour event resulted in 56 people in the community becoming vaccinated. That adds up to about one person getting the shot every six minutes.

The Pfizer vaccine was administered during the event. The vast majority of people received their first dose. The Atrium Health team will return Sept. 30 to offer second doses.

“It was just a phenomenal day,” Asciutto said on Friday. “It’s amazing how people just step up when you try to do good things.”

The event will help to boost the county’s lagging vaccination percentages, which are among the lowest in the state. As of Friday, 36 percent of residents are fully vaccinated and 39 percent have received at least one shot, according to state health data.

Asciutto said people of all ages lined up to get vaccinated and the crowd was fairly steady throughout the event. When he last posted an update on Facebook at around 6 p.m., 40 people had gotten shots, meaning an additional 16 got vaccinated during the last hour.

Atrium had to secure additional doses in order to vaccinate the last eight people, according to one of Asciutto’s many Facebook posts.

Several incentives were offered as a way to persuade people to get the shots, including a $500 drawing, Brooks running shoes and $10 gift cards from What-A-Burger.

Rick Green of Oakboro, who runs Hot Diggity Dog, received his first dose at the clinic after his wife got her first shot about a month ago. He also won the $500, but Green says the incentives played no role in him getting vaccinated.

While Green had mixed feelings about getting vaccinated and still believes the choice should be up to each individual, he said his wife encouraged him to get his shot.

Once the vaccinations got rolling, Asciutto decided Vac & Dash, his company, would donate $100 to Stanly Community Christian Ministry if 40 people were vaccinated and $250 if at least 50 people got vaccinated. He called Executive Director Heather Kilde, who supported his plan.

Word eventually spread and several people in the community reached out to Asciutto saying they would match Vac & Dash’s donation to the organization. One person donated $56, a dollar for every person who got the shot. By the end of the five hours, $1,300 was raised for SCCM.

“The consistent grassroot efforts of Peter Asciutto and the Vac & Dash team are clear indicators of their passion for the health of their community,” Kilde said. “The vaccine clinic held on Sept. 9 is an excellent example of how they utilize every opportunity to serve Stanly County. Not only did they provide a way for 56 individuals to get vaccinated, they also found a way to support our feeding programs that help others put food on the table.”

“I’m just totally, totally excited about what happened yesterday,” said Asciutto, who wants to hold another clinic with Atrium next month. “We really needed people to get vaccinated.”