Stanly educators share how 9/11 has been taught in schools 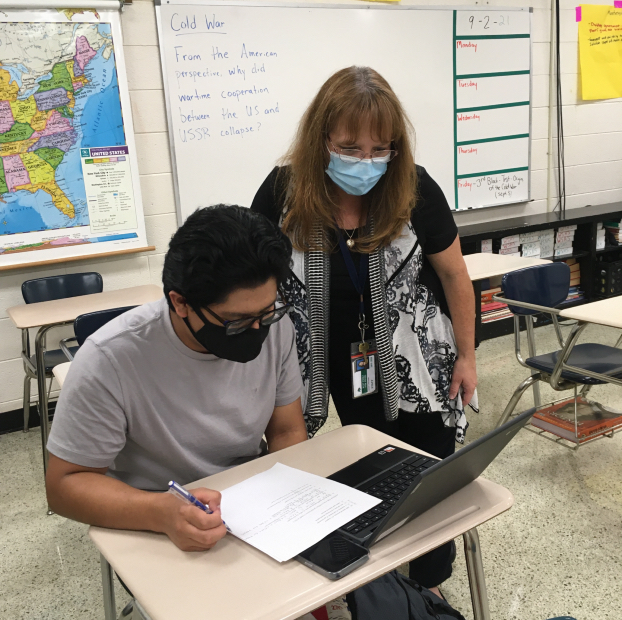 On what appeared to be just an ordinary Tuesday 20 years ago, Ashley Carter was watching “Good Morning America” in her living room while studying for an English exam she was about to take at Stanly Community College later in the morning.

Following a typical commercial about an upcoming “Nightline” episode, ABC quickly cut to GMA anchors Dianne Sawyer and Charles Gibson for a very atypical announcement: There was a report about some sort of explosion at one of the World Trade Center towers in New York City.

Millions of Americans, including Carter, watched in stunned silence as more information gradually trickled in revealing the full nature of that day: Two airliners, hijacked by terrorists, were flown into both towers while another flight crashed into part of the Pentagon and a fourth, intended for the White House, crashed in a Pennsylvania field.

“It was very sobering,” said Carter, who was a few months removed from graduating from North Stanly High School.

When Carter arrived at SCC, everyone was standing in the hallways, quiet and glued to the televisions as the world-changing events unfolded in real time. She recalls that her teacher’s husband was a pilot and so during those initial hours, she was worried about his condition and if he was safe.

Carter, who now teaches history at North Stanly, remembers that Sept. 11, 2001 was an abnormally quiet day as so many people were trying to process several unresolved questions: Why did this happen? Who orchestrated it and for what reasons?

Janet Lancaster was teaching Civics and Economics at Thomasville High School when a friend burst through the door, with tears in her eyes. “She said, ‘turn on the TV, turn on the TV,’ ” Lancaster recalled.  She turned the television on in time to see the second plane collide with the tower.

“When that happened, my normally rambunctious, very verbose children just went dead silent,” said Lancaster, who has taught history for about 30 years and now teaches at West Stanly High School. Her classes spent the rest of the day talking about terrorism.

Many parents rushed to pick up their kids from school, and even though Lancaster’s “Mama instinct” was to do the same with her small kids at daycare, she ultimately stayed at school to look after her students.

Lancaster had an exchange student from Germany at the time, and she remembers that his parents, who had little knowledge of American geography, frantically got in touch with the school, concerned that he had been impacted in some way.

For Carter and the many other Americans who grew up during that period, “9/11 was my generation’s Pearl Harbor,” she said.

Teaching about the attacks in schools

Carter teaches a variety of courses including Civics and Economics, World History and American History. She always tries to take a day to talk about 9/11 with her students — especially during the fall semester, and especially, if the calendar allows, on the anniversary.

While the 9/11 terrorist attacks have been listed as standards in the state’s K-12 social studies curriculum since around 2005, according to Lancaster, teachers generally have the latitude to decide how best to approach the topic.

Some teachers, like Carter, highlight the emotions of the day and what people were feeling, while others might remain more detached and just teach about the facts.

Carter said she focuses more on how people felt at the time than the actual events since most students already have at least a rudimentary knowledge of what happened.

“What I try to do when I teach it is I look at it like how we felt at that day and I look at it more from the shock value and how it really brought about patriotism,” she said. 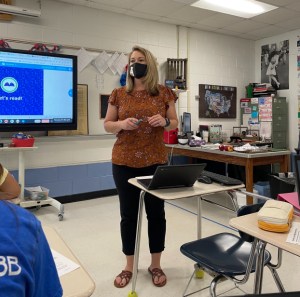 Typically on the anniversary of the attacks, Carter plays a video from “Good Morning America” as the students trickle in. She gives them no advance warnings, so once the real-time footage is shown of the towers exploding, it often draws legitimate reactions.

At times over the years, especially during periods of frequent school shootings and other attacks, Carter has adjusted her teaching style to give students more advanced notice before playing the footage.

“There were so many raw emotions because of the different school shootings and bombings where I didn’t want them to think it was real and cause added anxiety,” she said.

Carter also shares with the students her perspective about what the day felt like along with the personal testimonies from other people she has collected over the years, including her husband, who served in Afghanistan and Iraq, before having an open discussion with the class about what the day means to them. She also encourages the students to talk with their families and get their viewpoints about the topic.

This semester, Carter is teaching a class about key turning points in American history and she plans to conclude with 9/11 and the subsequent War on Terror. She has even asked her husband to come in and speak about the topic from a military perspective.

‘It really is a cathartic experience’

The perceptions and emotions regarding 9/11 have no doubt evolved over time, as generations of students with first-hand knowledge of the attacks have since graduated and more students born post-9/11 are coming of age. Similar to students studying long-ago events such as World War II or the Vietnam War, for each successive generation, the attacks seem to become less personal for students the more removed they are from when it occurred.

“To them, it’s just a historical thing that, yeah it matters, but it’s not as relevant as it used to be,” Carter said.

Lancaster, who is teaching Civics Literacy and a course on the Cold War this semester, has experienced that the further removed students are from the event, the more disconnected they are likely to become when discussing it.

But there are some exceptions: Lancaster had a few students several years ago who were from New York and were small children when the attacks occurred. One of her students talked about having the ash from the fire removed from his hair and clothes while being picked up from daycare due to his close proximity to the Twin Towers.

But it’s not just students. Carter mentioned that for young teachers coming into the profession, 9/11 will still be important to teach, but it may not have the same “relevance” as compared with veteran educators like herself and Lancaster who vividly remember what that day was like.

“On those big dates, sometimes you just have to stop what you’re doing and really make sure…the students don’t forget this.”

In addition to specifics regarding why 9/11 happened and what the impacts have been, Lancaster also describes what she was doing the morning of the attacks. She stresses the importance of handling the weighty topic with compassion and respect since there are students with family members that served overseas as a direct result of the attacks.

Unlike Carter, Lancaster doesn’t show video of the planes crashing into the towers, though she will usually show footage of the aftermath.

“For me, because I lived through it, it’s almost too real,” she said, noting the footage can also be painful for some of her students.

While it can at times be difficult to discuss, talking about 9/11 with her students “kind of reaffirms my faith in the human spirit,” Carter said. “To have that human experience and that shared time of being able to talk and share something with them” is incredibly valuable.

“It really is a cathartic experience to just be able to connect with them on a deeper level, even if it may just be for a day,” Carter added.

For Lancaster, not all historical events are necessarily equal when it comes to assessing the gravity of their impacts. She likens 9/11 to other seminal moments in American history such as the signing of the Declaration of Independence and the bombing of Pearl Harbor and said such momentous occasions should always be taught in schools.

“This is one of those points in history that we can’t ignore, that we need to make sure our students are aware of,” she said.

“I’m hoping that when my sons have kids someday, that this is one of the focal points for those students, too,” she added.