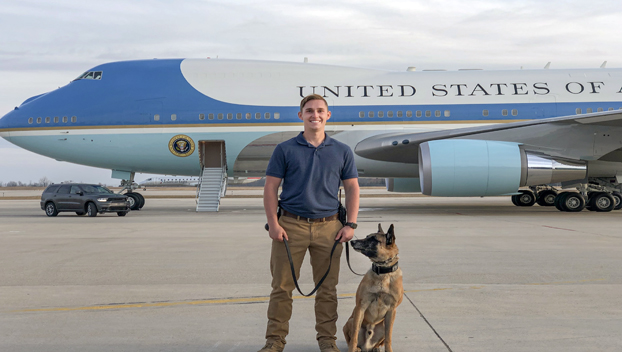 Blake McCarn of Stanfield is joined by his military working dog, Ggarbo. The pair recently retired from military service.

Collectively, Baxi and Ggarbo served 17 human years — or 119 dog years — in the U.S. Air Force providing narcotic and explosive detection across KAFB and the U.S.

“I’m going to Hanscom Air Force Base next, so the plan is to take him with me to Boston,” said Mead. “He’s going to live out his life up there and continue his physical therapy because he had surgery. So he’s going to have a nice life there.”

Staff Sgt. James Tienor, 377th SFS kennel master, who has been Ggarbo’s current handler for four months and was also his handler in 2018 for five months, spoke about his time serving with Ggarbo.

“It’s been a unique experience,” said Tienor. “My first time with him was definitely a learning experience. He had his own set of challenges and I got to see Sergeant McCarn work with him for roughly two years.”

At the retirement ceremony, Baxi and Ggarbo were both presented with an Air Force commendation medal, certificate of retirement and a toy for their service.

Lt. Col. Adam Morgan, 377th SFS commander, honored both dogs during his speech, in which he described their work history and accomplishments and expressed his gratitude for their service.

“Sergeants, we entrust grandfather Baxi and battle wagon Ggarbo to your care,” said Morgan. “Baxi and Ggarbo, thank you for your unrelenting service. We, your human and K-9 brethren, now have the watch.”