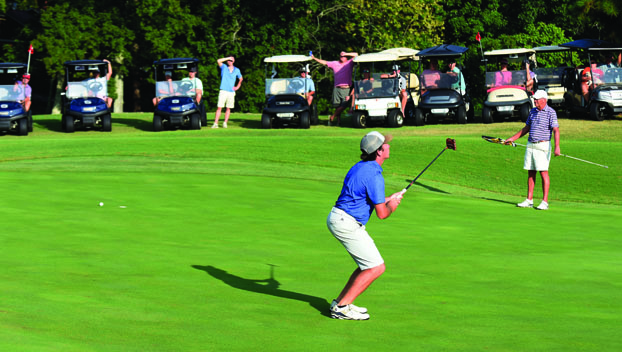 SALISBURY — In a Crowder/Dorsett Memorial Labor Day Four-Ball Golf Tournament that veered off course into a grinding, sweaty marathon, Chad Clayton, Catawba Class of 1996, the more seasoned half of a father/son team, was able to embrace the struggle better than anyone else.

It got hotter and tenser and more nerve-wracking with every 10-footer that swirled around the cup without dropping, and 40 Country Club of Salisbury carts doggedly followed four rapidly melting, weary golfers as they slogged through three extra holes. The Claytons, current Catawba golfer, Chase, is the younger one, finally outlasted the Derek Lipe/William Little team that won the 2020 championship and seemed certain to repeat for the majority of Monday’s climactic match.

“I was the old guy out there all week,” Chad Clayton said with a laugh. “Be patient, just be patient. That’s what I kept saying. It was a grind, but we were patient. Sooner or later a putt was going to fall for us.”

It wasn’t pretty at the end, but the Claytons got it done. They were seeded 14th out of 16 in a powerful Championship Flight, but it’s not like they became Labor Day champs with smoke and mirrors. They’re legit. They recently won a Father/Son national championship in a tournament at Myrtle Beach that attracted 800 players.

“We work very well together as a team,” the older Clayton said. “I just try to help Chad out on a hole here and there.”

Some awesome golf was played to get to that final match. The Ken Clarke-Chris Owen team squeaked into the Championship Flight as the No. 16 seed and then nearly ousted Lipe/Little in the first round. 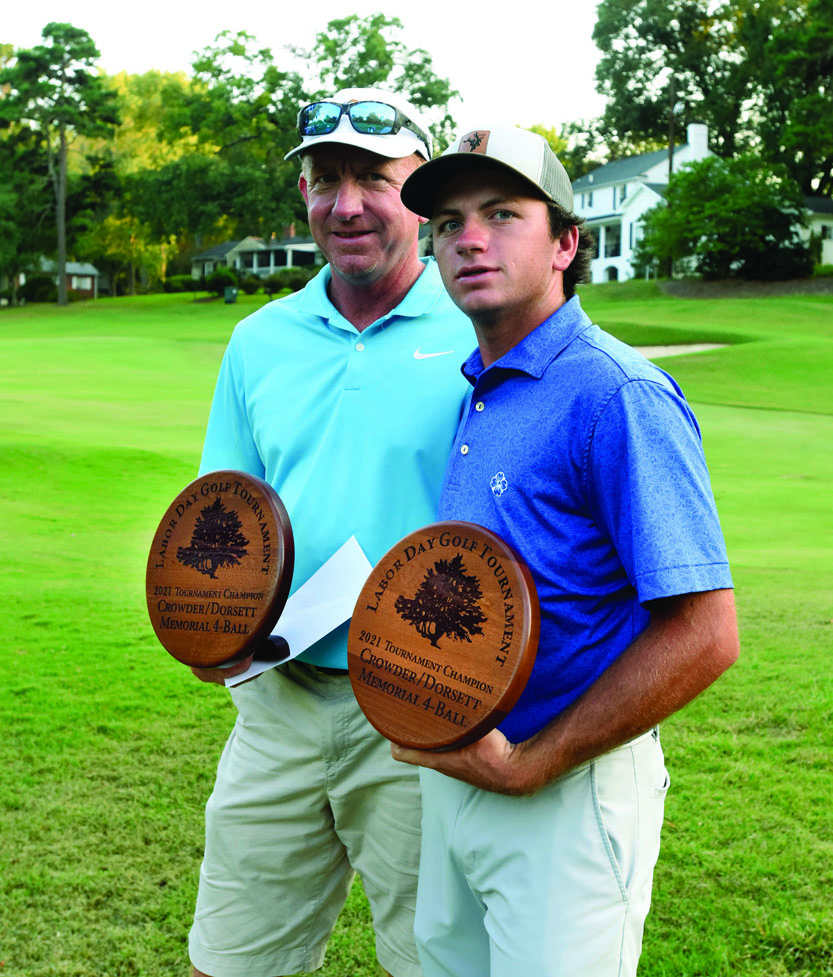 The Claytons, who shot a 69 in qualifying and had to make the Championship Flight in a playoff, clawed through a minefield of a draw, taking out two former Division I golfers Eric Edwards/Alez Nianouris in 19 holes, and then beating the young team of Charlie Barr/Will Fowler in 21 holes. The Claytons had to win those two intense matches just to get to Monday morning’s semifinals, where the opposition was provided by Lee Frick/Blake Wray, the team that won the tournament in 2017 and 2018.

“We didn’t do anything crazy out there,” Chase Clayton, a former West Stanly golfer, said. “We just made a lot of pars and we had no team bogeys all week. Great tournament.”

Little’s putter can be a magic wand, at times. Clarke said Lipe’s putter made the difference in deciding their tight, first-round match, and Lipe was draining putts most of Monday. Lipe/Little went three holes up on the Claytons at one point, but Lipe cooled off at about the same time that Chad Clayton started putting every iron shot close to the pin.

Lipe/Little headed to the par-4, 394-yard 18th, still holding on at 1-up, but Little’s second shot trickled off the front of the green and par became an elusive goal. Lipe was in fine shape in two, safely on and above the hole, but he left his downhill birdie putt well short, missed again and took a bogey. The Claytons calmly and routinely parred, and the match headed to the first extra hole, with the Claytons owning all the momentum.

It still took a while, even with Lipe’s putter ice-cold and Little trying to scramble out of trouble on every hole.

On that first extra hole, Lipe nearly chipped in from left of the green for a birdie that would have won the match, but he settled for a tap-in par to halve the hole.

On No. 2, there were lots of makeable putts, but no one made one.

“I played it safe, just put it up there close,” said Chase Clayton, who sank the match-deciding putt. “I was going to make them make a 15-foot putt.”

The awards presentation to the Claytons was made on the third green, rather than in the standard gathering near the clubhouse. That was a concession to COVID. Country Club of Salisbury head golf pro Chad Campbell said that while this tournament was mostly normal, “congregations and crowds” were minimized.

Still, the tournament was a glowing success by all measures, with one of the largest fields of entrants in recent memory. Sponsorship is still strong. Volunteers still respond to the call.

“It was a fantastic event,” Campbell said. “The weather cooperated. There was quality golf. It took a 69 to get into a playoff for the Championship Flight. It took a 79 in qualifying to even get in the field (for the Eighth Flight).

Among other interesting events, there was a Fifth Flight match decided on the finishing hole (No. 9) by James Bailey’s hole-in-one.

One of the staples of Labor Day golf is John Henderlite, who has won all three divisions. Henderlite and John Kyger repeated as champions in the Super Senior (65+) division.

Sisters Lily and Grace Yatawara may not play as much golf as they once did, but the former Salisbury Hornets still are a formidable team.

For a professional clothier (Lily) and a mechanical engineer (Grace), they swing with precision and power. They won their second straight Labor Day women’s division championship as a sister act.

“I only play once a month now — or maybe twice,” said Lily, who played in college at Appalachian State. “But I’m still doing OK.”

The Yatawaras beat Allison Adams/Brooke Busby in the semifinals 8 and 6 and won 4 and 2 against Montreat golfer Carmen Fraley, who starred at East Rowan, and former Montreat No. 1 golfer Sara Gwillim, who was playing with a hand injury.

‘We did pretty well, but we left some shots out there and the Yatawaras make a lot of birdies,” Fraley said.

Grace said she pulls out the clubs four to eight times a month. She passed up her last year of eligibility at ECU because she had a job offer in her chosen field.

Lily has been part of the winning Labor Day duo the last three years. Grace took a hiatus from the Labor Day event while she was playing for East Carolina, but she’s been on the winning team in seven of the 11 women’s tournaments since they began in 2011. She played with Adams the first five years.

“We played 28 holes today and we had eight birdies and two eagles,” Grace said. “That’s not bad.”

Lily said her most memorable shot of the day was rolling in a downhill 15-foot putt on No. 4 for a birdie.

“They had a shorter birdie putt, but making that one took some of the wind out of their sails,” she said.

Grace did some wind-taking of her own with eagles in both of Monday’s matches. She eagled No. 3 and No. 4.