Stanfield will hold a public hearing next month to discuss whether to approve an updated Land Use Plan for the town.

The plan, which was submitted by the Land Use Committee and the Planning and Zoning Board after about five years of engaging with the community, calls for eight changes from the current land use plan, which was adopted in 2007.

Commissioner James Kluttz presented and explained each of the proposed changes to the council at the town’s September meeting: 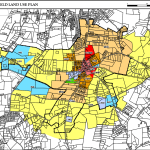 Stanfield Land Use Plan that was adopted in 2007. Image courtesy of Bridgette Helms. 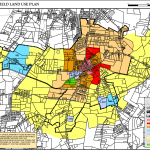 The updated Stanfield Land Use Plan with 8 new changes that will be up for adoption next month. Image courtesy of Bridgette Helms.

The council will vote on each of the eight proposed changes during the next council meeting on Oct. 7. Once the land use map has been approved, a written plan will be updated and presented to the planning and zoning board no later than the second monthly meeting held after council approves of the map.