An Albemarle native at East Carolina University’s Brody School of Medicine has been awarded the university’s most prestigious scholarship.

Quashawn Chadwick has been chosen for the Class of 2025 Brody Scholar award, valued at approximately $118,000.

As a Brody Scholar, Chadwick will receive four years of medical school tuition, living expenses and the opportunity to design his own summer enrichment program that can include travel abroad. The award will also support community service projects students may undertake while in medical school.

Since the program began in 1983, 150 students have received scholarships. About 76 percent of Brody Scholars remain in North Carolina to practice, and the majority of those stay in eastern North Carolina.

Chadwick brings a unique background to medicine with his bachelor’s and master’s degrees in music education. 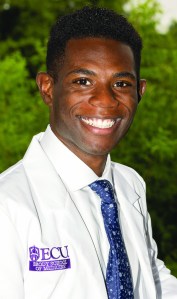 Chadwick graduated from the University of North Carolina School of the Arts, and decided to pursue medical school while he served in the Artist Corps between 2016 and 2018.

“I was engaged with young students and the emphasis of the service was on education, childhood development, emotion, learning, and the brain,” he said. “I started reading a lot of scientific literature and decided that I wanted to work in psychiatry.”

Chadwick also attended UNC–Greensboro and found avenues for exploring a variety of different interests as he considered his future plans.

“I’m interested in many things, including biochemistry, physics, linguistics, literature, music, philosophy and phenomenology,” he said.

He traveled to Europe and Canada during college for music festivals, received a certificate of fluency in German in 2017, published a series of poems in an anthology called “Grosse Fugue 3” in 2020, presented genetics research at an invitro biology conference in Tampa, Florida in 2019 and won second place at a research competition at UNCG that same year.

He said he hopes to use that same hunger for discovery in his studies in the Brody School of Medicine.

“I hope that I can distinguish myself with and develop in my specific interest of contributing to scientific literature, serving at-risk populations and continue to engage with young students, while at the same time keeping up with the pace of such an intense curriculum at Brody,” Chadwick said. “I hope to be a zealously empathetic and sensitive psychiatrist and to publish on many topics in mental health that interest me.”

Chadwick said he also hopes his fascination with psychiatry translates to excellent care for his future patients.

“I am especially interested in the ways that our emotions create and are informed by internal biochemical states,” he said. “I am curious about the ways a student’s brain is physically and visibly shaped by their emotions and experiences slowly over a long period of time, and the implications such could have on their ability to thrive and succeed in school, career and life.”

Wherever his path takes him, Chadwick plans to enjoy the experience as a Brody Scholar.

“To me, being a Brody Scholar means approaching every interaction and step on my journey to become a physician with enthusiasm, curiosity, professionalism and sensitivity to represent and stand in solidarity with my peers,” he said.