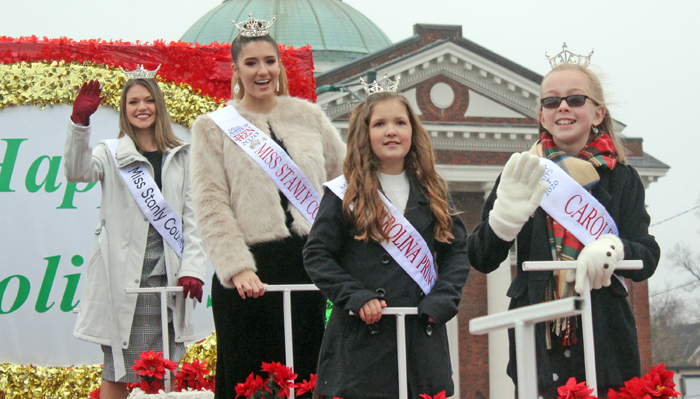 Following two years as Miss Stanly County’s Outstanding Teen, Shelby Sides will give up her crown this week as the Miss Stanly County Scholarship Pageant resumes Saturday after not having a competition last year due to the COVID-19 pandemic.

Sides, who won in 2019 in the first pageant in which she ever competed, has mixed feelings during her final days with the title.

“I’m excited and anxious at the same time,” she said. “The first year went by incredibly quick and then once we found out that we would have a second year of our reign…it seemed like it was going to take forever for this day to get here and slowly but surely it’s just crept up on us and now it’s here.”

Sides said she’s already met with and imparted advice upon the new batch of young contenders that will be competing to become her successor as Miss Outstanding Teen.

“I’m excited to see who the new one is, but I’m also sad at the same point because even though I have been in it for two years…I’m going to miss the whole Stanly County organization family that we built and our relationship that we have.”

Due to her extended reign, Sides has also grown closer with her fellow title holder, Karie Grace Shields, the reigning Miss Stanly County. Having already known each other before the competition in 2019, Sides said it was cool to “be crowned next to someone that I already knew and someone that I knew had been in pageants for a while.”

Referring to Shields as her mentor, she mentioned that they both have been able to lean on and help each other during the past two years.

“I think we both took a little bit of something from each other and just having that support from her was absolutely incredible.”

Since becoming Miss Outstanding Teen, Sides, 18, has been raising awareness about the dangers of bullying, something she personally experienced in middle school.

When Sides first decided to compete two years ago, she wasn’t aware that she had to advocate for a cause, also known as a social impact initiative, until she began completing the paperwork.

“I thought, what’s something I’m really connected to and passionate about that, if I did win, that I could continue to push this and advocate this for my year of service,” she said. She quickly decided to spotlight the issue of bullying.

It was only after competing and winning that Sides felt comfortable enough to speak out about her own personal struggles with bullying.

“I’ve never really felt like it was safe for me to talk about. I didn’t really feel comfortable talking about it and I didn’t think anyone would want to listen to me,” she said. “When I was given this amazing opportunity, I just knew that’s what I had to push. I knew it would give me this amazing drive…being able to do it based on life experiences I’ve had has really helped me a lot.”

Once she was Miss Outstanding Teen, Sides tweaked her platform title from anti-bullying to “One Word, One Second,” a concept she personally created herself.

“It only takes one word to hurt somebody and one second for a reaction that can’t be undone,” she said.

Sides has talked with several schools about creating their own “One Word, One Second” clubs and she is working on a website to help raise donations to support clubs in the community. She has also been talking one-on-one with students who, like Sides, have experienced bullying.

Even though her time as Miss Outstanding Teen is about to end, Sides said she plans to take a short break before coming back to compete for the title of Miss Stanly County.

Sides is a sophomore at Stanly Community College where she’s studying business administration.