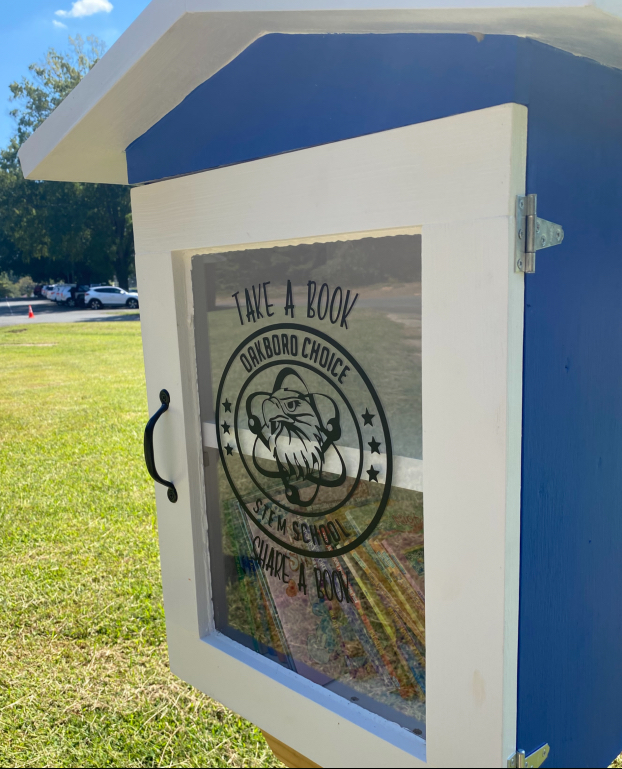 Wanting to spread her love of reading to others, Anya Bullock built a Free Library at Oakboro Choice STEM School over the summer. Photo courtesy of Ashley Wilkinson.

A former Oakboro Choice STEM School student has taken her love for reading to a new level as she recently built a free library at the school for the public to use.

Anya Bullock, who graduated from Oakboro Choice last school year, noticed that during the COVID-19 pandemic, many students didn’t necessarily have books available to read at home — especially when schools and libraries were not open.

After talking with teachers at the school and doing her own research, Bullock learned that, unlike herself, many other students don’t have a steady supply of books at home that they can read and enjoy.

“Not everyone has equal access to reading books,” said 14-year-old Bullock, who is now a freshman at Stanly Early College.

Bullock wanted to spread her love for books to others in the community, especially students.

She soon learned about Little Free Lending Library, a nonprofit organization that has helped expand book access through a network of volunteer-led Little Free Libraries.

The Free Library’s free-standing model seemed like a great fit for the school so Bullock decided in the early summer that she wanted to build a library at Oakboro Choice to benefit both the students and the surrounding community.

She planned her design and presented her idea to the Principal Kelly Dombrowski. Once she received the go-ahead, Bullock then sought and organized donations for materials and books, and partnered with many people to build and install the library.

Brian and Sandy Brown of Brown’s Woodworking in Albemarle donated the wood for the library and Oakboro residents Mary Doyle and Courtney Davenport donated the vinyl work for the door. 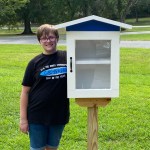 It took several months, but the library was officially installed on Sept. 19 along the side yard of the school. The library is painted blue and white and has the school’s logo with the eagle plastered on the front, along with the words “Take A Book” and “Share A Book.”

Bullock also created a brochure, which is included in the library, to help others see the need for literacy in the community. The goal, she said, is for anyone to borrow the books to read, not just students at the school.

Thanks to her efforts building the library, Bullock was also able to achieve the Silver Award, the highest award a Girl Scout cadet can earn. Bullock is now a senior Girl Scout in Albemarle Troop 1708.

Bullock should soon receive her charter number that officially registers the library with littlefreelibrary.org. There are currently 10 other such libraries throughout Stanly County.

As part of her project, Bullock will continue to oversee and maintain the library.