Norwood resident Mike Thompson, who passed recently at age 66 of COVID-19 complications, was never one to seek accolades or bring attention to himself. But those who knew him well remember him as a person of integrity with a strong work ethic and a fierce devotion to his family and friends.

After retiring from a 30-year career with the NC Department of Transportation, Thompson was hired by the Town of Norwood as its director of public works. 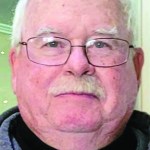 “A former teacher once told me that it is more important for a youngster to be a good person than a good student,” Smith said. “I’m here to tell you that Mike Thompson was a good person.”

Smith related that even when the two disagreed, they were always able to discuss their differences man to man and reach an agreement.

“I would drive down here (to Thompson’s home) and we would sit down and discuss it,” he said. “Mike didn’t take it personally if you disagreed with him.”

Another place Thompson’s character and integrity was evident was on the athletic field, where he served as a sports official for nearly 30 years, working primarily baseball and football, and earning high school state championship assignments in both sports. He also served as the North Carolina American Legion Area 3 Umpire-in-Chief for several years, assigning umpires to games throughout central North Carolina.

Cecil Mock of Asheboro was one of Thompson’s top umpires during that time.

“Mike and I worked baseball together, and later he became the supervisor for the umpires in American Legion Baseball, and he was a class act,” said Mock, adding that Thompson “was a genuine, authentic, good man.”

Concord native Chris Padgett, who worked all three sports with Thompson, said that the two of them had communicated “almost daily” for the past 10 years.

“More than officiating, Mike was a very learned person, on a lot of subjects,” said Padgett. “Yet, he never flaunted it. You found this out naturally in conversations with him.”

A recurring theme in conversations with those who officiated with Thompson was his ability to defuse potentially volatile situations — a talent many refer to as “game management” — without having to resort to ejections or penalties.

Fans often view the relationship between officials and coaches as adversarial, but Thompson defined the umpire’s role as that of a peacemaker rather than an antagonist.

“Mike earned the respect of coaches,” said Padgett. “He had a knack for applying common sense principles based on the rules at just the right time.”

“Mike was a genuine human being, and I really enjoyed working with him. He was easily approachable as an official and I believe we both enjoyed each other’s company out on the ball field. Mike was old school and he never would shy away from a questionable call or argument. He always kept his cool, stayed professional, let you say your peace and sent you back to the dugout when it was time. He would quickly turn the page and go right back to officiating as if nothing happened. When it came to arguments or questioning a call he realized and understood its place in the game. I really appreciated that from him.”

Thompson’s on-field demeanor demonstrated his enjoyment of the game.

“Mike was a man that showed up to officiate a contest because he loved it. It never seemed like it was just a side job for him,” said Yow, who also expressed his desire that new umpires emulate Thompson’s example. “I wish we’d get a younger generation of umpires that would follow in his footsteps. He is gone way too early and will be missed greatly.”