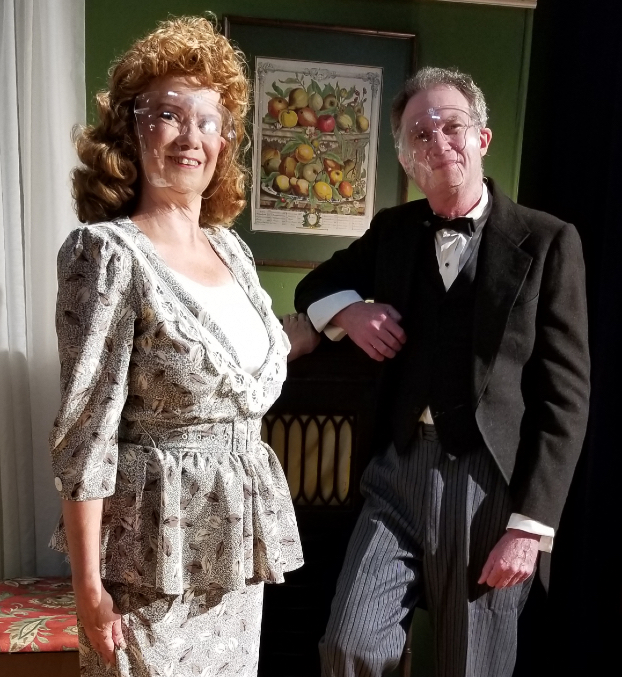 Lori and Shawn Van Wallendael who play the roles of Charles and Ruth Condomine. Photo courtesy of Della Freedman.

The Uwharrie Players return Friday for the start of its fall production, a dark comedy titled “Blithe Spirit.” This will be the Players’ second production since the pandemic began, after the Southern comedy “I’m Dying to Be in the Choir,” which ran in June.

The play, which was written by Noel Coward in 1941, is set in 1940s England and revolves around  writer Charles Condomine who, wanting to learn more about the occult for an upcoming book, arranges for a medium to hold a seance at his home. The woman ultimately summons his deceased first wife, Elvira. She soon clashes with Condomine’s wife Ruth, who can neither see nor hear the spirit.

“All the characters find themselves rather ‘spooked’ by their situation,” according to information about the play on the Players’ website, “and the seemingly benign events surrounding the séance quickly turn into a farce of supernatural proportions!”

“People can expect to leave the show with a little bit of Halloween spirit,” said production manager Jon Bowlby.

The play will be directed by Della Freedman, who has been involved with several productions over the years, most notably “Grease” in 1998. Some of her other directing credits with the Players include “James and the Giant Peach,” “Harvey” and “Deathtrap.”

Even though she lives in Charlotte, where she is an on-air announcer for radio station WFAE, her family has a unique connection to Stanly: Her father was sent to Albemarle to learn how to deal with hot temperatures before being deployed to the South Pacific during World War II.

“Albemarle has a special place in my heart,” she said.

Freedman said she’s happy to be back in Stanly directing another Players production, noting that one of her lead actors in “Grease” helped design the set for “Blithe Spirit.”

Freedman is very familiar with the play as she directed a version of it in Matthews several years ago.

“It’s an amazing tour de force of words and conversation,” Freedman said about the play. “It’s very unique in that it’s not only a farce, which is a comedy of words, but it’s also got a little darkness to it because there’s ghosts in it.”

Auditions were held in August and the cast — which consists of only seven actors — has been rehearsing four days a week since. Freedman said the cast, which has grown close over the many weeks, is “perfect” for the show.

“Whenever you do a play, you want the cast to feel like a team, that they can trust each other and that they can depend on each other,” Freedman said, “because they’re really putting themselves out there when they’re on the stage.”

The production, which is comprised of three acts, will last about two and a half hours and will feature two 10-minute intermissions, Bowlby said.

Masks will be required for all patrons in attendance.

Tickets can be purchased online (http://www.uwharrieplayers.org) and are also available at First Bank locations throughout the county, Second Street Sundries and Starnes Jewelers. Advance tickets are $13 for adults, $10 for seniors/juniors and $5 for children and $15 at the door.

The 2022 season will feature three productions: “The Odd Couple,” “The Diary of Anne Frank” and “Little House on the Prairie.”