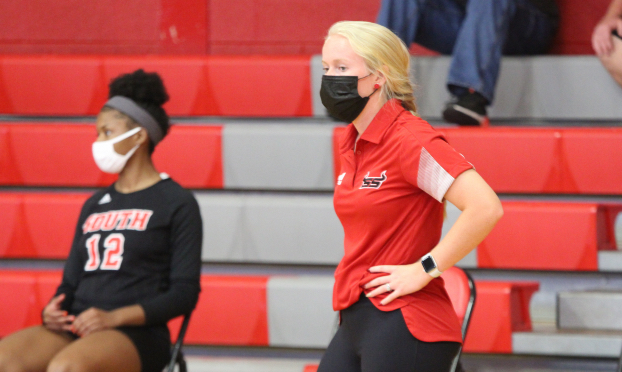 Allison Griffith has always had a love for volleyball.

Whether it was playing at South Stanly High School — where the team earned All-Conference honors her sophomore and junior years — participating in travel volleyball or enjoying sand volleyball, much of her childhood revolved around the sport, which she played year round.

“I sleep, eat and play volleyball, that’s what I did for a long time,” said Griffith, who first started playing it in middle school.

To her, the sport was an outlet, where Griffith could go to relax and tune out everything.

“You can just focus on what you’re doing and not all the stuff around you,” she said.

After she graduated in 2017, she went on to receive her associate degree in criminal justice at Stanly Community College before joining the Stanly County Sheriff’s Office and later Locust Police Department. She is the school resource officer at Locust Elementary, a position she’s held since late last year.

She joked during an interview last year with the SNAP about the growing pains of a South Stanly graduate working in West Stanly area.

Still having the itch to be involved in volleyball, Griffith over the summer approached South Stanly athletic director Sean Whitley to see if she could work with the team in some capacity, possibly as an assistant coach.

Her timing could not have been better since the school was actually looking for a new head coach for the volleyball team. With Griffith’s deep volleyball experience at the school, Whitley chose her for the job, much to her surprise.

“With my AD responsibilities, I was looking for someone that could take the volleyball program and run with it,” Whitley said. “I felt that Allison had the knowledge and the enthusiasm to be that person.”

While it was her first head coaching job, she did have some prior experience. Griffith spent several months in 2018 as an assistant coach with a club team headed up by her former coach Tom Gray.

“I was really excited,” Griffith said about the opportunity to coach her alma mater. “I didn’t expect to be the head coach. I walked in with assistant expectations and came out as the head coach. That caught me off guard a little bit, but it was cool.”

The volleyball team held informal open gym sessions in the summer before transitioning to official practice at the beginning of August. Its first game was against Montgomery Central on Aug. 16, a match her team won 3-1.

Once school started back in late August, Griffith’s schedule became a lot busier as she had to balance her duties as a school resource officer with her responsibilities as volleyball coach. Each day she leaves Locust around 3 p.m., and goes home to change clothes before heading to South Stanly for practices and games.

The first few weeks were exhausting, Griffith admits, but she soon got used to her new routine. While it took some time to adjust, she wouldn’t change a thing. Coaching at South Stanly has allowed her to reconnect with a sport she still loves and is passionate about.

“I go through the day and I can’t wait to be with my girls and play ball,” she said.

Griffith has learned how to better communicate with the students she’s around each day — whether they be at Locust or at South Stanly.

“Of course high school is different than elementary school, but you have to learn how to talk to these kids and their perceptions are different so…you can’t talk to every kid the same way,”she said.

Growing as a coach

The team is 11-5 after a 3-1 win over North Stanly Thursday night, including 5-4 in the Yadkin Valley conference, according to data from MaxPreps. Griffith’s goal during her first year is for the team to do well in the conference and make the playoffs.

“I’ve told my girls that we could be first in conference if they keep it up,” she said.

Whitley, the athletic director who also serves as assistant coach, said that Griffith has exceeded his expectations.

“She has so much energy and passion for the game of volleyball,” he said. “She connects well with our players and pushes them to achieve daily.”

Though she’s only been coach for a few months, Griffith has already gained some unlikely fans.

“Although we’re West Stanly supporters in this part of Stanly County,” the Locust Police posted on Facebook a few weeks ago, “it’s hard not to root for Officer Griffith, who’s doing an awesome job!”

Griffith said she has learned to be more patient and she has been working to cultivate open lines of communication between herself and her athletes.

“I have high expectations for them and I tell them that every single game,” she said. “They know what to do, they know how to play because they’ve played before.”

The team can also relate to having a coach who a few years ago was in their same position. During practices, Griffith actively competes alongside them, to set an example and show her athletes she is fully committed and invested in their success. 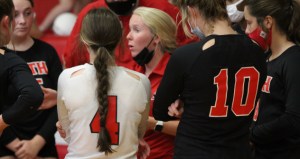 Allison Griffith talking to her team during a recent match. Photo by Charles Curcio/staff.

Since she is similar in age with many of her athletes, it is easy for her to blend in and look like just another member of the team.

“You can’t really pick me out because I look just like them,” the 23-year-old coach said, noting several of the players are already taller than her.

Griffith’s love for the game and her team has been infectious, with parents telling her they enjoy watching her jumping up and down screaming on the sidelines during matches. 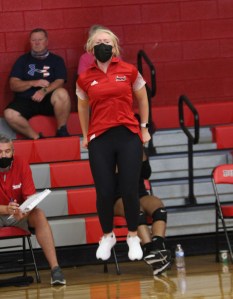 While the team is doing well, so, too, is the coach, according to Whitley.

“I believe that Allison will have a lasting impact on this year’s athletes and be a positive role model for our players for years to come,” Whitley said. “I’m excited to see where she takes the program.”