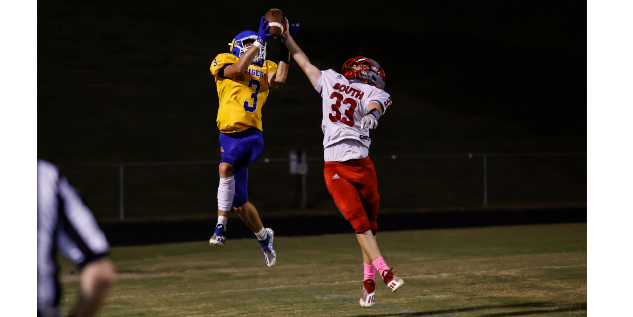 With the new split 1A/2A Yadkin Valley Conference in football, the six football-playing schools are in two different NCHSAA classifications.

North Stanly, Jay M. Robinson and Mount Pleasant will compete for the top bid in the 2A West Region, while Albemarle, South Stanly and Union Academy compete for the 1A West bid.

Friday night saw one of the 1A teams, South Stanly, go on the road to face a 2A YVC team, Mount Pleasant.

The Rebel Bulls struggled on both sides of the ball in a 44-0 shutout loss to the Tigers.

The shutout was the first for South this season; the Bulls were last shut out by North Moore last season. It was the fourth time in head coach Ryan Ochier’s four seasons with the team.

In terms of the overall series between the two teams, the loss was South’s sixth in a row and 14th in the last 15 games against Mount Pleasant. The Tigers’ win ties the lifetime series, 22-22.

The closest South (1-4, 0-1 YVC) got to Mount’s end zone was in the first quarter. An Ezra Powe kickoff return set South up at the Mount 44-yard line. The Bulls got down to the 27, before South fumbled, the first of three turnovers in the game.

Offensively, the host Tigers scored on six of eight possessions in the game along with a punt return for a touchdown by Keegan Moose. Quarterback Lawson Little was 8-of-15 for 151 yards and two touchdowns, while adding a rushing touchdown. Brennan Jones scored twice on the ground for Mount and T.J. Blackwelder added a rushing TD.

South played aggressively throughout the game, trying two fake punts in the first quarter which both came up just short of first downs.

“I told the kids if we have the opportunity to get it, let’s take it…it’s not a sit back and wait type of football,” Ochier said. “We’re going to try to set the tone in the game. It just didn’t work in our favor tonight.”

“He does a tremendous job with his kids. They respect him; they love him,” Ochier said.

“Bobby really got rolling in the second half, especially when we got up big. He could pin his ears back a little better,” Johns said.

The Mount coach said the Tigers, heading into a bye week before returning Oct. 15 to play at Albemarle, need to work on fundamentals along with playing fast, offensively and defensively.