Dedication ceremony for Charters of Freedom set for Oct. 12

Anyone walking past Albemarle City Hall lately has likely noticed life-size replicas of three of the founding documents of this country: the U.S. Constitution, Declaration of Independence and the Bill of Rights.

These documents, collectively referred to as the Charters of Freedom, are engraved on quarter-inch thick bronze tablets in shatter-proof glass and are across from the Stanly County History Museum. They were built thanks to Foundation Forward, Inc., a North Carolina-based educational non-profit.

The display is composed of the same brick facade as the city hall. The documents are enclosed in a permanent setting that is built to last more than 300 years. 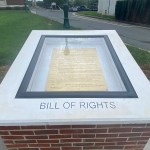 The Bill of Rights. 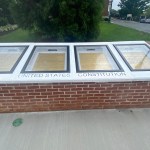 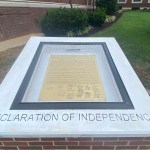 The Declaration of Independence.

Bricklaying students and alums from West Stanly High School, along with their instructors, played a key part in building the display.

The main goal behind these displays is to help educate the community about the country’s founding without them having to travel to Washington, D.C. to see the actual documents.

“We are an educational organization and we hope the school system will use this,” said Dr. David Streater, education director for the organization. “Also we hope that veterans groups will use it along with civic organizations and the general public.”

People from all across the country donate to the organization so there will be no direct cost to Stanly taxpayers.

Construction for the display began late last year and finished in August. The dedication ceremony, which will be held at city hall, is set for Oct. 12, though the pandemic could possibly change things. There will be a 30-minute prelude beginning at 5 p.m., featuring music from the Stanly County Concert Band. The actual dedication will start around 5:30 p.m.

“It’s going to be a phenomenal afternoon,” said Albemarle Mayor-Pro Tem Martha Sue Hall, who is part of a 14-member steering committee that has been regularly meeting to plan the ceremony. Other members include Mayor Ronnie Michael and SCS Superintendent Dr. Jarrod Dennis.

The hope is to also have veterans of various wars take part in a ceremonial cannon volley toward the event of the event.

Legacy pavers are also being installed in front of the Charters of Freedom for citizens to honor loved ones, active duty military or veterans, first responders, businesses or organizations.

Prices for the pavers range from $100 to $350 and can be purchased at chartersoffreedom.com.

Even though the display is based in Albemarle, it’s meant for everyone in Stanly to enjoy.

“This Charters of Freedom is going to be ours throughout the county,” Hall said.

Local elected officials, along with State Sen. Carl Ford and State Rep. Wayne Sasser, will be in attendance for the ceremony, Hall said.

Hall anticipates the event will last about an hour.

The site will also feature a time capsule containing letters from citizens, memorabilia from local groups and a signed list of everyone in attendance at the dedication. A smaller ceremony will be conducted about six months after the dedication for the sealing of the capsule.

The capsule will be opened on Sept. 17, 2087, which will mark the 300th anniversary of the signing of the U.S. Constitution in Philadelphia, Streater said.

Foundation Forward was founded about a decade ago by Vance and Mary Jo Patterson. The couple was inspired to bring the founding documents to people around the country after first seeing them in person at the National Archives in Washington, D.C. in 2011. The first Charters of Freedom setting was completed in Morganton in 2014.