The Albemarle City Council on Monday night took some time to formally recognize the new police chief, Jason T. Bollhorst, whose first day on the job was Monday.

Bollhorst, who fills the vacancy created by the retirement of Chief David Dulin in June, comes to Albemarle from the Newport News (VA) Police Department. He has more than 26 years of law enforcement experience. 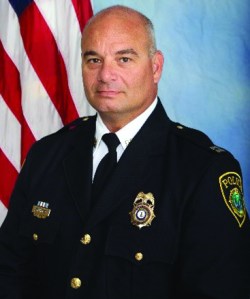 Former Charlotte-Mecklenburg officer David Poston, who has more than 28 years of law enforcement experience, had served as interim police chief over the past several months.

In looking for a new chief, City Manager Michael Ferris said an extensive search process took place over the past few months with applications being submitted from interested candidates all across the country.

“We had very, very strong candidates and a lot of candidates with good experience,” Ferris said, noting that as the evaluation process continued, it became more evident that Bollhorst was the right person for the job.

“It became clear that Chief Bollhorst has the right level of experience but also a personality and personal skills and a desire to be here and to serve this community,” Ferris said, adding that Bollhorst’s excitement for wanting to serve the community helped separate him from the other candidates.

Bollhurst told council that he and his family are excited to be living in Albemarle and that it already feels like home to them.

“I selected this city and this city also selected me,” he said. “Everything came together to bring me here to this city.”

Bollhurst has already spent time with Albemarle Fire Chief T. Pierre Brewton talking about how they can improve public safety in the city.

In other news, the council: