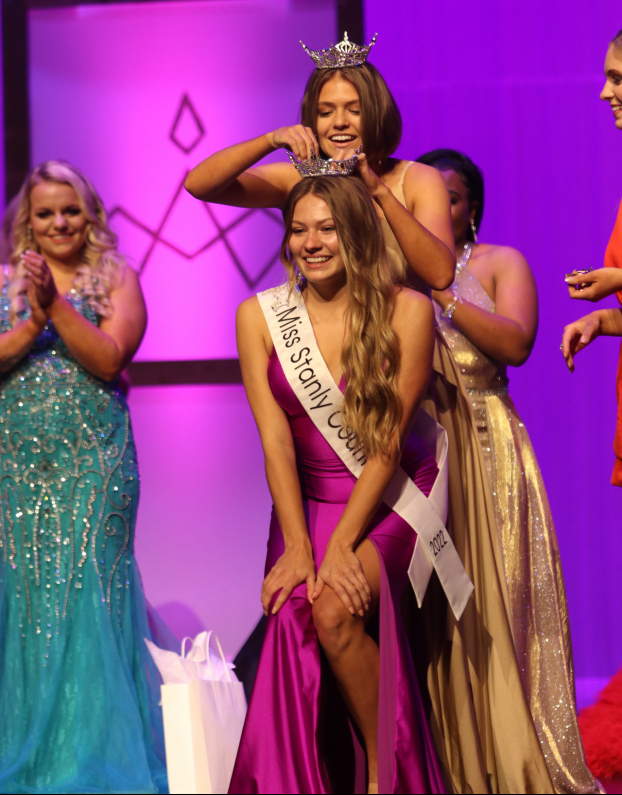 A bit of normalcy returned over the weekend as the Miss Stanly County Scholarship Competition resumed Saturday night at the Stanly County Agri-Civic Center, the first time its been held since 2019. Last year’s event was canceled due to the COVID-19 pandemic.

After competing in the competition the past two times it was held, the third time was the charm for New London’s Kate White, who was named the 2022 Miss Stanly County. Members of the audience were cheering as Shields crowned her teary-eyed successor.

Along with her crown and sash, White received a $1,000 educational scholarship and a $2,000 yearly in-kind scholarship to Pfeiffer University. While she plans to attend a four-year university after graduating with a business degree from Stanly Community College in December, she is debating a few options including UNC Wilmington and Pfeiffer.

White, who was one of seven candidates, has been in competitions since summer 2018, when she was one of the candidates in the Miss Stanly County Fire Queen competition in Oakboro. She admits she was less nervous this year than in the past because she knew what to expect.

“To be honest, I just tried to keep a humble mindset and I honestly went into this fearing that I would walk away with nothing again, but I also knew that if I didn’t do it I would regret it the entire year,” said the North Stanly graduate, who sang “Listen” from the musical “Dream Girls” for the talent competition.

Even though she had competed before, she was still “very surprised” when her name was called as the new Miss Stanly. 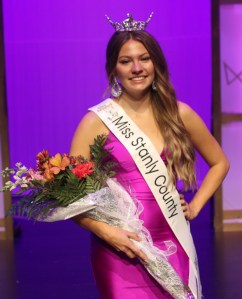 She appreciates the support of Shields, who helped encourage her to compete this year.

“She’s definitely somebody that pushed me to do it and really told me to believe in myself,” she said.

“She was very supportive before I even won,” White continued, “and after I won, you could tell she was really, really happy.”

Shields admits she was feeling many emotions Saturday night as she prepared to relinquish her duties as Miss Stanly County.

“I was excited to see who would join this amazing sisterhood and sad because I was watching a journey that I had been a part of for two years come to a close,” she said.

Shields was honored to pass the crown to White, whom she is confident will continue to carry forth the legacy of the previous title winners.

“I have met Kate White through this organization and I know she is going to do wonderful things,” she said. “I can’t wait to see her journey unfold.”

As an actress who has performed in numerous plays with The Talent Company over the years, she was most notably Jo March in TC’s 2019 production of “Little Women,” White plans to advocate for the arts and wants to help elevate arts education in schools.

“A part of my platform was expressing how much Stanly County is growing and expanding right now and how important it was for us to instill creative thinking into our youth…so that we can have a community that welcomes big ideas and dreams,” she said, adding that engaging with the arts allows people to “figure out who they are on a deeper level.”

While specific plans for her platform are still evolving, she plans to host arts and crafts workshops, organize various camps and several artistic competitions and wants to find ways to help beautify the county. She also wants to promote arts education within the schools.

Even though White is no longer performing for the Talent Company, she still maintains an active presence as a member of the organization’s executive board and has been working behind-the-scenes for the upcoming production of “The Little Mermaid,” which will premier later this month. She has specifically been helping to mentor members of the cast.

“My job has been to just pull them aside and really help them dig into their character and learn how to really become who they’re supposed to be on stage,” she said.

Though still in school, White hasn’t ruled out a potential career as an actor.

“If the stars align, of course, that would be the dream,” she said, “but I’m always looking at opportunities as they come.”

White will compete in the Miss North Carolina competition next June.

Aside from White, the other six candidates were Gracie Page, who was named the People’s Choice Winner and received a $300 educational scholarship and a $1,000 yearly in-kind scholarship from Pfeiffer, Deoveune Chappell, Jillian Speights, Crystal McCall and Hailey Clodfelter.

As Miss Stanly County’s Outstanding Teen for two years, Shelby Sides enjoyed having a platform to promote her anti-bullying agenda but was happy to “bless someone else with this amazing job.”

“I personally feel proud of myself for taking on the title of Miss Stanly County’s Outstanding Teen for two years,” Sides said, noting she gained “much knowledge and confidence” and can’t wait to compete again one day for Miss Stanly County.

Sides’ successor turned out to be Annika Schneider, a 16-year-old junior at Gray Stone Day School. This was her first time competing in the teen category, though she has been in numerous competitions and was a former Carolina Princess. 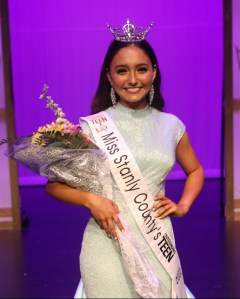 “It was a whirlwind of emotions and thoughts, but I think that the first thing that I thought was, ‘Okay, for the next year you are Miss Stanly County’s Outstanding Teen and you have this responsibility and you have this job that needs to be completed,’ ” she said.

She appreciates the support that Sides has already provided and mentioned the two have already texted with each other.

“I know Annika will represent Stanly County well and make us all proud,” Sides said. “I wish her all the best of luck as she begins her new journey and I welcome her to the sisterhood of this amazing organization.”

Schneider, who is from Stanfield, plans to promote the importance of reading and has already organized a book drive at her church, Stanfield First Baptist, where she collected 277 books.

“I know that I want to get into schools and talk to kids about my platform and about how reading can positively affect their lives,” she said.

The three other candidates that competed in the teen category alongside Schneider were Autumn Allen, Morgan Kimrey and Addie Eury.

The two title winners are excited to work alongside each other during the next year as they promote their respective platforms.

“I did not know Kate before, but I immediately loved her energy,” Schneider said, adding the two have texted a few times since they were crowned. “It has just been a pleasure and I cannot wait to serve this year with her.